Even when you're standing face to face with a work of art that shakes you up and leaves you breathless, the museum experience itself tends to stay pretty routine... and by routine we mean dull. Shuffle up to a certain work, creep to the front of the crowd, maybe snark at another visitor's pretentious opinion, and continue onward in silence. Saya Woolfalk's exhibition "The Empathics" is a clear exception. Roaming strangers stop each other mid-museum to ask "Is this real or fake?" while kids shriek between hysterical giggles, "Why are they wearing cloud pajamas?!"

Woolfalk's show begins with a myth: A group of women stumble upon a burial site in which the bones have a strange genetic chimerism. Their genetic material sprung from both the plant and animal kingdoms. The community's extended contact with the funghi-speckled skeletons incites psychedelic visions that then spur a metamorphosis into part plant-part animal hybrid creatures. The women study the transformation as it occurs and dub their kind the Empathics.

"It's a utopian idea, but it's also the way that cultures actually come into being," Woolfalk says of her legend. The Empathics undergo cultural appropriation to the maximum degree, their creative visions and ideas literally mutating their bodies. 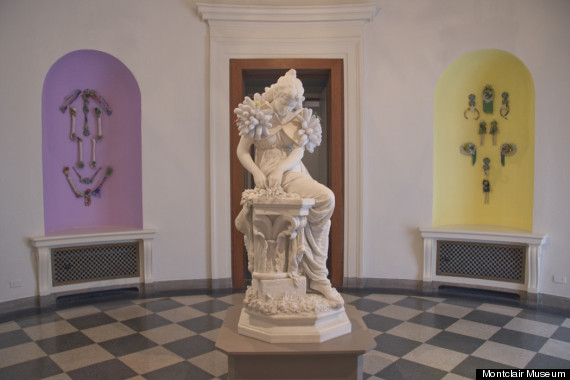 Viewers enter through a rotunda where a permanent, classical marble statue has been overtaken by funghi, resembling a shawl made by a phallus-happy Yayoi Kusama. The traditional entryway to the museum has been afflicted by a glittery growth, mimicking the utopian hybridization that dominates the show's content. Somewhere between haute couture and abnormal polyp, the statue's affliction foreshadows the melding of ornamentation of mutation that is to come.

The exhibition is set up like an anthropological study, reminiscent of the stuffed animal dioramas at the Natural History Museum or period costume displays at the Met. Even with fantastical, sequin-clad skeletons with masked faces and rainbow brite colors, the "this is science" atmosphere brings a truth quality to the experience that is hard to shake off. Grown people were asking the artist if the Empathics' story was true. A perfect technical, awkward computer guide was the final touch to creating a myth that almost morphed to fact.

According to Woolfalk's legend, after experiencing kaleidoscopic dreams, the Empathics grow second heads to better manage their hybridized understandings of the world. Neon painting their lucid visions adorn the walls alongside ornate sculptures of the Empathics in their omni-cultural garb. Donning mardi gras beads, silk kimonos, Brazilian fabrics and handmade paper pigment the Empathics are both DIY and ADD cultural mashup. Yet they all wear white converse sneakers and 90s cloud-printed pajama pants, adding a sense of familiarity and humor to the stunning creatures. They hide their seconds heads with— what else? a head basket— and document their transition in institutes devoted to the evolving species. 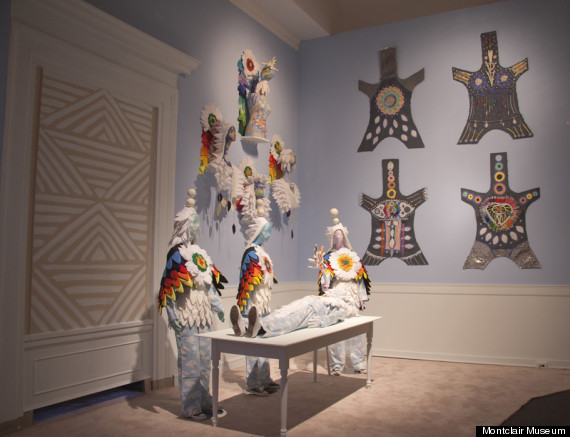 The Institute of Empathy features the Utopia Conjuring Chamber, in which Empathics guide each other in lucid dream explorations. A life-sized simulacrum of the ritual takes up the final room of the exhibition, alongside a video of the dream in action. What do Empathics dream of? Imagine a drug-addled Cirque du Soleil in space... with face paint and the hottest bazaar fashions. It's enough to make you want to grow a second head as well.

Nowhere in the exhibition does Woolfalk pull back the curtain and reveal the fact that the Empathics are in fact performance artists and sculptures, not actual plant-human hybrids. As a viewer, the desire to have the question cleared up is overwhelming, although the creatures could not be more surreal. Woolfalk suspends disbelief to an incredible degree, showing both the range of the human imagination and the authority of a museum as an establishment of history and truth telling.

Woolfalk's world draws off the museum's bones to create mythical hybrids that riff off the adjacent exhibitions. Georgia O'Keeffe's New Mexico paintings and the museum's permanent collection of Native American cultural relics look almost as if they could slip into the exhibition, especially if they grew a little fungus beforehand. 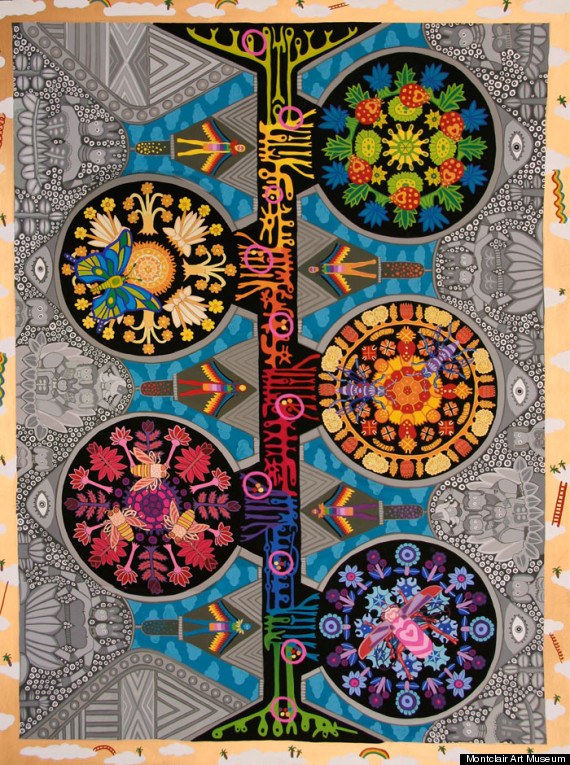 Woolfalk's show is the kaleidoscopic dream looming above a site devoted to art history, combining past, present, future and fantasy all at once. The Empathics turns the museum from a hall of silence and history to a playground of whispered myths and bungled truths that may or may not be real. We recommend bringing a child to serve as a pseudo-docent, they seemed to understand the multiform exhibition from the start.

Saya Woolfalk's "The Empathics" runs until January 6 at the Montclair Art Museum in New Jersey. Learn more about the Empathics on the Institute of Empathy website, a true gem.

CORRECTION: An earlier edition of this article referred to the exhibition as the Empathetics instead of the Empathics. We regret the error.