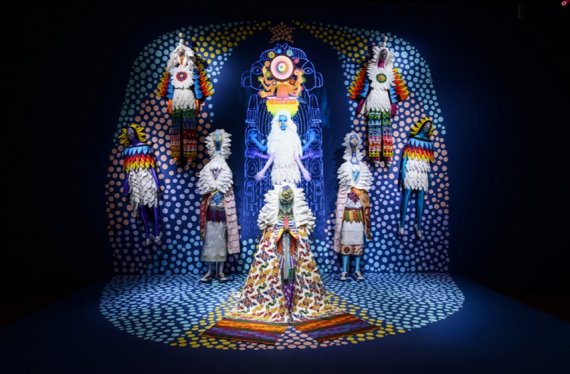 The artist, whose father is African American and white and whose mother is Japanese, conjures mythical utopias to explore ideas of race, sexuality, difference, hybridization, cooperation and creativity. Her multimedia works summon viewers on a multicolored trip through mythical research, bunk biology and bizarre costumes, exposing cultural rituals as the fantastical occurrences they have been all along.

Her 2012 exhibition "The Empathics" introduced viewers to a bizarre breed of women who, after encountering genetically unusual buried remains, begin experiencing psychedelic visions that transform them into part plant, part animal hybrids.

This uncanny species, dubbed the Empathics, are an extremely porous culture, literally absorbing their cultural influences and physically mutating as a result. When searching for an iconography suitable for her mythical breed, Woolfalk incorporated the mandala, a nest of squares and circles that, to many, represent the cosmos.

"For Buddhist practitioners however," the Asian Art Museum explains, "mandalas are not just images to view, but worlds to enter -- after recreating the image in their mind’s eye, meditators imaginatively enter its realm." 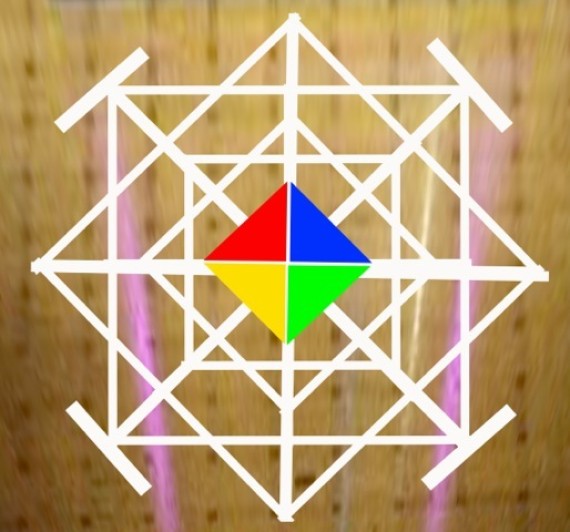 "It's been something I've been drawn to for a very long time," Woolfalk explained to The Huffington Post. "As I keep working on this project I keep thinking about early projects I did, even in college, where I was using this Buddhist, thangka painting structure. I grew up in Japan part-time and my grandmother is Buddhist and Shinto. She practices both everyday. We'd do these ancestral worship rituals every year and pray to the memory of my grandfather. She lived with shrines in her home. From a personal perspective it's always been part of the background in my life."

The fluid nature of thangka paintings made them the perfect symbol for the Empathics to eat up.

"Thangka painting became this symbol for a form that gets transported from location to location and actually transforms its iconography based on place. In India there are Buddhist thangkas, in Japan there are Buddhist thangkas, in Tibet there are thangkas -- but they're constantly evolving in relation to the stories of that location. You'll have the same structure but things will shift and change because the interests of the local people are slightly different depending on where you go. So that kind of became really interesting to me. These things we think of as a single object but are constantly transforming based on place." 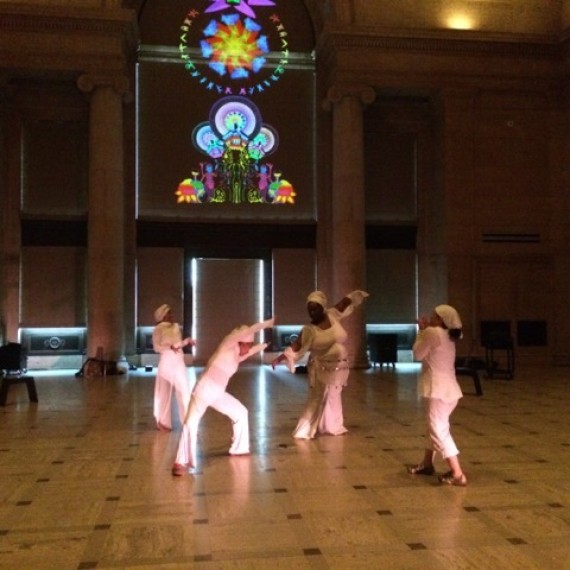 On Thursday, September 4, Woolfalk will present "ChimaTEK™: Hybridity Visualization Mandala," a living installation that invites viewers to experience visual hybridity in the form of a living, breathing mandala. The piece, in conjunction with the Asian Art Museum’s "Enter the Mandala: Cosmic Centers and Mental Maps of Himalayan Buddhism" exhibition, features four Bay Area dancers of different ethnicities and dance backgrounds, dancing atop a mandala taped to the floor.

But the dancers don't just dance on the mandala. They are the mandala. "When you actually watch the dancers -- words are great and important for framing -- but when you see the physicality of dancers in relation to each other. Sometimes it's impossible to get the dancers to coalesce. And that failure is actually part of their difference. That is also part of what I'm thinking of as visualizing of the mandala. The coalescence and impossibility of coalescence of these four actors." 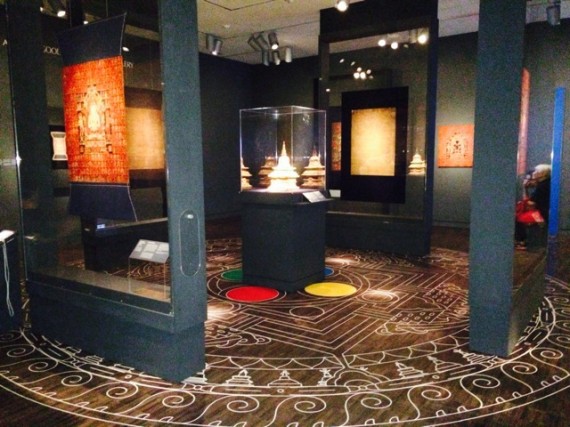 The piece invites viewers into a new level of consciousness. "The mandala is a teaching tool for the visualization of a specific form of consciousness. The idea is that as an audience member comes into the space they're not only inside of a mandala but they're actually seeing and visually experiencing these dancers as mandala. The physicalization of an idea of something."

The piece, co-presented by Headlands Center for the Arts, precipitates Woolfalk's upcoming exhibition at the Chrysler Museum of Art, also titled ChimaTEK™. 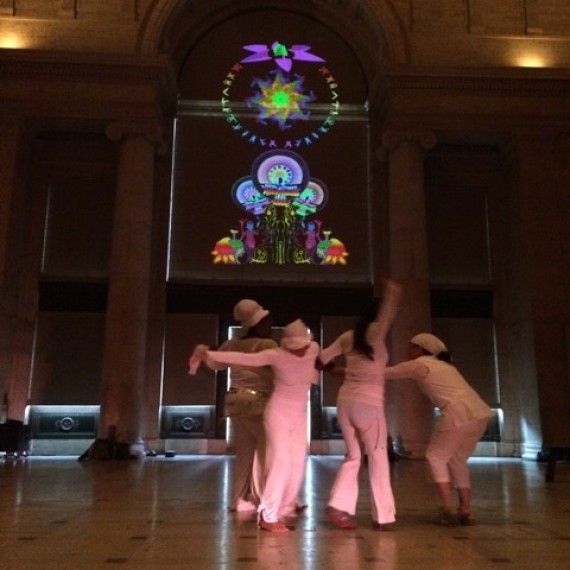 "ChimaTEK™ is the technology that the Empathics have produced to try and create a more mainstream idea of what the Institute of Empathy's research can actually do. Instead of being a nonprofit it's now a corporation and I'm trying to move it into more of a nefarious zone. Is this just happy multiculturalism? Is this an American desire for a utopia that doesn't really exist? There's a research institute whose intentions are good and now this corporation whose valence kind of shifts."

This is the magic of Woolfalk's work. For all its hallucinatory visions and kaleidoscopic colors, it remains consistently incredulous of its own existence. Straddling utopia and dystopia, cooperation and cultural appropriation, Woolfalk questions the possibility and direction of her fabricated universe, raising crucial questions about culture as it exists in ours.