Back in 1997, after seeing Alice Ripley and Emily Skinner do a television appearance, my mother said about Side Show: "Who would want to see a musical about freaks?" I was a student, not yet a professional writer, but I had gone. Not many other people did. Perhaps most shared my mother's thinking. I don't think, despite some positive reviews, it was ever a mystery to me why Side Show was a bomb. It was a failure because most people don't want to see a melancholy musical about the life of Siamese twins.

In 2001, Singapore had a hit with the musical Chang and Eng, centering on the twins about whom the term "Siamese twins" was coined. The show was at one point expected to come to Broadway, under producer Kevin McCollum's stewardship. 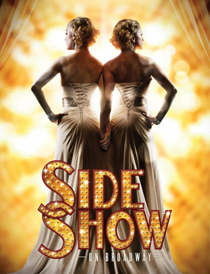 It never made it. Why? Well, I don't know. At the time, I heard they were trying to get the money together. I presume that never happened. I also presume it was because the commercial viability of a Siamese twin musical in the United States was already in doubt.

But, of course, Side Show came back last year. It closes Sunday, January 4, having played fewer performances that the original. I've thought a lot about this show and production over the past year. A fan of the original, I flew out to California to see the revival in November 2013. Never did I think what I saw would come in -- I liked it less than the original. I found very few of the changes to be good ones. The Act I look into the girl's past? I thought it stopped the whole act. The ill-developed side story about Buddy being gay felt forced. None of the replacement songs felt like real winners to me. All in all, I thought this was an inferior production of a musical that flopped the first time around. The critics didn't agree with me. The production got raves in La Jolla and even more effusive praise during its run at the Kennedy Center. A transfer seemed almost inevitable. The show nabbed one of Broadway's more desirable houses, the St. James, for a fall birth.

My mother, who now sees almost every Broadway musical, wanted to go. But she wondered why it was coming back, as it was such a financial failure the first time. I tried to explain as best I could. We're living in a different culture now, one where people regularly watch American Horror Story: Freak Show and would likely tune into a reality show on the same topic. There was also some hope that the name of director Bill Condon, a well-known film director, would generate interest. And then the reviews -- always people get sucked in by great reviews. Shows with great reviews fail financially a lot, but it's easy to get mentally tricked into thinking they will not. It's a big fallacy -- the whole "people will want to see shows that critics think are worthy of being seen" -- but it is a seductive lie. Producers and investors get sucked in by it. (Note that there are some producers/investors that put money in a show just because they think it is worthy, knowing it will not succeed. My friend put up money for Scottsboro Boys for this reason. He would have given that money to an arts non-profit, so instead he invested it in another cause he believed in, that show. However most producers/investors want to make money and they put on a show with the belief that it has a shot at that goal.) Plus, Side Show has developed a cult following in the ensuing years since its first run. Surely at least those people who love it so much would turn out and tell their friends who would tell their friends, etc.

Well it didn't work. Not that many people came and there was no upswing in sight. So, last week, I took my mother to see Side Show on Broadway. My mother looked at me afterwards and said: "It made me a little bit uncomfortable. And it was sad." Usually I get her to nod enthusiastically when I ask her if she is glad she saw something, even if that something was not good. This time, not so much. It was more a tentative agreement. I decided to go back and take a poll of theatergoers. Most critics loved it, but I wanted to see what the general public thought. Well, it turns out about 85% of gay men loved it, and only about 40% of people who seemed to be part of heterosexual couples liked it. (Note that I didn't ask people their sexuality -- I just went by stereotypical signs and displays of affection -- so this might be a little skewed.) I was going to go into a psychological analysis of why this might be so, but I'll spare you. Needless to say, this is not good enough stats to result in the type of great word-of-mouth needed to launch a show that won't on its surface appeal to tourists. This is especially so when even some of the people who liked it said they wouldn't recommend it, saying things like: "I liked it, but it was really sad, so I'm not sure I would send people." While I don't agree that musicals need to be "fun," they are not easy sells at "really sad" either.

And so it goes -- another production of Side Show leaves us. Its cult status will remain, untouched by mainstream attention. This is no surprise to those of us who follow such things. In fact, the surprise was that it came at all. For fans of the production, that was enough. For its producers, investors, creative team and cast, they clearly wanted more. I question how they could have expected it, but I'm sure they did.