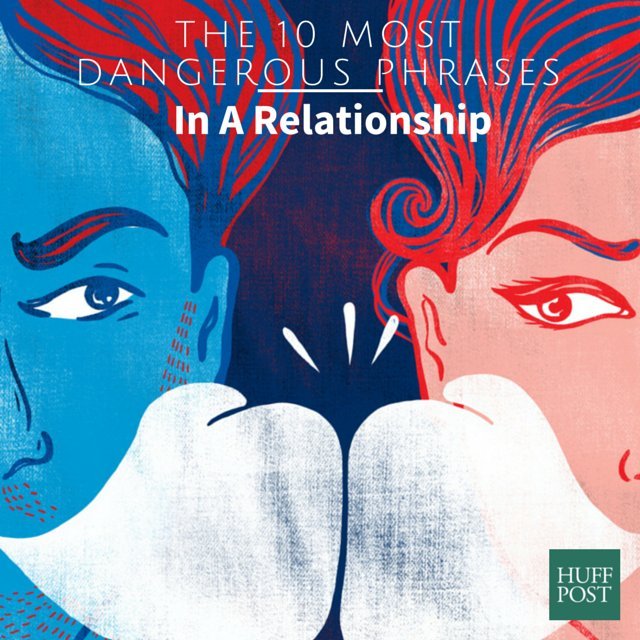 You're on your best behavior when you first start dating someone: polite to a fault, quick to suggest sharing dessert (later, you enter "order your own!" territory), and really, truly careful about what you say.

Then, somewhere down the line, you get comfortable. A little more loose-lipped. You say things you don't mean.

An apology generally goes a long way, but some things said in the heat of the moment may be irreversibly damaging to your relationship. Below, 10 phrases you should banish from your argument arsenal.

1. Anything that begins with “you always” or “you never.”
There's no hope of having a productive conversation once you or your S.O. makes sweeping accusations against each other, said Virginia Gilbert, licensed marriage and family therapist.

"Uttering these words will immediately put the other person on the defensive. Instead of getting what you want, the two of you will spend the rest of the evening -- or the rest of your relationship -- debating who’s right. Instead, use 'I' statements. For instance, 'I feel that I’m usually the one to say 'I love you' and it would make me feel good if you could say it first sometimes.' Keeping the focus on your needs instead of pointing out your partner’s shortcomings -- as glaring as they may be -- invites an opportunity for positive change."

2. "Why do you want to do that? You never used to like to [fill in the blank]."
Healthy, long-lasting relationships involve two people who are able to grow together. You're different people than the ones you were when you first met, so don't freak out or assume there's some ulterior motive if your partner changes his or her habits.

“You each need room to grow," said relationship author and divorce attorney Christina Pesoli. "Just as you wouldn’t be threatened by him updating his wardrobe or growing a beard, you shouldn’t be threatened when he updates his hobbies, either. Developing a new interest isn’t a threat to your relationship, but your refusal to allow him or her to do so is. If you’re with someone who never tries anything new, your relationship will eventually grow stale. So as long as he’s not talking about learning to cook meth or joining ISIS, try embracing his new hobbies."

3. "You're overreacting!"
Related, equally annoying-as-hell phrases include: "You're being too sensitive." "Don't get so defensive!" "Calm down." Let one of these sentences slip and you'll more than likely find yourself in the proverbial dog house, said William J. Doherty, Ph.D., professor of family social science at the University of Minnesota.

"Saying this is a favorite of men trying to get women to stop being upset," he said. "It's never worked in human history, but why not keep trying? The problem is that when in the midst of being upset, no one thinks their feelings are unjustified, and thus they feel unheard and put down. It would make anyone madder."

4. “Mmmhmm. Mmmhmm. Wait -- what did you say?”
Think you've mastered the art of scrolling through Instagram while pretending to listen to your S.O. talk? Think again.

"Eventually, your partner will conclude that you’re not all that interested in what he has to say -- and it’s hard to argue with that," Pesoli said. "Talking to someone who doesn’t really care about what you’re saying can be hard on the ol’ self esteem -- especially when that someone is your significant other. Being too busy to listen every once in a while is understandable. Being too busy to listen all the time is a relationship killer."

5. "I told you so."
What, you thought we'd get through this list without including this classic example?

"Say 'I told you so' one too many times and pretty soon, resentment sets in," dating expert Marina Sbrochi said. "No one likes to be thought of as dumb. Try empathy instead and see how your relationship grows."

6. “Not tonight (or tomorrow night, or any night), honey."
You and your partner aren't always going to be on the same page when it comes to sex. You each should absolutely feel free to say, "Not really in the mood after that brick-sized carnitas burrito." But you don't want "not tonight, not ever" to become the norm.

"Defaulting to 'not tonight' is a bad habit to form," said Pesoli. "Physical intimacy is what makes your relationship with your significant other different than any of your other relationships; otherwise, the two of you are just roommates who may or may not have kids together. If the fire goes out in the bedroom, there’s no question that your relationship will be in peril. Making a little effort to have sex with your S.O. is almost always a good idea."

7. "What's wrong with you?"
Below-the-belt personal attacks have no place in a healthy, loving relationship. Your goal should be to prop your partner up and be his or her cheerleader in hard times, not to bring them down.

"If you find yourself saying something like 'Are you that stupid?' 'What kind of a parent does that?' or 'You're just like your mother,' you need to cease and desist," said marriage therapist Becky Whetstone.

8. "I don't believe you."
There are bound to be times when you suspect your partner is bending the truth a bit -- or a lot. It's how you relay your skepticism that will move you closer to discovering the whole story.

"Maybe you really do suspect he or she has feelings for someone else, for instance, but there's a better way to go about it than accusing your partner of lying," said Doherty. "Saying 'I don't believe you' is inflammatory and almost always backfires. A better version is this: 'I'm having trouble believing you are telling me the whole story.'"

9. "I want a divorce."
When you threaten to breakup or divorce, you're pulling out the big guns . You may have deep regrets about saying it later, but the damage is done. As idle as the threat may be, the message to your partner is loud and clear: you already have one foot out the door. And who wants to be in a relationship like that?

"Simply put, it's emotional blackmail," said Whetstone. "If what you say has a tone of 'if you don't do this, you'll pay or I'll leave,' it's eventually going to take a toll on your partner."

10. “If you really loved me, you'd..."
Nope. Stop right there. Your partner shouldn't ever feel pressured to do something he or she doesn't want to do to prove his or her love for you.

"There’s nothing like guilt combined with a stealthy ultimatum to drain the love right out of a relationship," said Gilbert. "Instead of trying to manipulate your partner, be transparent about what you want: 'I miss spending time with you and I’d like to have a regular date night' is a direct, non-confrontational approach that’s far more likely to get you the love you want than holding your partner hostage emotionally."