Lots of companies offer pre-fab, calorie-counted meals delivered to your doorstep. Imagine that concept, made amazing: an affordable week's worth of meals, prepared by one of Chicago's best catering chefs and delivered to your front door.

Sazon was founded with the intention of bringing fine dining quality to the catering world. And now, Adduci--who has cooked for President Obama--wants to share dishes like Pork Tenderloin with Rosemary-Thyme Crust and Beef Churrasco with Chimichurri to the general public.

Here's how it works: for $98 a week, you'll receive ten meals (five lunches, five dinners), at 2000 calories a day. For $80 per week, you can get the trimmed down version, with 1200 calories each day. The lighter portion "usually means smaller protein portions, less dressing or sauce, etc.," Adduci told HuffPost Chicago.

You get to pick your meals from the menu below. If you want to have them delivered to your door, the meals will come twice a week, at an additional cost of $10 per delivery.

The only caveat is you have to sign up for at least two weeks at a time--Adduci said her operation is small enough that she can't afford to have clients coming and going every week.

Still, even with delivery charges, the more indulgent option only adds up to $120 a week, or $12 a meal. For a week of decadent plates of coriander-roasted salmon, with the added bonus of portion control, landing on your doorstep, that isn't so bad. Seriously, look at this salmon and don't drool. We dare you. 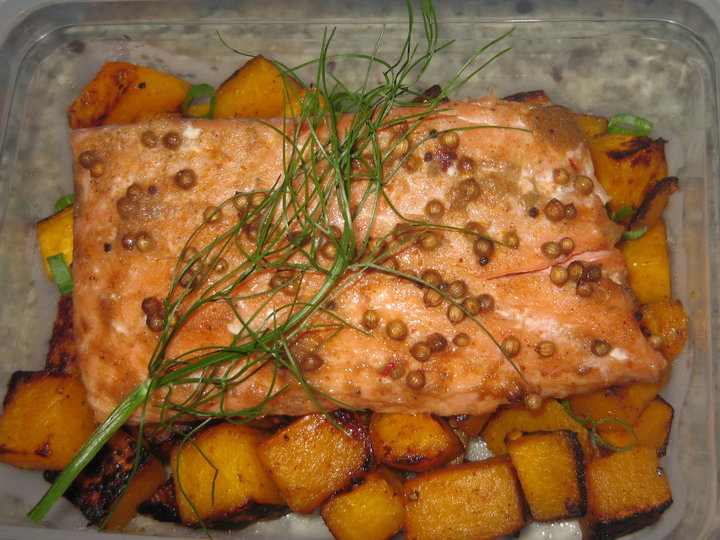 The deal was posted on Chicago Foodies last Friday, so there probably aren't many spots left on this list. If you're interested, email Adduci at ursula@sazonchicago.com.