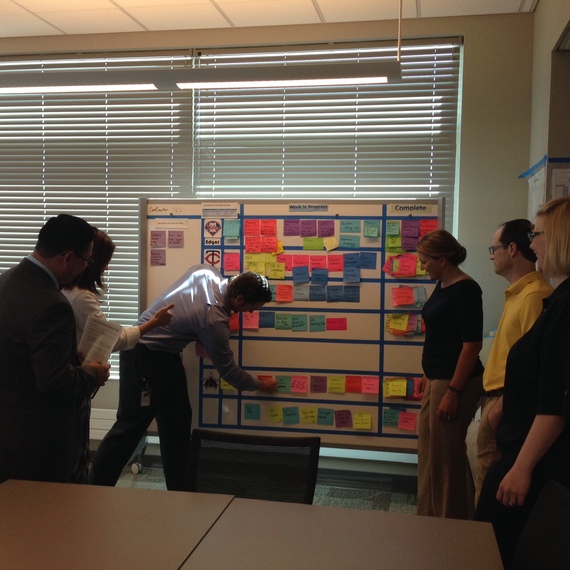 If you heard there was this great company to work for where the leaders practiced an innovative management model that promoted fun at work, made sure that everyone's voice matters, encouraged teams to initiate innovation, and resulted in thousands of applications being received for every job opening, you might think we were talking about Google. You would probably be surprised to learn that we are actually describing one of the oldest legacy companies in America, Blue Cross Blue Shield of Nebraska.

Founded in 1939, the midwestern health insurer has a long history of traditional management. However, over the past decade, under the leadership of its current CEO, Steve Martin, Blue Cross Blue Shield of Nebraska has quietly become one of the few legacy companies that has successfully transitioned the fundamental dynamics of its management operating system from a top-down hierarchy to a peer-to-peer network. The Blue insurer accomplished this cultural transformation by taking the bold step of scaling the Agile practices of its IT division to the entire organization.

Agile is an innovative management methodology that was the inspiration of 17 software developers who had gathered at Snowbird, Utah in early 2001 to uncover better ways to do their work and overcome the intrusive and unproductive constraints of traditional management practices. The result of their efforts was the crafting of the one-page Agile Manifesto and the birth of a management movement that, according to the business author Steve Denning, is "the best-kept management secret on the planet."

Agile management methodologies call for doing work in in self-organized, cross-functional teams. These teams generally work in iterative three-week phases, which are called "sprints," with clear deliverables at the end of each phase. The interim deliverables are assessed in facilitated collaboration sessions and any needed changes are incorporated into the next sprint. Since it inception in 2001, this management movement has produced extraordinary results in the IT units of hundreds of companies around the globe under the labels Scrum, Agile, and Kanban.

Scaling Agile Beyond IT

Blue Cross Blue Shield of Nebraska's IT area embraced Agile as its basic software development discipline in 2008 when Susan Courtney, the insurer's CIO, brought it into the organization. The dramatic improvement in the ability to deliver complex IT projects consistently on time and significantly under budget caught the attention of Martin, who wondered what might happen if this new Agile methodology was scaled into the regular business units. Inspired by the opportunity to make a leap to extraordinary performance, the health insurer's leadership team began an effort to train their managers and staff in Agile tools and practices.

One of the first things the staff learned is that the essential building block of work is not the individual, but the team. This doesn't alleviate individual responsibility, but rather shifts the focus of responsibility from the performance of individual tasks to the performance of team contributions. Cameron Ludwig, the Vice President of Analytics and Data Strategy, explains this shift is important because, "Delivering customer value only happens when the whole team performs." Accordingly, people are accountable to all members on their teams, and everyone is expected to keep their commitments and to help other team members when needed.

From Pyramids to Triangles

The scaling of Agile across Blue Cross Blue Shield of Nebraska has shifted the paradigm on how leadership works. This paradigm shift is reflected in a common visual you will notice in the various meeting spaces where teams gather: the triangle. At first, the visual could be mistaken for the usual pyramid that is often used to depict the dynamics of top-down management. But a closer look at the organization's triangle reveals that is a symbol for a network of relationships among the three corners of the figure, with a co-equal leader designated for each corner:

The triangle is the fundamental fractal that serves as the key dynamic for how Blue Cross Blue Shield of Nebraska works. It is reminiscent of the tripartite leadership approach that has fueled the success of two of the world's most successful businesses: Google, with its team of Larry Page, Sergey Brin, and Eric Schmidt, and Intel, with its team of Gordon Moore, Robert Noyce, and Andy Grove. Blue Cross Blue Shield of Nebraska has found a way to scale this tripartite leadership model throughout its entire organization.

The Importance of Visualization

In addition to triangles, there are many other visuals displayed on the walls of Blue Cross Blue Shield of Nebraska. Walk around the building and you will see teams working in open work spaces with walls covered in Post-It notes arrayed in pictures that convey the stories behind their projects. Visualization is a core management concept at the health insurance company. "Visualization is powerful," explains Courtney, "because it clearly conveys how everyone's work is interconnected, fosters collaboration, and gives people the tools to effectively self-organize their work." This concept delivered in a very big way a few years back when the insurer's computer network went down for five hours while the leaders of the IT organization were attending an off-site meeting. Without waiting for direction, the various on-site teams self-organized their efforts and effectively resolved the computer outage.

In his recent book, How Google Works, Eric Schmidt explains the secret behind Google's success is a commitment shared among the leaders to hire great people and get out of their way. The scaling of Agile is Blue Cross Blue Shield of Nebraska's way of applying Google's wisdom. As Jennifer Richardson, the Senior Vice President of Operations, points out, "We concentrate on providing our teams the vision, or the "what" we need and leave the "how" to the teams. Then it's our job to build a container in which people are free to do their best work."

Rod Collins (@collinsrod) is the Director of Innovation at Optimity Advisors and the author of Wiki Management: A Revolutionary New Model for a Rapidly Changing and Collaborative World (AMACOM Books, 2014)