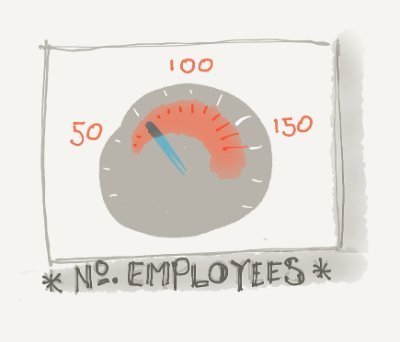 Somewhere between 50 and 150, whether by talent acquisition or company acquisition, if strong relationships aren't fostered, culture is more than likely to go off the rails.

The second part in a series exploring the why, when, and how of managing company culture in a growth organization.

If you've ever had to work with another human, you know good relationships make for good work. These bonds are the conduits of culture, and while they don't guarantee success, you can be sure it ain't happening without them. Think of relationships as connective tissue: take this essential layer away and business would just be a pile of old laptops and financial documents.

No blue chip CEO will argue the point: the human side of business is critical to success. But how does this system of relationships change as startups emerge from their proverbial garages with dreams of long-term success? In post one, I proposed an answer: relationship decay. As co-workers increase in number our brains have to work harder to remember all the names, faces, and details. We are forced to choose who we know and how well.

When our brains have to work harder to remember all the names, faces, and details, we are forced to choose who we know and how well.

Why should anyone care about relationship decay? It is the reason startup cultures fail.

Without foresight and guidance, startup cultures weaken with growth. It's hardly noticeable at first, but when it gains momentum employees will look up and no longer know all of the who's and what's that make the organization work. This is it: the moment culture is at greatest risk of unraveling. If we can see it coming maybe we can prepare for it.

It turns out for primates, social grooming is mainly achieved through, ta-dah, actual grooming. But I'm interrupting:

Maintaining stability of human-sized groups by grooming alone would make intolerable time demands. [...] the evolution of large groups in the human lineage depended on developing a more efficient method for time-sharing the processes of social bonding.

In human conversations about 60% of time is spent gossiping about relationships and personal experiences. Language may accordingly have evolved to allow individuals to learn about the behavioral characteristics of other group members more rapidly than was feasible by direct observation alone.

Fascinating. But no matter how chatty we may be, even homo sapiens have an upper limit when it comes to group size. Dunbar concludes that groups can only grow so large--eventually what it takes to maintain the relationships outweighs the benefit of being together. When the number of individuals grows beyond 150, now known as Dunbar's Number, the group will divide or create subgroups. (Even author Malcolm Gladwell name checked this phenomenon in his book The Tipping Point.)

Neighborhoods within towns, teams within leagues, and even clans within online communities are all examples of organized groups that more or less adhere to Dunbar's theory. So that's our moment of risk, yes? I wasn't so sure. I had seen organizational culture go through significant change well before that. So I did some more digging. It turns out, when it comes to work, the wheels on the culture wagon may get wobbly way before Dunbar might expect.

Internet Cryptography Pioneer Christopher Allen has tussled with Dunbar's number in a few well-written articles. In them he argues that groups subdivide at significantly less than 150; probably around 50 he argues. Why? For groups that come together for reasons less than true survival, the amount of energy required to maintain relationships above fifty individuals is greater than the benefit received. While corporate America's competitive environments can evoke "kill or be killed" attitudes, we aren't fighting off large toothy predators like our hairier ancestors, even if sometimes it feels like it.

While corporate America's competitive environments can evoke "kill or be killed" attitudes, we aren't fighting off large toothy predators like our hairier ancestors, even if sometimes it feels like it.

Add the layers of management, departments, and new locations that happen around this time and, boom, culture spaghetti all over the floor.

Does Allen prove an exact number for this phenomenon? No. But it doesn't matter. When it comes to an organization subdividing and relationships weakening (or not happening in the first place), the story is the same nearly every time. Somewhere between 50 and 150, whether by talent acquisition or company acquisition, if strong relationships aren't fostered, culture is more than likely to go off the rails. And if leaders aren't looking, when they are finally forced to tangle with the symptoms of an unraveling culture it will be too late.

Maybe not too late, but the sooner founders and leaders realize that culture can and should be designed, the sooner they can begin thinking about how to strengthen relationships even as their organization grows beyond 50, 500, or 5000.

Josh Levine is a speaker, consultant, and educator of all things culture. His writing has been featured in publications including Fast Company, The Design Management Journal, and 99u Magazine. You can follow him around the web @akajoshlevine.