Drunk people with long hair and escalators are a bad mix.

Dr. Ruthie Crider, an emergency room physician in Savannah, Georgia, saw the potential dangers first hand when an intoxicated male came to the E.R. with his hair barely attached to his head.

"As we were trying to get the [cervical collar] on him [to protect his spine], the patient leans over and vomits. Literally, I am staring at his skull," she said on an episode of Untold Stories Of The E.R. airing Friday on Discovery Fit and Health.

The patient showed up in the ambulance bay of the hospital and was so drunk that he either couldn't or wouldn't tell the E.R. docs how he was scalped.

"When you have an open wound, you need to know what caused the injury," Crider said.

The man's injuries took place at a time when the circus was in town, leading Crider to speculate he was attacked by circus animals.

When she tried to find out if lions, tigers or bears were involved, the patient was unresponsive.

"He's not being helpful at all, not letting us know what lacerated his skin in this horrific way," Crider said.

Instead, she said he kept asking for another drink.

Crider finally put two and two together when a police officer showed up at the E.R. looking for a 40-year-old male who had reportedly been injured at a local mall on an elevator -- not an escalator.

"[I was] considering how this patient got injured in an elevator and I thought, 'Does that even make sense?'" she said.

Crider suddenly remembered one of her biggest childhood fears was getting her hair stuck in the escalator and figured that was what happened to the mystery patient.

Discovery Fit & Health is keeping the lid on the escalator scalping until the episode airs, but considering that the actor playing the victim seems to play the part for laughs, it's a good bet he survived. 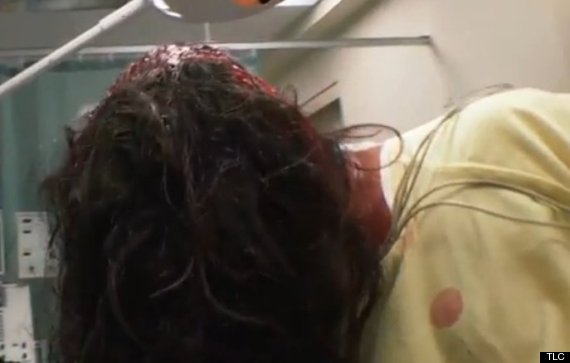