The Federal Election Commission is raising questions about reports filed by the biggest super PAC associated with Scott B. Mackenzie, who's listed as the treasurer of more than two dozen PACs. As OpenSecrets Blog has reported previously, much of the money raised by Mackenzie's PACs goes to vendors with ties to him. 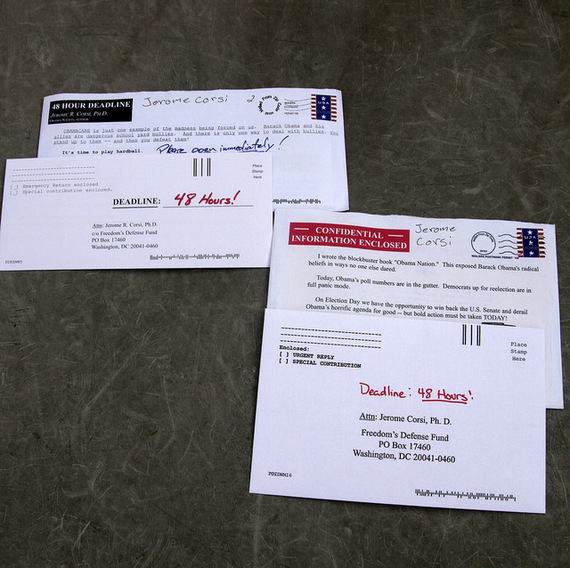 The FEC's letters, two dated May 18 and one dated May 10, focus on apparent independent expenditures made by the group, Freedom's Defense Fund, and debts owed by the PAC to a company with ties to Mackenzie called Forth Right Strategies.

The FEC noted that Freedom's Defense Fund failed to properly disclose nearly $300,000 in independent expenditures against Hillary Clinton in the first quarter of 2016.

While the group does spend some money promoting or attacking candidates, as is the norm for super PACs, most of its money goes toward raising still more money and, ultimately, winds up padding the revenues of Mackenzie's companies. And the fundraising mailers sent by Freedom's Defense Fund convey a breathless sense of urgency. One sent last year, for instance, gave recipients a "48 hour deadline" to respond and implored them to stand up to "dangerous school yard bullies" like Barack Obama.

An analysis of campaign finance records and business paperwork last year showed that 65 percent of all of Freedom Defense Fund's income went to firms tied to Mackenzie. Three firms, all based at the same address, received $613,405 between March and June 2015.

Now, Freedom's Defense Fund has raised nearly $1.9 million so far this cycle and spent $1.8 million of it. The lion's share -- $965,000 -- is categorized as fundraising expenses. Forth Right Strategies, one of the companies at the address linked to Mackenzie and the one that has caught the FEC's attention, received $41,253, and Mackenzie's main company received $34,000.

What's more, most of the fundraising expenses -- $694,610 -- have gone to DSSI, a company that also serves VIGOP, another Mackenzie PAC with similar spending patterns and notoriety. In all, there were about 30 PACs under Mackenzie's guidance as treasurer at last count.

With letters also sent to Conservative Strikeforce, perhaps the most notorious Mackenzie PAC, last month, the FEC appears to be questioning whether something's amiss with his groups. It's unlikely the FEC's inquiries will make much of a difference, however. The inquiries aren't audits. And as a whole, the commission lacks not only the will to act on "scam PACs," but also the authority: Last year, FEC Commissioner Ann Ravel put it on the Department of Justice to take on "fraud in the electoral arena." Ravel and the other Democratic commissioners wanted to ask Congress to enable them to do more, but good luck with that.

Rather, scam PAC activity is likely to continue apace. The cottage industry has already begun to take advantage of the rise of Donald Trump, creating confusion about which outside spending groups will actually, and effectively, promote his candidacy.

For Mackenzie, maybe that trend is already old hat. After all, he started Patriots for Trump in September 2015, paid himself a few thousand dollars, and terminated the committee in January.