Fear can be a powerful motivator. For Walter de Brouwer, it was the fear of not knowing his son’s vital signs when he was hospitalized that led him to create a device that may revolutionize the world of health care.

His company, Scanadu, is set to release a mobile device that provides medical analytics on consumers' smartphones using a special sensor called the Scout. De Brouwer says the idea sprang from the frustration he felt at not knowing his son's health status after he suffered a major fall. Nearly a decade later, de Brouwer's device will provide users with their heart rate, respiratory rate, blood pressure and more, in just a few seconds.

“I wanted to make a tool that you can understand the diagnostic experience of an emergency room in the palm of your hand,” says de Brouwer, who told TIME that the device will be the ”the ultimate consumer device for medicine.”

At the heart of Scanadu’s mission is the desire to lift the veil from the sometimes secretive and obscure world of medicine.

“We are becoming a number in the supply chain and we are helpless,” de Brouwer says. “The more you measure yourself, the more you have this complete body of knowledge and it will eliminate that feeling of powerlessness."

Six-thousand people spread throughout at least 90 countries contributed around $1.6 million to Scanadu via the crowdfunding site Indiegogo -- a campaign that stands as one of the site’s most successful, according to ABC News. Its initial funding goal was a modest $100,000.

But de Brouwer’s road hasn’t been a short one and throughout his long career he’s spent time developing a number of projects and entrepreneurial enterprises from a cyberpunk magazine to Starlabs, a now defunct program that supported the projects inventors were most passionate about, according to The Independent.

Scanadu, however, appears to have a long future ahead with plans to support diagnostics related to female pregnancy, as well as the common flu.

“If you give the people that device they will rewrite medicine,” de Brouwer said.

PHOTO GALLERY
How I Did It: Scanadu

Walter de Brouwer, Scanadu Founder, Hopes Smartphone Device Will 'Rewrite Medicine'
How I Did It: Scanadu 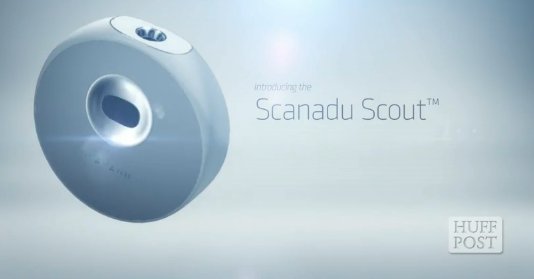