What began as whispers among the media and gymnastics insiders weeks ago about the ages of three of China's female Olympic gymnasts -- Jiang Yuyuan, Yang Yilin and He Kexin -- has grown into ear-shattering, head-hurting shouts. Despite assurances by Chinese officials that all three are 16, the minimum age of eligibility for Olympic competition, newly discovered documents and records prove otherwise.

The New York Times first looked into the age of China's gymnasts with a story on July 27 that focused primarily on He Kexin, whose birthdate on numerous online records was listed as January 1, 1994, making her 14 when the Games began and ineligible to compete.

When the world was officially introduced to He Kexin this week, even those unwise to the ways of competitive gymnastics could tell that with He, something was not right. At 4-foot 8-inches tall and weighing 72 pounds, the Beijing native appears significantly younger than most of her Chinese teammates much less her American and European counterparts.

The world's foremost expert on female gymnastics Bela Karolyi has routinely referred to the 2008 Chinese team as "half people" and in his contributions to NBC as a commentator during the Games he has railed against the Chinese for engaging in age falsification. After China outscored the U.S. in the qualification round, Karolyi had this to say about the Chinese gymnastics officials:

These people think we are stupid...We are in the business of gymnastics. We know what a kid of 14 or 15 or 16 looks like. What kind of slap in the face is this? They are 12, 14 years old and they get lined up and the government backs them and the federation runs away. There is an age limit and it can't be controlled.

Chinese Olympic officials have forcefully defended He's eligibility, maintaining that when asked, they submitted proper passport documentation to the IOC. He's passport says her date of birth is January 1, 1992, making her 16 and old enough to compete. However, as Karoyli told the AP, "passports mean nothing."

China has a rich history of age falsification in Olympics competition, especially in gymnastics. At the 2000 Sydney Olympics, three years after the minimum age was raised to 16 in gymnastics, Chinese gymnast Yang Yun competed and won a bronze medal in the uneven bars (coincidentally this event is also He's specialty). Yang's passport said she was born on December 24, 1984 and turning 16 in the year of the Games, making her eligible. She later confessed in a television interview that she was only 14 at the time of the competition and that she and her coaches had lied about her age.

As in the case of Yang Yun, the existing records prior to the Olympics -- local registries, athletic records and news articles -- were all correct, whereas the documentation she showed Olympic officials to confirm her eligibility proved to be false. It is no coincidence that He Kexin's passport was issued on February 14, 2008, a mere 6 months before the Olympics.

What did the IOC have to say about the scandal? President Jacques Rogge said, "The IOC relies on the international federations, who are exclusively responsible for the eligibility of athletes. It's not the task of the IOC to check every one of the 10,000 athletes." Not every one Jacques, but maybe just the ones who look like they're ten.

So, for all of those who are still left unconvinced, I offer a collection of evidence that will demonstrate not only that the Chinese gymnast in question was born in 1994 and underage, but that Chinese officials, over the last few weeks, have systematically tried to cover it all up.

EXHIBIT A: A China Daily article dated May 23, 2008 titled "Uneven-bars queen the new star in town" about He Kexin. This is the cached version (thanks Google) of the article as seen on August 4, 2008. 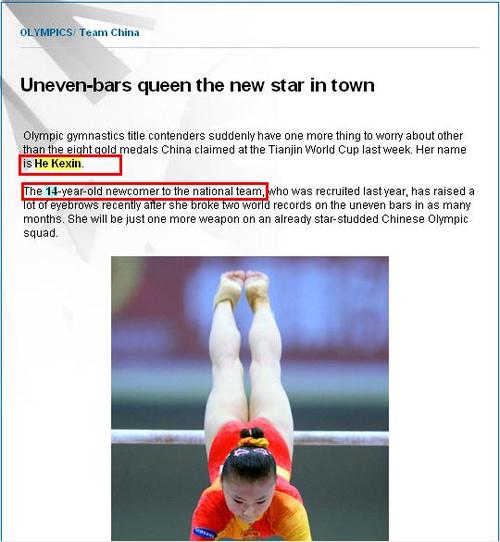 EXHIBIT B: The same China Daily article dated May 23, 2008 titled "Uneven-bars queen the new star in town" about He Kexin. This is the version currently available online*. As you can see, when compared to EXHIBIT A, everything is identical. Except for one little thing. The state-run newspaper has changed He's age. 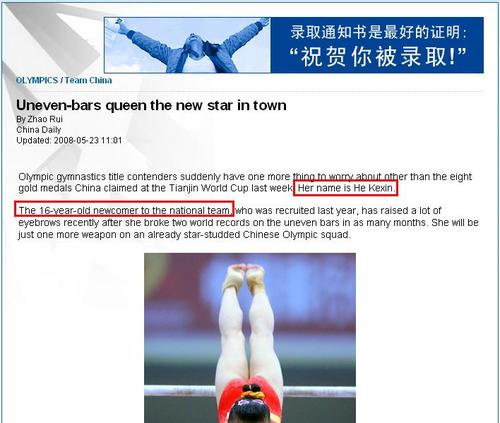 EXHIBIT C: A Chinese article written by state-run news agency Xinhua in 2007, and discovered by the great China Digital Times that refers to He Kexin as 13 years old. And though I wasn't a math major, if she was 13 in 2007, then she's 14 this year. Here is an image of the article with a translation from CDT beneath it. 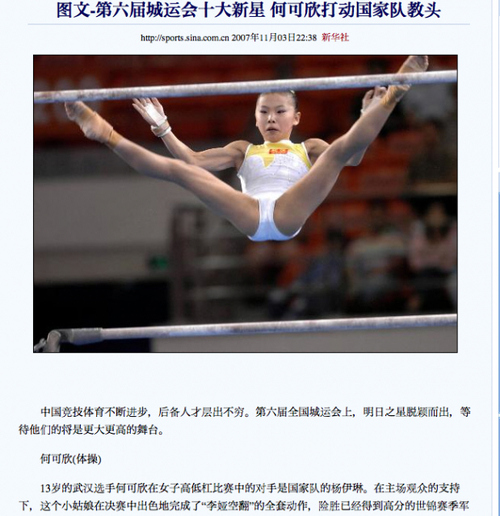 Translation: The thirteen-year-old He Kexin, from Wuhan, met opponent Yang Yilin, who is on the National Team. Amid cheers from her hometown audience, the young girl excellently executed the full set of moves in the finals, and just beat out Yang Yilin, who already had high scores. Lu Shanzhen, the General Coach of the National Gymastic team, also applauded her performance.

EXHIBIT D: An official gymnastics roster dated January 27, 2006 published by the Chengdu government for its City Games, a competition in which He competed. As you'll see from the translated version I have provided, He Kexin's date of birth, according to these government documents, is January 1, 1994. 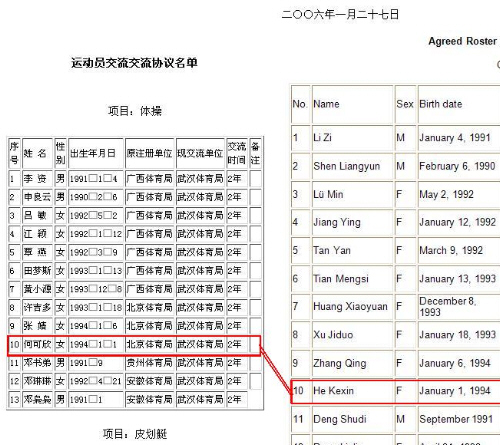 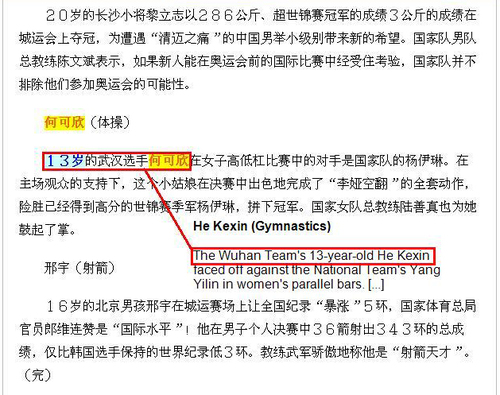 UPDATE II -- MORE: The Gateway Pundit has more on the underage gymnast scandal and includes some interesting information on He's teammate Yang Yilin.

*UPDATE III -- BROKEN LINKS: As I had suspected would happen, the links that I provided in EXHIBITS B, D and E, all links to Chinese state newspapers or websites, have been disabled. At the time of publication on August 14th, the links to all sources worked. I found a cached version of the link to EXHIBIT D, which is now in the post above. The original link I used, now disabled, is here.

Here's a photo of He from Sunday's women's qualification round in Beijing: 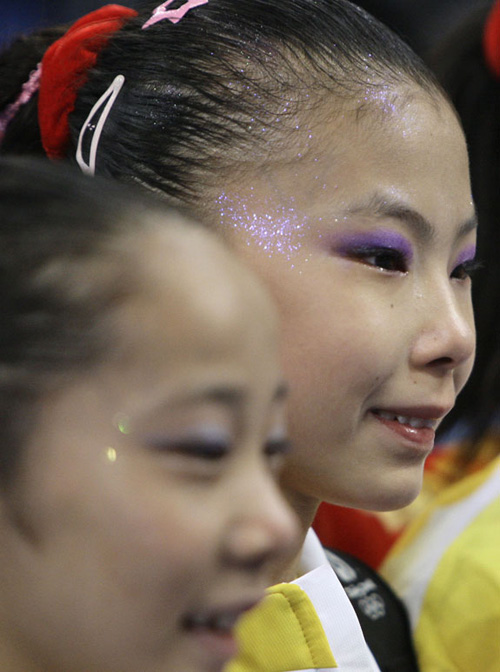