Like many of you, I feel frustrated, embarrassed, and exhausted by the political theater of our current Presidential campaigns. My natural inclination is to retreat, as often as possible, to my comfort zone -- to museums and galleries, where I can hide away with the art blanket over my head. Yes, nice try... 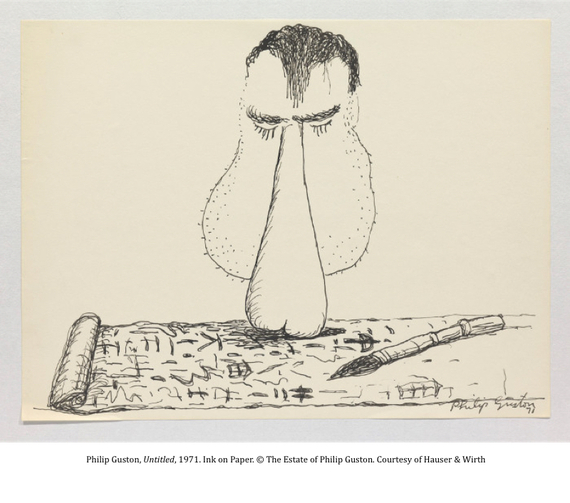 Picking up the New York Times on Monday, I chose not to start with the front page, but instead went for safety to the Arts section, only to be greeted by the devastatingly funny 1970s caricatures of Richard Nixon by the great Philip Guston. Just take a look. Artistically and politically, his commentaries are as relevant today as they were almost half a century ago. One wonders what Guston would make of today's politics. 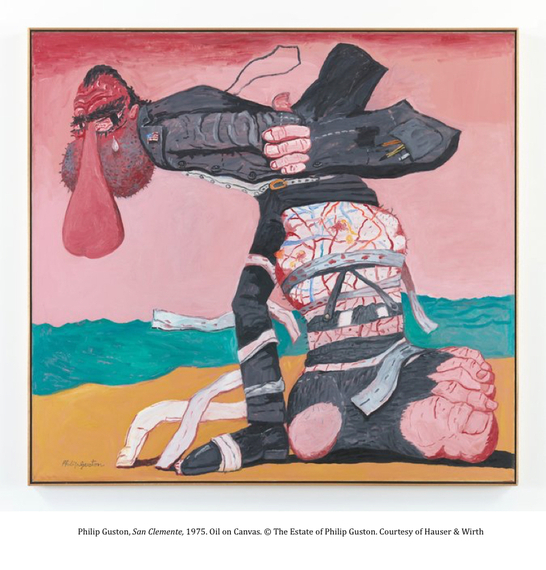 So much of the great art that we admire today has been inspired by the tragedies of the past. Think about the devastation of the Spanish Civil War, without which Picasso's Guernica wouldn't exist. And Leo Tolstoy wouldn't have written War and Peace if not for Napoleon's invasion of Russia in 1812. 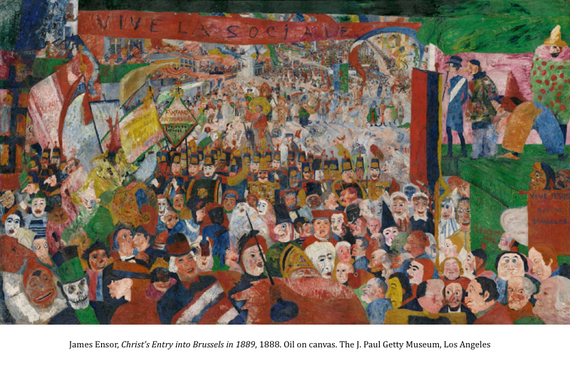 One of my favorite paintings on permanent display at the Getty Museum is the monumental composition Christ's Entry into Brussels in 1889 by James Ensor (1860-1949). Standing in front of this painting created more than 100 years ago, one still hears the noise of the massive crowd and feels shocked by its grotesque figures and faces -- many of them wearing frightening carnival masks. Hidden deep in the crowd is a small figure of Christ, resembling Ensor himself. Is Christ the subject of celebration, or of mockery? It's up to us to decide. Ensor is obviously referring to the deep cultural, religious, and ethnic issues dividing his country. 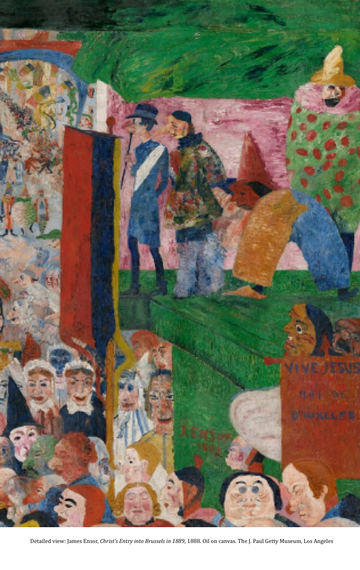 Due to bitter cultural divisions between French and Flemish speakers in Belgium, the country failed to acquire this major masterpiece, which allowed the Getty Museum in 1987 to make the courageous, even ballsy, decision to add this "scandalous" image to its collection of Old Master paintings. Belgian newspapers jokingly referred to this event as "the Entry of Christ into Malibu". 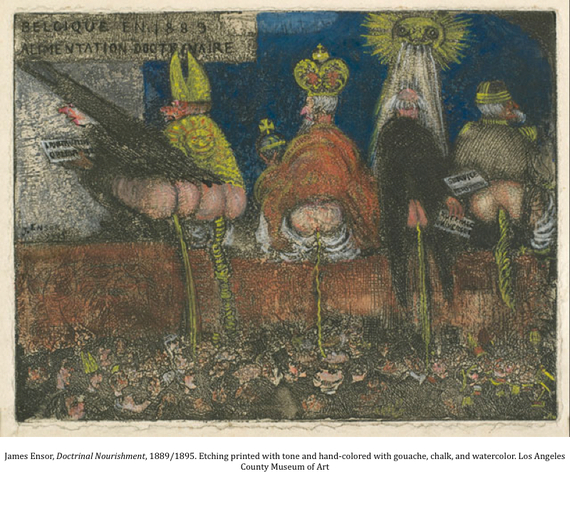 A couple of years ago, the Getty held the exhibition "the Scandalous Art of James Ensor". You want a shock? Here you have it. There was a small, hand-colored etching Doctrinal Nourishment (1889), depicting royal and religious figures of authority with their pants down, squatting and... yes... defecating over the large crowd beneath them. Here's a thought. To grow beautiful roses in your garden -- to enjoy their sweet aroma --- what do you have to put in the soil: honey or horse manure? 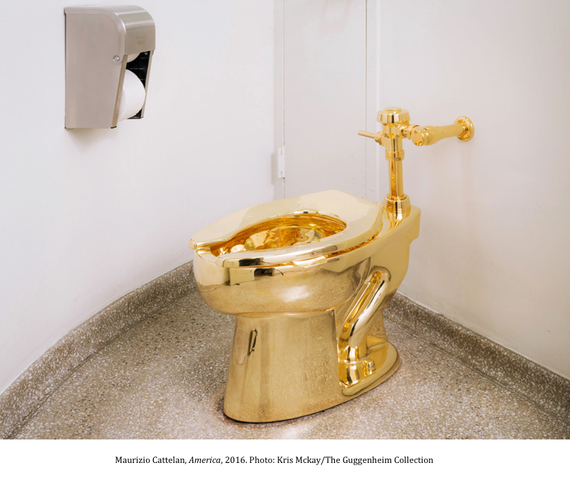 Now that I see you pinching your noses, let me invite you to visit the Guggenheim Museum in New York and to have the unique opportunity to satisfy nature's call by going to the museum's humble fifth-floor restroom -- where famous Italian artist Maurizio Cattelan installed "a fully functional, solid 18-karat-gold copy of a Kohler toilet". (That's how it was described in a New York Times article last month.) The article says that "[the artist] hopes people do not see the toilet sculpture as a joke ... Its title, 'America', is so loaded it seems to weigh more than the toilet itself".