Scarlett Johansson had a busy 2013. The 29-year-old actress starred in Joseph Gordon-Levitt's feature-length writing and directorial debut, "Don Jon," appeared on Broadway in "Cat on a Hot Tin Roof" and filmed "Captain America: The Winter Soldier," all while also finding the time to take on a "little" voiceover project in the now critically-acclaimed Spike Jonze film, "Her."

Not to mention Johansson was just named the first-ever Global Brand Ambassador for SodaStream International Ltd. and will be kicking off the partnership by starring in a Super Bowl XLVIII commercial on Feb. 2.

The Huffington Post sat down with Johansson at the Gramercy Park Hotel in New York City on Jan. 10 to discuss her unfortunate disqualification from the Golden Globe Awards, her experience working with Jonze and Joaquin Phoenix on "Her" and what it's like playing a supporting role in someone else's Marvel movie. (Her hotel room was "freezing," so she wrapped herself up in a blanket and got comfy on the couch with some candy).

There has been a lot of buzz surrounding your performance in "Her." What do you think about being deemed ineligible for a Golden Globe nomination?

I didn't expect to be recognized for the Golden Globes because I think they always have said that it was not a type of performance that they would recognize. Of course, I never expect to be nominated for anything [laughs]. I worked in the post-production part of it -- I mean, I worked on it for months, but it was in a totally different way. Working with Joaquin and working with Spike in this really intimate way -- kind of isolated, the three of us -- really allowed me to focus on how to develop this character and what needed to be in the relationship that wasn't there, and how could this character become kind of independent of Theodore [Phoenix's character] and independent of her own programming. I needed to create something that was tangible out of an idea that feels really abstract.

And that kind of work that I did with Spike felt like we were making our own separate film that any recognition or all that stuff, for me, is really, totally unexpected and surprising. I'm excited for Spike because its a project that, when he came to me, he had been working on for a long time. He had come to a point where he really needed a partner in this relationship, and so, for me, just to see the film be recognized and people responding to the relationship and to see that it's working, I'm like, "Yes! We did it."

Samantha Morton originally voiced the part of Samantha during the production of "Her" Did you reach out to her before taking on the role in post-production?

Firstly, I absolutely adore Samantha Morton's work, I don't know her personally, but she's a wonderful actor. And it was not about that the quality of her performance was off. What I really talked to Spike about was how he wanted the character to evolve in the script as he had written it. I didn't really talk about how it would be a different performance from hers because we're different actors and certainly we have different qualities. But, I know that he spoke to her about it and they worked extensively on it and, certainly, whatever performance Joaquin gives is as much a reaction to Samantha's performance and the work that I did after in post. I guess it's a collaborative performance in that way.

Was it daunting to do a voiceover rather than work with Joaquin face-to-face during scenes?

Joaquin was there when I recorded, so I did get to work opposite him. It was wonderful, he was so dedicated. He basically did the movie twice. You know, working with Spike, we actually did the movie like 400 times because I feel like we recorded the film in its entirety that many times [laughs]. It's funny because when my agent presented me with the project, before Spike and I had even spoken, I was doing "Cat on a Hot Tin Roof" in New York and I was about to go on to "Captain America: The Winter Soldier" and I was doing a bunch of other stuff and he was like, "Oh, you know, it's like a few days, it's like a vocal thing." And I was like, "Okay, let me try it out." And I looked at the script, and I was like, "It seems extensive."

So I met with Spike and he's like, "Oh, it's just a re-recorded thing." And at our first meeting, before we even agreed to work together, it was almost like testing out cars. Like, how does this fit with me? Can I be responsive? And Spike and I spent nine hours in his apartment and at the end of it he fed me, like, stale hummus or something, I was like, "I'm starving! You're not paying me for this session, I'm hungry. I'm broke now. You took up all my time. I have a play to do tomorrow ... twice." But he and I both kind of looked at each other and were like are we really going to do this together because I was like, "This is a lot of work Spike." And he was like, "I know." I was like, "You knew this, and you didn't tell me!"

It is difficult because you are so focused on the nuance, on the intonation, it's like you're hyper-aware, but it's liberating. And I loved working on it and I was excited to take on the challenge, even though I didn't have any time [laughs]. But I was like, "Wow, this is going to be really hard and I've never done anything like this before, so let's do it." And just the fact that I didn't know how I was going to do it or if it was going to work was exciting. Of course, if that relationship doesn't work in this movie, then it's like, what is there? So that's the most exciting part about people responding to it, because it's like, yeah, it came across in the work that we did, so that's cool.

What was more difficult, filming the nude scenes in "Under the Skin" or the sex scene in "Her"?

Both were difficult because you're naked in many ways, even when you're not literally naked. "Her" was intense -- I know Joaquin had a hard time with it too. It's like very intense, you know, because you can't kind of hide behind the beautiful lights. It's so stark, you know, who wants to hear themselves talk? I was like, "Please, at the end of this take, do not play any of that back." I don't even like to hear myself on a voicemail, you know? So it was very intimate, but it was cool, it works. You have to let go of your inhibition and just do it.

And the same goes in "Under the Skin." You start to go, "Oh, I'm really self-conscious about these things. Why? What is it about my body or what am I worried that people are going to see or what am I seeing? What do I think about myself this way?" And then you go, "Okay, I have to, like, liberate." Especially in that film because the character has no judgement of her own body, she's not in her own skin. She's not a self, she's becoming a self, but it's this huge transition that she's making toward self-discovery and why this is what my body is like. She's not going, "Oh, I'm looking fine in this light or I'm looking lumpy," you know what I mean? She's not thinking any of that, so I was like, "Okay, I have to get rid of that." And that's the challenge in both cases, is that, these characters are very different, but, in some ways the similarities are that they're completely liberated of their own like self-awareness. Of course, Samantha has doubts but those doubts fade as her confidence builds and she never goes back to that place.

"Avengers" had a true ensemble cast. Now you're in someone else's movie again. How does "Captain America" differ from "Iron Man 2"?

My first Marvel film was "Iron Man 2" and then we did "The Avengers" and then Chris Evans and I did "Cap 2," but I think that film, there's a couple of new characters. The Falcon [played by Anthony Mackie] is a new character in that, and of course Sebastian Stan is kind of continuing his character, obviously he's playing the Winter Soldier. But these characters really kind of take on something bigger than they've ever seen, so I think it's something that they can't do without each other. In that sense, we were in it, kind of neck-and-neck, and it's a bigger responsibility. But then again, even in "Avengers 2," we all play in it, it's not like, "Great, I'll be booking, like, two days a week and then be eating sandwiches the rest of the week." No, it's on. We all are fighting in it together, we're all fighting our own battles and our own demons and it's a lot of dramatic work, and the physical part of it, so the films all have their own challenges, but it's fun.

And hey, there's a lot of good looking guys to be surrounded by ...

I know! It's exhausting! You know what I mean? They spend more time getting ready in the trailer than I do.

"Her" is playing in theaters now. "Under the Skin and "Captain America: The Winter Soldier" are both set to be released in April 2014. 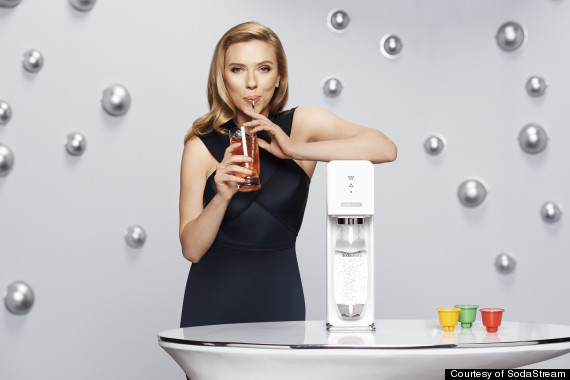 Scarlett Johansson is thrilled to be teaming up with SodaStream. She tells The Huffington Post, "It's a product I've used for six or seven years and pushed on all my family and friends. It's a good fit, we share a lot of the same core values. Partly why I use the product is the message that they're selling, which is the belief in reducing your own carbon footprint and still being able to enjoy the product in the same way you would any other soda. They're not using high fructose corn syrup, they're not using Aspartame, it's incredible the impact they could make if everybody is enjoying this at home and not buying cans and plastic bottles."