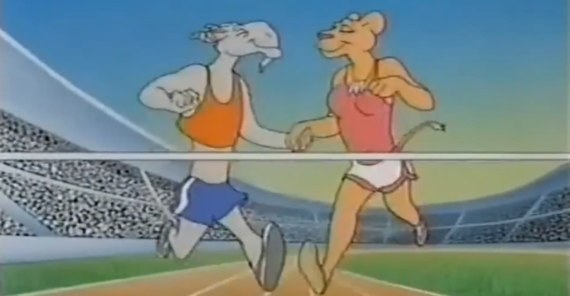 I wasn't really allowed to watch scary movies growing up. Not that the rule was so constrictive: Being an only child who often found himself alone in a moderately sized suburban house -- big enough that there were plenty of places for a criminal or supernatural beast to hide -- the last thing I ever wanted to watch was a scary movie. I was plenty scared enough just on my own. In the summer of 1984, however, I accidentally discovered a 78-minute cartoon that scared the living hell out of me. It was called Animalympics.

Before we get to that, yes, there were at least a few traditional horror movies that I managed to watch. Poltergeist seems to be a go-to answer for a lot of people my age because Poltergeist was mass-culture horror.

Even if you didn't watch horror movies, you watched Poltergeist. Its promotional efforts featured a pleasant-seeming young girl (the now late Heather O'Rourke), plus Steven Spielberg's name was associated with the movie. How scary could a movie that Steven Spielberg produced actually be? Plus, not many people in 1982 really even knew what the word "poltergeist" meant. (At the time, I remember more than one local Missouri news segment devoted to explaining what a poltergeist was, and why there might be one in my house at right that moment.) My point is: Everyone has seen Poltergeist, and everyone was scared by Poltergeist.

Since my exposure to actual scary movies was limited, it's almost as if my brain looked for anything odd or eerie in mainstream culture and then deemed it scary, even though its intent was not to frighten.

(For the longest time I was deathly afraid of the PBS logo that would run after Sesame Street and The Electric Company in the early '80s. I would literally run to the television set in order to turn it off before this logo would appear and I have no rational explanation for this other than the face on the P still kind of freaks me out, not to mention that the music that plays as the logo forms is really ominous.

So ominous. Let's watch Morgan Freeman in the opening credits of The Electric Company in an effort to cleanse ourselves from the pure evil.

So, when I think back to the movie that frightened me as a child more than any other movie, it really was the strange spectacle of Animalympics.

Animalympics, directed by Steven Lisberger (who would go on to direct Tron) was a 1980 animated film that was supposed to coincide with the actual 1980 Moscow Summer Olympics (the U.S. would wind up boycotting the games over the Soviet Union's involvement in Afghanistan), but, instead, eventually found some popularity when it ran on a constant loop on HBO during the summer of 1984, while the Olympic games were in Los Angeles (which, yes, the Soviets boycotted).

In 1984, animated programming was not available 24 hours a day. On Saturday mornings, the networks released a lineup of animated programming no different than how they set their primetime programming now. At least for me, it was a huge deal when the Saturday morning lineup was announced. "Oh, I don't know what Turbo Teen is, but I can't wait to watch Turbo Teen," I probably never said, yet I did watch Turbo Teen. (Yes, there was an animated series called Turbo Teen that presented us with the adventures of a teenager named Brett Matthews who developed the ability to morph into a red sports car. It somehow lasted 13 episodes.)

Anyway, my point is that every cartoon I had watched until this point in my life had been the straightforward, most likely Hanna-Barbera produced, variety. Boy, Animalympics threw me for a loop.

It's weird to watch Animalympics (not to be confused with Hanna-Barbera's not at all scary Laff-A-Lympics) today (and it is available to watch on YouTube) because there's nothing intermittently frightening about it. The film is bizarre (even with the voices of Billy Crystal and Gilda Radnor so prominent), but it's not frightening. Though, my only defense is that it really is odd for the first time to see animation being used in such an abstract way -- animation with characters that look so familiar to the Hanna-Barbera variety, only they frequently experience hallucinations that lead to fantastical and sometimes frightening imagery. (Also, at one point a character almost hangs himself.)

There's an ongoing plot point involving two marathon runners -- one a goat named René Fromage; one a lioness named Kit Mambo -- falling in love as they compete against each other. This results in Mr. Fromage imagining he's chasing a gold medal, a medal that morphs into a bosomed Kit Mambo while psychedelic imagery is displayed and strange and slightly out of place adult contemporary rock plays -- until, eventually, their running path becomes an accordion. All of this together freaked me out. This was not Turbo Teen.

I will not take up this space writing anymore about Animalympics, considering that it's just an oddity of an animated film about animals competing in organized sports that some people remember and some people don't remember. Though, a few days ago when I was asked, "What movie scared you the most as a child?" even I was surprised that Animalympics was my answer. But, we can't control what our individual brains find frightening. Maybe it's Animalympics. Maybe it's E.T.: The Extra Terrestrial. These things are sometimes impossible to rationalize to sane people. (Expect for that PBS logo: I will go to my grave damning its existence. Actually, the horror of that PBS logo will most likely be the thing that sends me to my grave.)