The New Yorker is apparently not done with covers bent on freaking us out — this week's version by Robert Risko, called "Red Death this Week," has to rank up there with their most disturbing covers the magazine has ever published. The point isn't hard to see — unless you're one of those stockbrokers — but in case you missed it, "red" is the color of financial ruin and "death" means that Wall Street as we know it is in its last bloody, gasping throes of existence. Not sure that the gouging-out-of-the-eyeballs was necessary, but hey — times are tough all over. Maybe it's a stigmata reference? That would be a nice feather in the old-fashioned Angel-of-Financial-Death cap. In any case, enjoy being freaked out below, like those people who are rushing to the theater to see movies like "Quarantine." Personally it's not my bag. I like happy covers, like Newsweek! Go rest your eyeballs here if you need some psychological help after this.

Update: Thank you to the commenter below and to a friend who pointed out that the reference had to be to Edgar Allan Poe's "The Masque of the Red Death." Here's a pic of someone dressed as the Red Death from the movie version of "Phantom of the Opera" (no tthe one with Emily Rossum). You can call me a heathen if you like, I don't care, I'll just blame it on being Canadian. 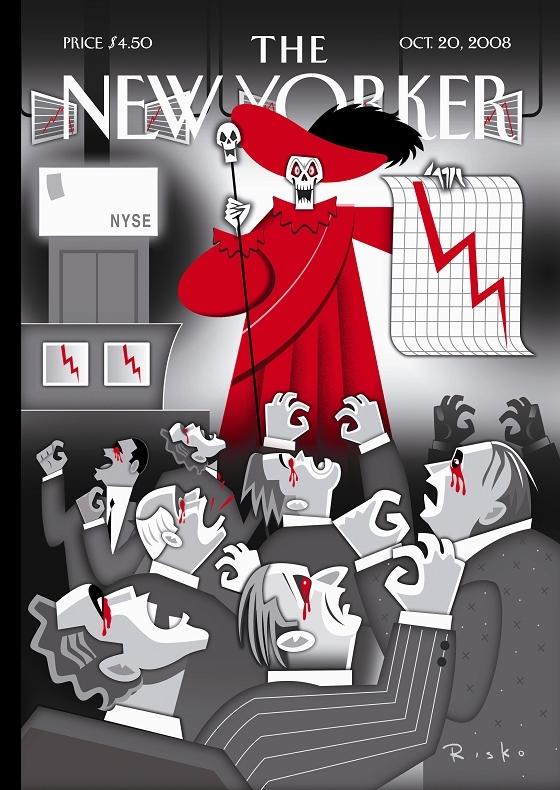