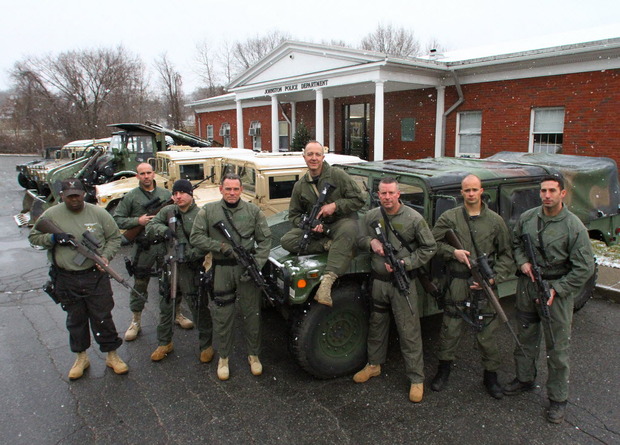 But thanks to the Pentagon, Johnston's cops are armed to the teeth.

The town of Johnston has received more than $4.1 million in military equipment over the past two years through a U.S. military surplus program that has supplied its Police Department with 30 M-16 rifles, 12 humvees, and military night-vision equipment, among others tools.

Terrific! Now all Johnston needs is for someone to take some actual hostages. But until that happens, they always use all this spiffy new equipment on people who grow pot. You know, the sort of people who according to neighbors, "never bother anybody or anything."

Via the Providence Journal, here's the full list of goodies the small police department has procured through the U.S. military:

2 Freightliner tractor-trailers and several other trucks; 30 M-16 rifles and conversion parts to transform them into M-4 weapons; 599 M-16 magazines containing about 18,000 rounds; a sniper targeting calculator; 44 bayonets for ceremonial purposes; 5 generators from M1 tanks; and 23 snow blowers. The Johnston SWAT team plans to train with its military equipment Saturday in a town park.

At least the snow blowers sound reasonable. I wonder if they come in camouflage.