Friday night I landed in Kathmandu. In baggage claim, an officer told me most of the dead are old people or women. I asked, 'Why?' Because the first earthquake was on a Saturday. Although most schools collapsed, the children weren't in them. It happened midday, so the men were out in the fields. But in Nepal, women are housewives, so they were home. And now they are dead. 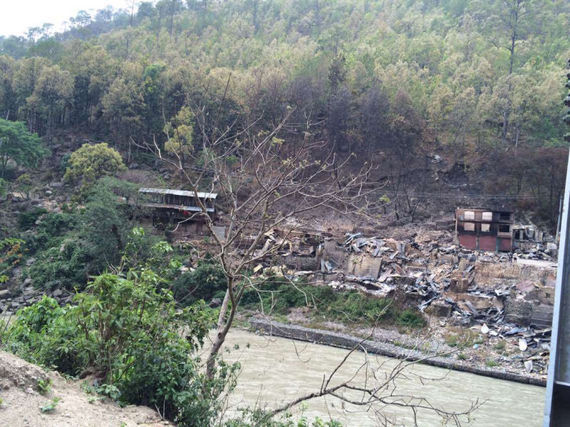 Other officers told me there are earthquakes on a daily basis. They were right. Even now, as I write, the earth is shaking and a strong wind is whipping past my window. Too many people are living in tents--flimsy tarpaulins, really. I am very worried for them. It has been like this for three days.

Saturday, there was a torrential rainstorm. That night, another earthquake. I was asleep, and I thought the roar was a huge airplane flying overhead. I was scared, but assumed it was just fear taking charge--until I realized that all the neighbors were outside shouting. That was around 1 AM. The second tremor was an hour later. And it had repercussions.

In western Nepal, it buried 25 houses under a huge landslide. In Beni a mudslide blocked the Kalingandaki River. It is a substantial river, and it swiftly became a lake. Everyone in the valley ran uphill to avoid being drowned. And in eastern Nepal, the main road to the Sindhupalchok region and the road to the neighboring district Dolkha, the epicenter of the second major earthquake, had just opened. Now a mudslide is blocking it too.

People from the villages say that it was monks who offered real help in the remote areas. They were the first to reach these places, when there were no reporters, no army, no aid workers. Just monks. Traveling around Kathmandu, I hear the same thing over and over. In fact, here, the monasteries are also providing shelter of a sort. Kathmandu is a very crowded city, with few parks or open spaces. Now it's not safe inside the houses. And it's not safe outside the houses either--they might collapse at any minute. Monastery courtyards and nearby spaces have become a great resource. People are camping there, getting water and electricity from the monasteries. Our nunnery near Boudha has made their water, showers, toilets and nightlights available to hundreds of families living in tents and tarpaulins. 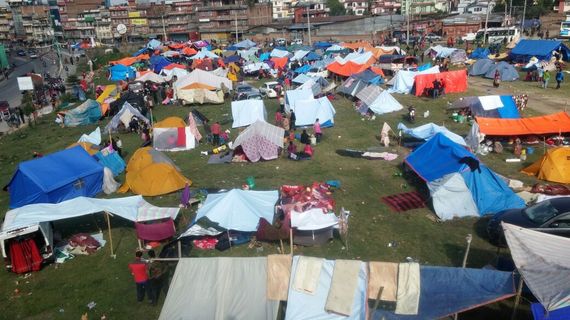 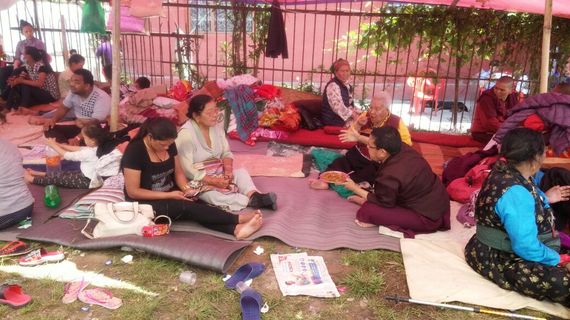 Meanwhile, in Sindhupalchok, my father's district, almost a month after the earthquake there are still bodies buried in the rubble. The area was the epicenter of the second earthquake. Many of my relatives died there. Many others who tried to go back to help or get things were buried under a landslide. After that, all the villages were completely abandoned. I am told that the town of Shingati Bazar in Dolka, the next district, is covered by landslides from both sides of the valley. Not a single house is still standing.

The area spreads into China, but the Chinese government evacuated everyone by order, sending them to the Tibetan region's second largest city Shigatse (Xigatse). Several of our monks went to the area on vacation. Some were evacuated by the Chinese. Some returned to the monastery in Kathmandu. Two remain missing. Even their friends and relatives don't know what happened to them, but it looks bad to me.

Within a few weeks the rainy season will begin in earnest. Even without the earthquakes, there are mudslides every year. Now the ground is soft and broken. And the need for housing is going to make it worse.

Usually the government forbids logging. But in order to provide shelter to the homeless, the government says they have decided to distribute metal sheets for roofs and allow people to cut down trees to make temporary shelters. The need for shelter is a serious problem--in fact, one we are working on at Buddhist Relief Services(BRS). But cutting down trees does not seem to me to be the answer.

Today I visited a place where they are showing people how to build houses. They are very basic, one-story structures, built with local materials that are safe and healthy. And they are designed by engineers to be more durable against earthquakes.

When I leave Kathmandu I will be talking to our team in Asia about how we can help. The coming monsoon makes the next four months a dangerous time in Nepal. We need to do something.