To read Sarah Palin's shockingly shallow Going Rogue, one is immediately struck by how nasty and vindictive Palin is and by the fact that her book is little more than a veiled mechanism for settling scores with old foes who have triumphed over Palin throughout her lifetime.

Is Palin really going rogue? Hardly. Getting even is more like it.

Palin's biggest score to settle is with those senior advisers--Republicans all--in the John McCain campaign, on whose shoulders Palin lays the blame for her failed and tortured debut on the American political stage last fall. Most notable among them, of course, is "The Bullet," Steve Schmidt, who took over McCain's teetering campaign in July of 2008 and was a staunch advocate of Palin's selection as McCain's running mate.

He has told the Huffington Post that Palin's allegations against the McCain campaign are "total fiction."

Schmidt now joins a host of former McCain staffers, including Mark Salter and Nicolle Wallace, who have challenged the veracity of Palin's book even before it hits the streets on Tuesday. One McCain aide who worked closely with Palin and who "liked her personally" described Palin's account of the campaign as "blatantly and absolutely inaccurate."

McCain aides are shocked-- though not entirely surprised--by Palin's allegations. They caught enough of her act during the 60-plus days of her campaign sojourn to know that she plays "fast and loose with the truth."

As for Palin labeling Schmidt "cool," "grim-faced" and "rotund," Schmidt, a former high school tight end with a beefy six-foot frame, joked, "Why are they always picking on the bald guy?" 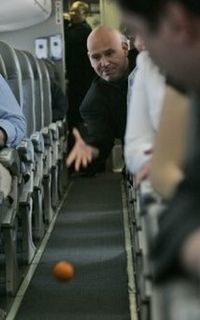 A former Bush operative widely respected in Republican circles for his managerial skills and focused demeanor, Schmidt is precisely the type of disciplined task master that Palin has bristled against all her life. The scattered Palin's biggest complaint about Schmidt: he's "business to the bone."

Palin contends that Schmidt came to her midway through the campaign and confronted her about her consumption of so-called Atkins bars and told her that she needed to "get off that Atkins Diet." In fact, Schmidt and campaign manager Rick Davis had heard concerns from both staffers and the press that Palin was dieting to the point of impacting her performance on the campaign. Palin, according to senior staffers, was concerned about not looking heavy on camera and was thoroughly obsessive about her appearance and every little comment that was made about her looks.

Palin also contends that in the aftermath of her humiliating prank phone call by a comedian posing as French president Nicolas Sarkozy that Schmidt called Palin angrily screaming, "How can anyone be so stupid?!"

According to two McCain sources, one of whom was on the bus with Palin at the time, the phone call never happened. "There was an email," he said, "but never a phone call. This is a pure fabrication."

Palin also contends that Schmidt used profanity in front of her young daughter Piper. Those who have worked closely with Schmidt are most outraged by this particular Palin assertion. "Steve is a great father to his young kids and totally respectful of children," said a long time associate who has worked with Schmidt in "different capacities," including on the McCain campaign. "I never saw it happen. Not once. That charge is 'other worldly'."