Most states now have bullying laws that require schools to adopt bullying policies, and efforts to combat school bullying have escalated over the last decade, according to a report released today by the U.S. Department of Education.

The list of states with bullying laws grew by one more today, when Michigan Gov. Rick Snyder signed anti-bullying legislation, following extensive debate and disparate drafts originating from the state House and Senate. The piece of legislation Snyder signed today was the House version that represents a compromise among Republican lawmakers, dropping a bill from the Senate that critics called "a license to bully."

Georgia became the first state to implement bullying legislation following the 1999 Columbine shootings. By the report's conclusion in April, Hawaii, Michigan, Montana and South Dakota were the only states that remained without bullying laws.

"Every state should have effective bullying prevention efforts in place to protect children inside and outside of school," Secretary of Education Arne Duncan said in a statement Tuesday. "This report reveals that while most states have enacted legislation around this important issue, a great deal of work remains to ensure adults are doing everything possible to keep our kids safe."

The report, "Analysis of State Bullying Laws and Policies," summarizes existing bullying laws in the 46 states. It finds that in 2010, 21 new bills were passed across the country and eight more passed through state legislatures until April 30, 2011. 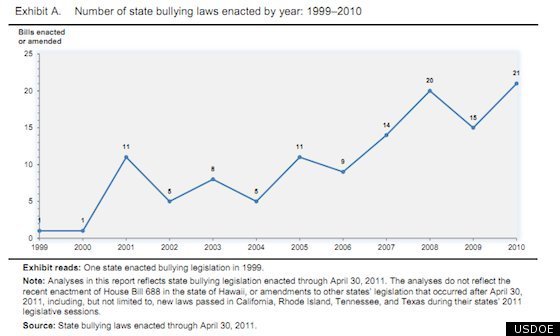 A follow-up study will examine how state laws are actually practiced in localities and at the school level.

The Education Department hosted its first annual Federal Partners in Bullying Prevention Summit last year, after which the agency drafted a guidance document, "Anti-Bullying Policies: Examples of Provisions in State Laws," to respond to requests for support and address the gap in information about the country's bullying laws.

California is the first state that requires public schools to teach about the contributions of gays and lesbians, and a measure to curb anti-gay bullying passed the state Senate in September.

New Jersey passed a law in January, effective as of September, requiring anti-bullying policies across the state's public schools. Known as the "Anti-Bullying Bill of Rights," the law is said to be the toughest piece of anti-bullying legislation in the country.

Clarification: This piece originally cited Michigan as one of the states without a bullying law, but created a model policy. While this holds true for the purpose of the Education Department's report, Michigan passed a bullying law this week, following the study's conclusion.