Great teachers, stable families and a school's location have long been said to be key to student success. But a new study out of the United Kingdom suggests that a school's physical design can improve or worsen children's academic performance by as much as 25 percent in early years.

The year-long study by the University of Salford's School of the Built Environment and British architecture firm Nightingale Associates examined 751 students in 34 classrooms across seven primary schools for the 2011-2012 academic year. Students were assessed at the beginning and end of the year for academic performance in math, reading and writing, and classrooms were rated on environmental qualities like classroom orientation, natural light, acoustics, temperature, air quality and color.

"It has long been known that various aspects of the built environment impact on people in buildings, but this is the first time a holistic assessment has been made that successfully links the overall impact directly to learning rates in schools," Peter Barrett, a professor at the University of Salford, said in a statement. "The impact identified is in fact greater than we imagined and the Salford team is looking forward to building on these clear results."

The study will continue for another 18 months across an additional 20 schools in the U.K. Researchers seek to apply their findings to help schools "maximize their investment in the learning environment." 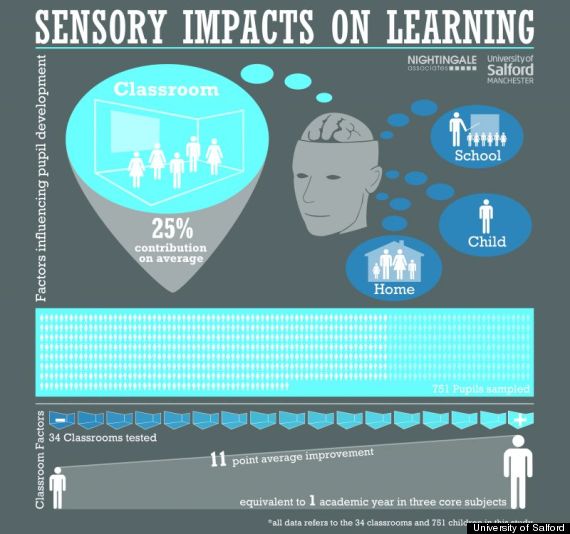 Architecture and design magazine Dezeen reports architects in the U.K. are now using the study to fight the government's recent restrictions on school building designs, including a ban on curved and glass walls. Education department officials, on the other hand, are dismissing the study's preliminary findings.

"There is no convincing evidence that spending enormous sums of money on school buildings leads to increased attainment. An excellent curriculum, great leadership and inspirational teaching are the keys to driving up standards," a government spokesperson told Dezeen.

The Salford-Nightingale findings come as an estimated 14 million children in the United States attend crumbling public schools with leaking roofs, moldy walls and dangling ceiling tiles, among other deteriorations. The National Education Association, the country's largest teachers union, says the situation has gotten so bad that at least one-third of the United States' 80,000 public schools need "extensive" repair.

A 2007 Department of Education survey found that 43 percent of schools in the U.S. see the condition of their buildings as "interfering with the ability of the school to deliver instruction." The effects of such conditions were reported to range from lower student achievement to reduced teacher productivity. Just refurbishing those schools into "good overall condition," however, would require $127-322 billion in spending, according to the National Center for Education Statistics.

Still, local governments around the world are reshaping students' learning experience through forward-thinking school designs. Below, see some of the most beautiful and imaginative public schools on earth:

The Most Beautiful and Imaginative Public Schools in the World