As American children return to school, 70 million children in developing countries cannot go. Modest school fees keep them blocked from education, job opportunity and earning potential. This summer I traveled with The School Fund, an all-volunteer team using breakthrough technology via their website to send kids to school. 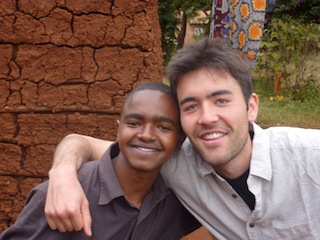 "If you have education you get a good life." --John Medo
Karatu, Tanzania: The equatorial summer sun broils the grass atop a hill in Karatu, Tanzania, where 14-year-old John Medo swings his scythe in quiet swoops: chop, chop, chop, scoop. He'll earn a few shillings and take the cuttings home to his family cow, which otherwise would starve. John's about to meet his best friend, and together they will set in motion a
project
that radically will change outcomes for themselves and students around the world. Pausing to wipe his forehead with a cloth, John looks up at the building behind him, a hotel for tourists en route to safari. A skinny
mzungu
-- white person -- is waving to him from the balcony. It's 18-year-old Matt Severson, vacationing in Africa with his parents to celebrate his high school graduation. John smiles and waves back, as wide as his arm will go. "I was just cutting grass at the hotel. I was not so good in English. I could only say maybe three words: 'hello,' 'let's go,' and to give my address," John recalls. The next day, his lanky American friend runs down to help wield the scythe. Matt's mom stands laughing on the balcony above, not knowing that in the years to follow, John will say, "His mother is like my mother, and my mother is like his mother." In halting English, John invites Matt to come to his home and meet his family; so, off they go. "I could tell from the beginning that John was a leader," Matt says. "He's charismatic -- he has a good smile, and a good laugh. When he took me to his house, we had about 20 people following us." John's family welcomes Matt, and his mom Christina prepares fresh milk from the family cow for them. The next day, the two boys tour John's school. John has just passed his high-school entrance exams, but to no avail. He cannot afford to go.
Top Student Could Mow Lawns for a Lifetime
John's parents both work hard: Dad Medo is a hired carpenter. Mom Christina embroiders clothes and runs a vegetable-drying business that preserves greens without electricity. Still, John's school fees will total $150 U.S., and they never can raise that much capital. "My dream," John proclaims as they walk back to the hotel, "is to become president of my country." Even across English-Swahili language barriers, Matt has heard enough in a few days to realize: "Here is this kid who's obviously very bright, who came from humble beginnings -- a dirt house, a cow -- and his dream of becoming president would have been crushed." Matt simply cannot reconcile the lack of $150 with the trap into poverty and menial work that awaits John without it. "We have only one shot at this life," Matt insists. "When I met John, we were at a similar juncture in our lives. We could go left, and not get an education. Or we could go right, and a wealth of opportunities would open up. Just because of where I was born, doors were open to me. Because of where John was born, in a poor place like Tanzania, doors were closed."
Forging a Friendship From Equal Opportunity
According to a
2011 UNICEF report
on the state of adolescents worldwide, 1 of 5 is not in school. In Sub-Saharan Africa, where The School Fund began its work, that's 1 in 3. Matt and his family must leave Africa that night. But first, they gather up the $150 John needs to start high school that fall. The Medo family, in turn, share what they have, insisting Matt take embroidered tablecloths for his mom's kitchen and a Maasai-plaid blanket to keep him warm when he starts college in a few weeks. "I'm always shocked by how generous the [Tanzanian] people are when they don't have much," notes Matt.
Students for Students, Building an Online Community from Scratch
Fast-forward to summer 2011: John Medo has graduated high school and passed his college entrance exams. Matt kept his promise to sponsor John -- and he and a team of
all-volunteer students
have taken matters into their own hands to get kids like John through school. Beginning with a few hundred donated dollars, Matt and his team launched
The School Fund
, a website platform that allows:


In December 2010, they obtained 501(c)3 status as a legal nonprofit and have grown rapidly ever since.

Currently, The School Fund sponsors about 500 qualified secondary students in 12 countries. Students must meet three requirements: attendance, performance and journaling. Most have never seen a computer screen before their teachers take them to the local Internet café to log their progress on The School Fund website.

The Influence of a Best Friend Over Time

"The School Fund has become a huge part of my life," Matt reflects as he sits outside the Medo family home. Keeping in contact through The School Fund's online journal, emails, and annual summer visits, John and Matt have grown up together. They have become best friends.

"Matt is a kind person," John nods toward his mzungu friend. "He loves all the people which he meets -- it's as if he has always known them. He doesn't put them into groups. Through Matt, I have learned how to love all people."

"Well, I've learned a few things from you, too," Matt replies.

"You taught me how to be bold, how to ask for what I want. That's really helped me in building support for The School Fund.


"We intend to keep growing. We want to become the primary place [on the planet] where people go to complete their secondary education: to scale to 10,000 students in the next five years."

John's mom and sister quietly serve uji wamaboga -- pumpkin porridge cooked over their kitchen fire -- in steaming mugs. The air has begun to turn with an autumn chill, and the boys warm their hands on the mugs. Neighborhood dogs bark, and roosters crow incessantly. Little brother Eliatosha runs through the yard with his friends, dribbling a soccer ball.

Matt sits back with a sigh, taking it all in, at the mud hut that's become his home away from home. "I used to think cars and clothes and houses were it. America was it. The School Fund opened my eyes to how billions of people live in the rest of the world... and the power that a lot of us have to change that world."

Matt and John dream of buying neighboring plots of land someday, up the hill near the hotel where they first met, and building homes where they will raise their families side-by-side. They have learned how much they have in common, despite how different their lives looked when the grass-cutter boy met the tourist teen four years ago.