In Mississippi's Carroll County school district, there are no advanced placement courses, no foreign language classes and not enough textbooks for children to take home at night. Until last year, students on the high school football team had to change clothes in a makeshift room that previously functioned as a chicken coop. Two years ago, the district's superintendent, Billy Joe Ferguson, cut his own salary from $87,000 to $18,000 in order to free up funds for the schools.

Schools in Mississippi are provided with some of the lowest levels of state and local funding in the nation, according to two reports released simultaneously Monday detailing disparities in school resources around the country. For most of the past 10 years, the state has failed to live up to its own law requiring certain funding levels for schools.

Unfortunate circumstances like the ones in Carroll County can be seen across the country, say the reports from the Leadership Conference Education Fund and the Education Law Center, a New Jersey legal and advocacy group. The first report, from both groups, takes a qualitative approach, using anecdotes to show how inequities in school funding shortchange the nation's most vulnerable children. The other report, from the Education Law Center only, evaluates the level of school funding "fairness" in each state, focusing on four measures using 2012 data: funding level (the average state and local revenue spent per pupil), funding distribution (how funds are distributed between high and low-income areas), effort (how much a state spends on education relative to its gross domestic product) and coverage (the proportion of a state's children in public schools versus private schools).

The idea, according to the report, is to see if states "support equal educational opportunity for all students and, in particular, for low-income students in school districts with concentrated poverty."

Indeed, at a time when an increasing number of students qualify for free or reduced-price lunch nationwide, the disparities in school resources across zip codes are deep.

"In too many places -- urban, suburban, and rural -- our schools are struggling to find the resources they need to serve all children well. This is especially true in communities that serve students most at-risk, including children from low-income families and children of color," says the groups' report. 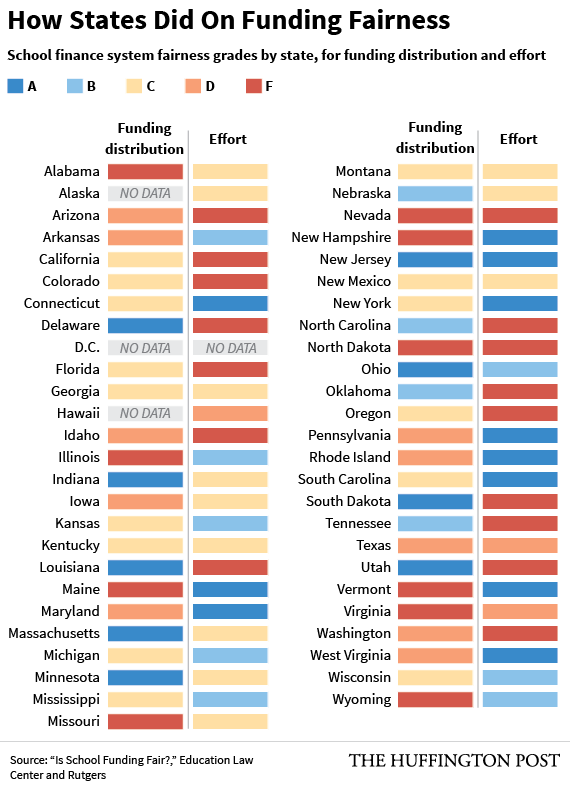 Overall, the report notes, only two states score relatively well in all four fairness indicators: Massachusetts and New Jersey. Still, on a call with reporters, report authors noted that this data is from 2012, and New Jersey's standing since then may have slipped under the Chris Christie administration. Missouri, Alabama and Virginia were consistently low scoring.

The Education Law Center report also looks at indicators like wage competitiveness, pupil-to-teacher ratios and early childhood education enrollment when evaluating how state funding impacts educational resources. The below map shows where teachers have competitive wages by age 45, compared to non-teachers with similar education levels, experience and hours. In the state with the most competitive wages for teachers, Wyoming, educators make 94 percent of what non-teachers make. 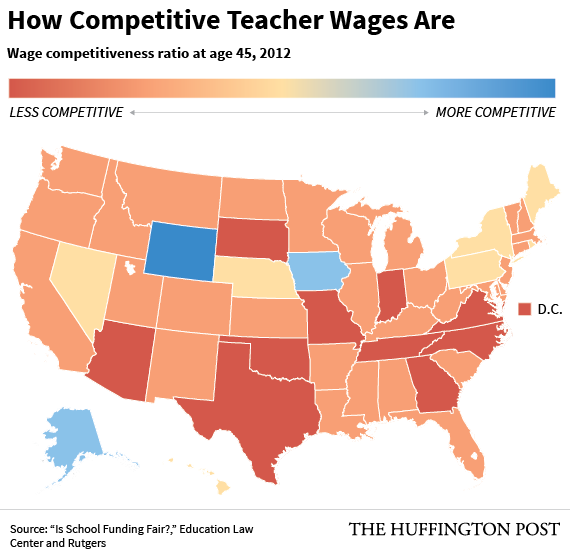 Data released by the Department of Education earlier this year bolster the reports' findings, showing that during the 2011-2012 school year, 23 states spent more per pupil in affluent districts than high-poverty school districts. After the Great Recession, many states slashed their education budgets. By 2012, many states still had not restored these funds, even while the economy had improved, say the reports.

Funding disparities lead to a lack of education opportunities, Randi Weingarten, president of the American Federation of Teachers, suggested in a statement.

"Teachers across the country will tell you that kids thrive when they have art, music, physical education and extracurricular activities; services to meet physical, mental, social and emotional needs; and multiple pathways to high school graduation and good jobs, like those we see in today's career and technical education programs. But none of this is possible unless we reduce the unconscionable funding disparities. Only then can we help every child in America succeed," said Weingarten.