Though school-sponsored prayer in public schools was ruled unconstitutional more than 50 years ago and the Supreme Court decided more than 20 years ago that public schools cannot sponsor prayer at graduation ceremonies, the topic continues to be one of the country's most controversial.

The prayer debate echoed again across TV screens and newspaper headlines this month when Roy Costner IV, a valedictorian at Liberty High School in Liberty, S.C., surprised his graduation audience when he ripped apart his pre-approved speech on stage and instead said the Lord's Prayer. Costner IV later told reporters he was making a statement about how "taking prayer out of schools is the worst thing we could do."

Turns out that many Americans may agree with him. According to a Pew Research Center poll conducted last year, 65 percent of Americans said "liberals have gone too far" in attempting to keep religion out of schools and government. A smaller number of Americans, around 48 percent of those surveyed, told Pew that conservative Christians have gone too far in trying to "impose religious values on the country." 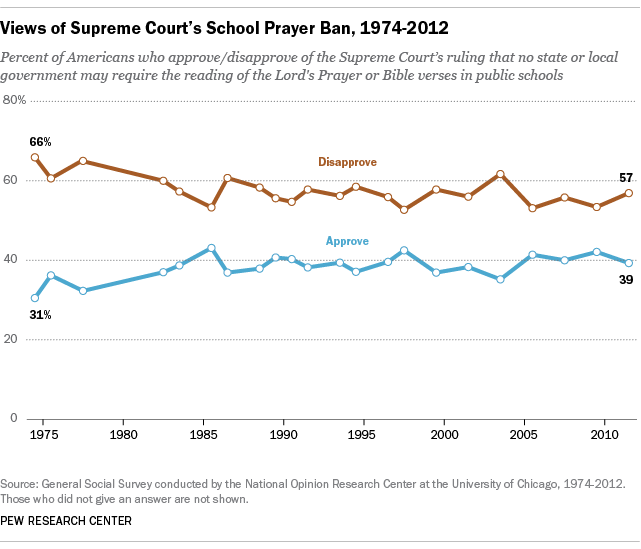 According to data Pew plucked from last year's General Social Survey, a majority of Americans disagree with highest court's position on prayer in public schools. On the court's ruling that the government can't require the Lord's Prayer or Bible verses to be read in public schools, 57 percent said they disapproved of the decision, compared to 39 percent who approved. More than seven-in-ten Southerners, such as those in Costner's state, said they that they disapprove of the court rulings.

At the same time, people ages 18 to 29 are more likely than any other age group to say they approve of the ban on prayer in public schools. More than 56 percent agree with the court's rulings.

Pew also reports that Americans are well-versed in court decisions on school prayer. In its 2010 Religious Knowledge Survey, which famously found atheists and agnostics to be the most religiously knowledgeable of all religious groups, the question people were most likely to answer correctly was about whether the Supreme Court had ruled in favor of prayer in public schools. Nearly nine-in-ten people said that prayer was not allowed by the court's ruling.

That survey also showed that people think restrictions on religion in public schools are tighter than they really are. For example, teachers are allowed to lead classes on comparative religion, but only 36 percent of people knew that. Teachers are also allowed to read from the Bible -- as a literary text -- but only 23 percent of respondents said that was allowed.

In an in-depth article this week, the Christian Science Monitor argued that despite official bans on school-sponsored prayer and perceptions of laws against prayer, "God and faith are probably present in more ways now than ever in public schools." The newspaper cited the immense growth since the mid-1960s of the Fellowship of Christian Athletes, for example, which has "has established itself on more than 8,000 junior and high school campuses, many of them public." It also pointed to the growth of Campus Crusade for Christ, which started as a college organization but now has more than 200 high school clubs, most of which are at public schools. The paper added that Good News Clubs' "Sunday school-like" classes in about 3,200 public elementary schools.

The Atlantic came to a similar conclusion in its recent report:

It took a while, but by the late 1980s, educators started to reach consensus about how to teach religion. Guides were published about how to treat religious holidays in the schools, how to teach students about religious traditions, and how to create equal access for organizations, including religious clubs on campus. In 1995, roughly three dozen groups representing numerous faiths as well as a secular humanist organization designed a joint statement on religious liberties, showing support for what could be done legally in the schools, and disputing the claim that schools were "religion-free zones."


"As the nation awaits landmark decisions on voting rights, affirmative action, and marriage equality cases, it’s important to remember that sometimes the high court’s ruling doesn’t close the book on an issue," MSNBC noted in its own piece on religion in schools. "It’s only another chapter."