The American Revolution ultimately came together with the widespread distribution of a pamphlet that spoke truth about power. Tonight, August 14, is the start of a public awareness campaign to take a close look at the school reform movement through a modern day equivalent of Thomas Paine's Common Sense -- an hour-long documentary called Education, Inc. It is not something that the billionaires behind the so-called reform movement want you to see. The brilliant award-winning film-makers, Brian and Cindy Malone, navigate their way through a complex and seemingly diabolical scheme to "reinvent" education where school reform is sold through a sophisticated advertising smoke screen touting "choice" for children. How do they expose what's really happening? The premise of Education, Inc. is simple: Follow the money. 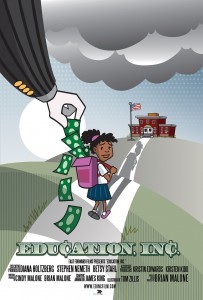 The pot of $600 billion dollars of taxpayer money, allocated every year to educate American children in public schools, has proven to be irresistible to corporate and political interests. They have found a way to siphon off some of that money for less accountable ventures--charter schools and vouchers--preying on the natural parental desire to give their own kids something better than what they already have. Their business model is simple: shake loose the money so that it changes hands. When money changes hands, pockets are lined. Before you dismiss this premise out of hand, you must see this film.

The Malones want to be totally transparent about money and their own involvement. So they announce upfront that they funded the production themselves out of their savings. For about $20, they are selling DVDs of the movie for private screenings across the country. They are not trying to protect their copyright. They are just trying to recoup some of their costs. Brian Malone told me:

" As far as the message I am trying to get out... we'd like citizens and parents across the country (and the world, see New Zealand and Sweden for example) to be aware of the secretive corporate takeover of public education. There are hundreds of millions of dollars being spent every year to turn over public school to private corporations and free-market ideologues. Through clever marketing and trigger-based political advertising, these hedge fund managers and business interests are picking the pockets of our tax dollars to add to their profit. They use millions of dark money.. that is very hard to trace... and they use powerful language like 'Every child deserves the best choice... etc.' And they count on people to not pay attention to local school board races.... which most people do not.

I want people to know that their public education tax dollars are being stolen right under their noses."

And he encourages organizers of screenings to drop a pin on a map showing their location.

One question not addressed in the film is: Are the new entities created by the reformers--the charters and vouchers--doing a better job than the public schools? I have some insight into that because I served on the board of a charter school for a year and a half. The founding members of the board were honest, idealistic and passionate. It took them five years to finally get the charter for a science and technology K-5 elementary school. I was on the board because I know something about teaching science. I left the board because they didn't use me for my expertise. Running a school is not for the inexperienced. Systems must be put in place so that the focus can be on instruction. In five years, they didn't get the reading/math scores into an acceptable range. They kept their charter mainly because they really spent all the money on the kids and they could account for it. They are still struggling to get instruction right. I wrote a post about that experience. But one take-away from Education, Inc. is how could the charters and vouchers be better than public schools when money that should be spent on the kids is disappearing into private investments?

Education, Inc. documents the rumblings of unrest in the public along with efforts of those in power to suppress the unrest. I am not one of those blinded by the corporate reformers yet screening the movie made the steam pour out of my ears. The greatness of our country comes when the public is moved to organize, protest, and sacrifice. People are starting to pay attention to the rotten smell that accompanies school reform. Let's see if the wave of private screenings of Education, Inc. that is starting tonight adds momentum to the movement to take back our public schools.