School Refusal Is a Real Thing -- Here's What You Can Do originally appeared on Babble.com and was reprinted with permission. 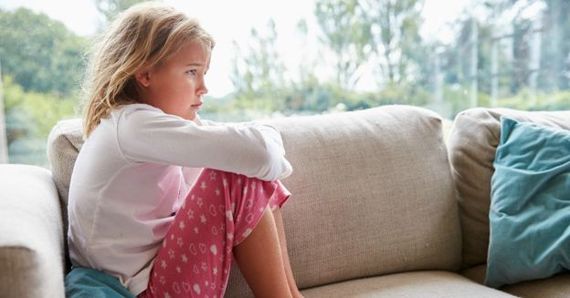 It began almost out of the blue, and Lucy couldn't figure out why. On a Monday morning early in the school year, her 10-year-old daughter Victoria insisted that she wasn't going to school.

Has this ever happened to you? It's common for a child to occasionally not want to go to school. They may not be ready for a test, have missing homework, or just want to watch TV or play instead.

But Victoria's insistence made Lucy wonder: Was something else wrong? Though Victoria was a good student with many friends, she was also sometimes anxious.

But Victoria was not budging.

She refused to leave the house, and Lucy eventually relented and decided to stay at home with her daughter for the day. She'll be fine tomorrow, Lucy thought to herself.

The next day, Victoria still refused to board the bus. But this time, Lucy drove her to school. Later in the day, the school nurse called to report Victoria claimed to be sick, and wanted to come home.

The next morning it happened again: Victoria refused to go to school. The pattern continued for several weeks, until Lucy became really worried and made an appointment with their pediatrician. After examining Victoria, Dr. Chen said she was physically fine, but noted that Victoria was anxious, and that talking about school upset her.

Lucy agreed, and added, "Just driving by the school gets Victoria worked up."

"There's a name for this," Dr. Chen said. "It's called 'school refusal,' and it's more common than you might think." She made several suggestions, including not forcing full attendance at school right away. "Still, it's important that Victoria go back to school," said Dr. Chen. "The longer she stays away, the harder it will be for her to return. But it will be best if she is allowed to re-enter gradually."

Dr. Chen made a few more suggestions. "Give these things and try, and come back in a month. "If things aren't getting better, I can refer Victoria to a mental health professional for an evaluation," she said.

Here are some of Dr. Chen's suggestions:

Arrange a meeting with the child's teacher outside of school. Victoria saw that Ms. Stein cared about her and wanted her back in class.

Victoria began by sitting in the car outside of the school. Next, she attended school for an hour each day. Her time at school was steadily increased. She was not allowed to skip days.

Involve the school counselor or social worker for support and ideas.

The social worker became a "safe person" Victoria could count on.

Talk with the child about his or her feelings and fears.

Once Victoria was able to understand her feelings, she worked with Lucy and Dr. Chen to change how she thought about school and her school refusal behavior.

Discuss what's fun about school, such as being with friends and playing at recess.

For Victoria, this included the science fair.

"No one's perfect," Lucy told Victoria. They celebrated Victoria's progress in getting to school regularly. Working toward a goal is more fun when there's a reward at the end!

Set a time limit on interventions.

If they don't work, reconnect with your pediatrician and consider a mental health assessment by a child/adolescent psychiatrist.

Progress didn't happen overnight. There were setbacks, and some days were more challenging than others. But Lucy believed that things would improve for Victoria, and she said so often. Eventually, Victoria was in school all day, every day.

Things gradually returned to normal. Caught up in their busy lives, Lucy and Victoria didn't talk much about Victoria's period of school refusal. There were soccer games and choir concerts and spelling bees. And a nice beach vacation over spring break.
The night before school started again, Lucy tucked Victoria into bed. They chatted a little about the vacation, and then Victoria said something unexpected. "It was so much fun, but I'm happy we're home," she shared. "I'm ready to go back to school tomorrow!"

For more information on this topic and more, visit Pacer.org.

More:
raising kidsKidsParentsschoolsBack To School
Newsletter Sign Up
Raise the kind of person you'd like to know
Subscribe to our parenting newsletter.
Successfully Subscribed!
Realness delivered to your inbox