While many of the major gains in the South since the Supreme Court's decision in Brown v. Board of Education have been reversed in recent years, a new report says that, at the very least, things are not as bad as they were before the court ruled to desegregate U.S. schools.

“Contrary to many claims, the South has not gone back to the level of segregation before Brown. It has lost all of the additional progress made after l967 but is still the least segregated region for black students,” says the report, released Thursday by researchers at UCLA’s Civil Rights Project.

Published just days before the 60th anniversary of the landmark Supreme Court ruling, the report, titled “Brown at 60: Great Progress, a Long Retreat and an Uncertain Future,” takes a look at schools’ demographics since the days when the National Guard had to be brought in to ensure that black and white students could learn together safely. While the report says that Brown -– and subsequent court decisions on desegregation -- were initially successful, especially in the South, schools have become increasingly re-segregated since the 1990s.

The graph below breaks down by region the percentage of black students in intensely segregated schools. 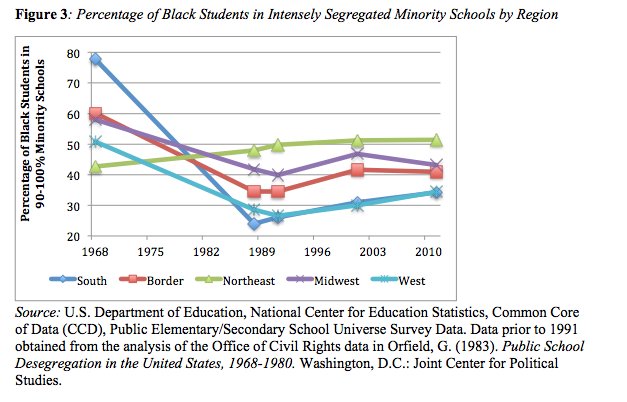 A subsequent graph breaks down how things look in the South, the region that had the longest way to go in terms of desegregation immediately following the 1954 Brown decision. According to the report, “claims that black students in the South are no better off than they were before Brown, in terms of segregation, are obviously wrong. They are ten times as likely to be in majority-white schools as they were when the l964 Civil Rights Act was passed.” 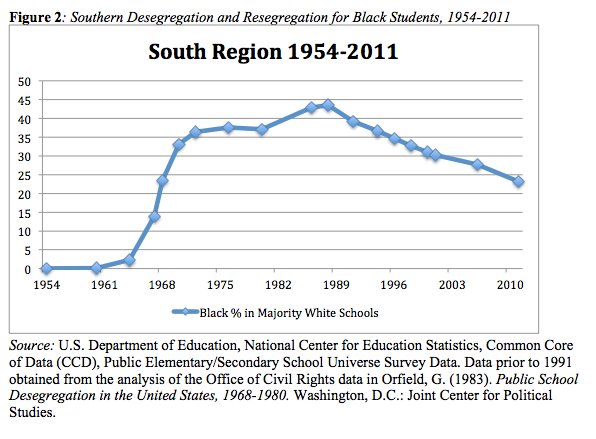 While the report maintains that “many of the changes accomplished in the civil rights era have had some enduring impact,” it expresses grave concerns about a recent retreat back to former patterns. The researchers implore President Barack Obama and his administration to take action on this issue, writing that the administration thus far has produced “no major encouragement nor incentives for working on integration.”