Eleven seasons after airing its first school shooting-themed episode in 2004, "Degrassi" went there again in the show's latest incarnation on Netflix.

(Spoilers for "Degrassi: Next Class" and other shows ahead!)

The new series, "Next Class," revisits the issue of school shootings in its finale "#SorryNotSorry." The episode follows introverted sophomore Hunter Hollingsworth (Spencer MacPherson), who is shunned by his peers after he's exposed as one of the trolls who threatened a fellow student on social media. Unlike the series' first take on on the subject, there's no actual shooting this time around. But the episode serves as a reminder that just like sex, drugs and acne, the threat of gun violence in schools is very much something that teens have to worry about.

"Degrassi" is shot and set in Toronto, but the show's biggest fan base is in the U.S., thanks to its presence on TeenNick. And with every passing year, the production of the show becomes shiner and the new cast members more attractive -- in other words, more Americanized. While the issues Canadian and American teens deal with generally aren't so different, it's important to note that from the time the series first tackled the issue in 2004 until its most recent episode, there were a total of seven school shooting in Canada, versus 163 school shootings in the United States in the past three years alone.

The show's executive producer and writer, Sarah Glinski, told E! News that, in tackling the school shooting storyline again, the writers always knew they didn't want the character to go through with the act this time around.

"We had talked about the finale episode and him bringing a gun to school, I think we always knew that we didn't want him to do it," she said. "We wanted to talk about what people [like Hunter] needed from the people around them, from their friends and family, so they're not alone, that there's an opportunity to talk them back. So that was always the plan."

Even though no shots were fired in the episode, it still should have been shocking to viewers. As Glinski noted, in 2004, a student bringing a gun to school was surprising. In 2014, after the massive increase in school shootings shown in the media, that same storyline isn't.

While at this point, yet another school shooting episode may seem trite, the data prove it's as relevant as ever.

"Degrassi" isn't the first -- and likely won't be the last -- TV show to depict a school shooting on screen. In fact, the subject has been a surprisingly common theme in some of our favorite TV shows since the mid-'90s. Read on to see which shows tackled the topic successfully and which fell flat.

"My So Called Life" addressed school shootings in the episode "Guns and Gossip." After a gunshot goes off in school, Brian Krakow (Devon Gummersall) feels pressured to tell someone that Rickie (Wilson Cruz) brought the gun, even though it wasn't true. Rickie did, however, want people to think he brought the gun, thinking it would stop others from bullying him for his sexuality.

Aside from touching on gun violence, the episode brought attention to the potential effects bullying can have on an impressionable teen mind.

But not everyone thought it was successful. Reflecting on the episode in 2014, Gawker's Jacob Clifton said, "Rickie's defense of high school concealed-carry basically comes down to 'the only thing that can stop a bully with a gun is a gay kid with a gun,' which works on a character level but is some bullshit by any other standard."

The episode aired at a time when guns and metal detectors in school were a big topic of discussion, as the AV Club noted.

In "Johnny Get Your Gun" the show tackled the general theme of violence among children.

In one scene, Simon (David Gallagher) is threatened by Johnny (Jake Richardson), a classmate and the ex-boyfriend of Simon's new girlfriend, who says he's going to kill him. Simon's dad, Eric (Stephen Collins), finds himself trying to protect his son and ends up getting shot by Johnny instead.

The episode ultimately drove home the "if you see something, say something" message. It was extra sensitive because it dealt with young kids, who arguably don't always know how serious the consequences of their actions can be.

The episode "Earshot" first aired almost exactly five months after Eric Harris and Dylan Klebold murdered 13 people and injured 21 others when they opened fire at Columbine High School on April 20, 1999.

The shooting was still fresh in most people's minds when the show aired the episode in which its teen vampire hunter (Sarah Michelle Gellar) develops the ability to read minds and learns that a fellow Sunnydale High student is plotting to kill everyone. Ironically, the episode wasn't a response to the massacre at Columbine but was originally slated to air a week after the shooting.

For a show like "Buffy," which dealt with a new Big Bad each season, a boy with a gun proved to be just as terrifying as anything the Hellmouth could throw at the Scooby Gang.

After being pranked on a quiz show by his peers, Rick finally snaps and ends up shooting Jimmy, who he thinks was responsible for the prank, leaving him paralyzed from the waist down. He also aims at Emma (Miriam McDonald), claiming that she just "played him" when they were dating. But before Rick can shoot Emma, Sean (Daniel Clark) intervenes to protect her and accidentally shoots Rick.

Rick's motives are nothing new. Bullying is often cited as a reason for these acts of terror, while the shooters' feelings of being ignored or mistreated by women are another (as was the case in the horrific Isla Vista shootings). The storyline continued in future seasons, as Jimmy's paralysis was a constant reminder of the tragic events that happened in the school hallways.

In the episode "With Tired Eyes, Tired Minds, Tired Souls, We Slept," "One Tree Hill" brought back Jimmy Edwards (Colin Fickes), a character who had been shuffled off the series after Season 1. Jimmy’s anger toward his former friends and tormentors at school resonated deeply with Tree Hill’s residents and the audience, both of whom had largely forgotten he existed.

After the episode aired, Hilarie Burton, whose character, Peyton, was injured in the shooting, revealed that many members of the cast were uncomfortable tackling the subject matter.

"We got the script, we were very upset about it... We were like 'This hasn't happened in so long. Why would we bring this up? We don't want to encourage or give attention to that kind of behavior,'" she told Fanvasion. "Then literally while we're having this conversation with our creator and our bosses, two incidents happened."

The episode, which was later dubbed "the Columbine episode," was well-received by critics who called it "a turning point for the series."

When we're introduced to Tate Langdon (Evan Peters) in Season 1 of "American Horror Story," we don't know that he's actually dead. We eventually find out in episode 6, "Piggy Piggy," that he was shot by police after he opened fire at his high school. The episode is set in 1994, five years before the Columbine shootings took place.

The storyline seemingly aimed for shock value more than anything else, and in the context of the show, it worked. It didn't sit so well with critics, though, and garnered backlash with some saying it "went too far."

"Obviously everything on the show, if done in real life, is insanely terrible -- maybe a viewer somewhere knew a man who had his neck snapped while drowning in an apple-bobbing tub and was gravely offended when the show did that -- but this particular set piece seemed so deliberately exact," The Atlantic's Richard Lawson wrote in a recap. "There was a particular event, or events, that they were trying to directly evoke and that's just cruel.

In the episode titled "Shooting Star," the New Directions are forced to hide in the choir room after hearing two gunshots.

Except it wasn’t a school shooting at all. Becky (Lauren Potter), a cheerleader with Down syndrome, brought a gun to school because she was afraid of the future and didn’t want her friend Brittany to graduate. Coach Sylvester (Jane Lynch) takes the blame for mentee Becky, who accidentally fired the gun before surrendering it to Coach; no one was injured in the episode.

The episode also garnered plenty of backlash, especially from the Newtown community, who were upset that no one among them was notified about the subject matter ahead of time.

In "#SorryNotSorry," the "Next Class" Season 1 finale,  Hunter brings a gun to a school dance after being shunned by his peers. In the buildup to the dramatic scene, Hunter snaps at one of his best friends, argues with his mom about confiscating his electronics and even writes a "kill list."

The shooting ultimately doesn't happen, as Hunter's older brother manages to call the police before anything fatal occurs.

Like Rick in "Degrassi: The Next Generation," Hunter is portrayed as someone who feels misunderstood and targeted by others. Once again, the show manages to depict a school shooting with sensitivity while also bringing awareness to issues like cyber bullying and mental health.

CORRECTION: An earlier version of this article stated that "Degrassi" aired its school shooting episode 15 seasons ago, when in fact, it aired 11 seasons ago.

NOTE: Seven school shootings occurred in Canada from the time "Degrassi" first tackled the issue in 2004 until its most recent episode on Jan. 15. However, an eighth shooting since occurred in Saskatchewan, Canada on Jan. 22.

PHOTO GALLERY
What Happened To 'Degrassi' Characters?
Download
Calling all HuffPost superfans!
Sign up for membership to become a founding member and help shape HuffPost's next chapter
Join HuffPost

These Classic TV Episodes About School Shootings Are More Relevant Than Ever
What Happened To 'Degrassi' Characters? 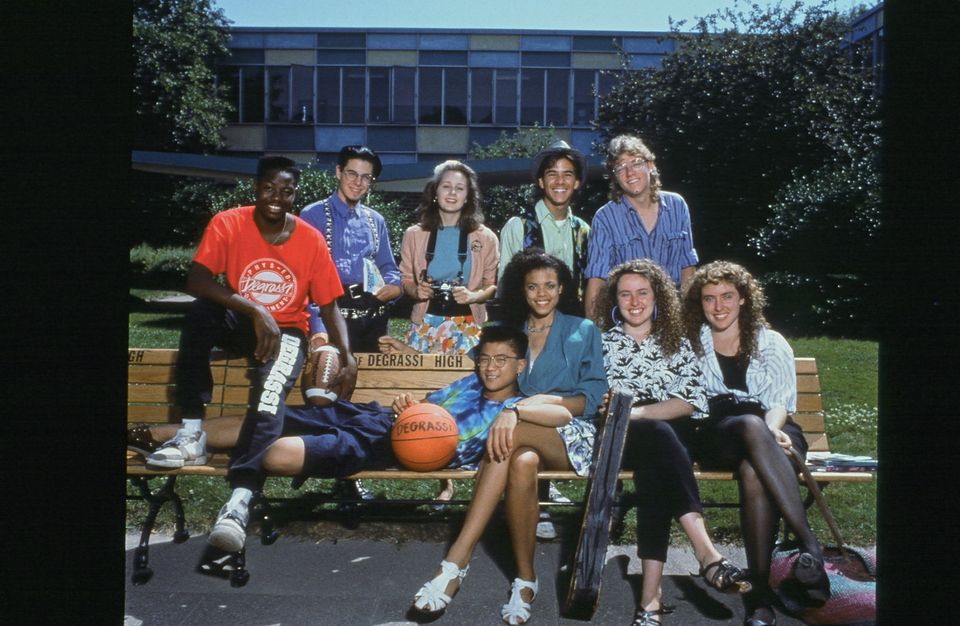