Writing in "first person orangutan" isn't easy. Just ask 10-year-old Caroline Mulcahy, a fifth grader at P.S. 107 John W. Kimball Learning Center in Brooklyn, New York. She and her classmates spent months during lunch and recess writing and illustrating a book, One Special Orangutan: The Story of Budi, about the plight of orangutans in Borneo.

The story is told through the eyes of a baby orangutan, Budi, who was rescued in December 2014 by International Animal Rescue, an NGO with a rehabilitation facility in Ketapang, West Kalimantan, Indonesia. For the first 10 months of his life, Budi was kept as a pet in a tiny chicken cage and fed only condensed milk--never solid food. "There was little space to move, and only a blanket and squeaky toy," Budi recounts in the book. 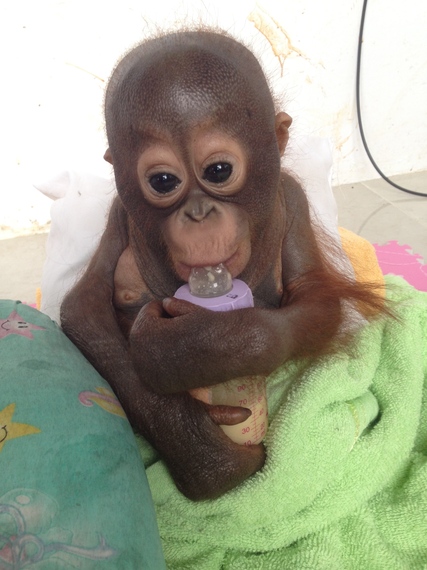 "The personal story of this one particular animal helped the kids identify with his situation and build their empathy," says Julie Fissinger, Mulcahy's mother and one of the parent volunteers who helped the students.

Searching for food, they venture onto the plantations where agricultural workers, who consider them pests, may kill them. Hunters also target orangutans for meat or the pet trade. The IUCN Red List of Threatened Species notes that 2,000 to 3,000 orangutans have been killed in Borneo every year for the past 40 years, representing a loss of more than 50 percent of the original population. The World Wildlife Fund estimates today's population of Bornean orangutans at between 45,000 and 69,000. (Scientists also say there are roughly 14,600 orangutans in Sumatra.)

The killings leave a lot of orphans, like Budi. When Budi was rescued, the one-year-old was in bad shape. His body was swollen from malnutrition. He cried at even the softest touch. He couldn't sit up or walk, and he was too weak to hold his own bottle. It took intensive effort by the team at International Animal Rescue to nurse the young ape back to health. 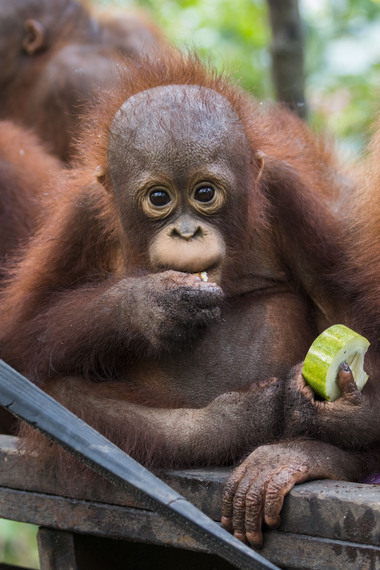 Today he's a very different orangutan. He spends his days at "nursery school," where he climbs, eats, and hangs out with Jemmi, another orphan. "He's making a lot of progress, but being brought up by another species, I don't imagine it'd be easy," says fifth grader Sarah Millward, who helped write and illustrate the book.

The student authors are proud that they can help Budi, and other orangutans, by telling his story and by donating the proceeds of sales of the book to International Animal Rescue.

"It was born out of a love for animals," says Katherine Eban, a founding member of the Parent-Teacher Association's "Beast Relief" Committee, which runs the book project. Parent volunteers from the committee lead writing and illustration workshops for the students, and they organize the children's work into the final book.

A Growing Body of Work

This is the third time that fifth graders at the school have created a book to highlight and benefit an endangered species. The first was One Special Rhino: The Story of Andatu, which tells about the first Sumatran rhino born in captivity in Indonesia. The second was One Special Elephant: The Story of Penelope Petunia, which tells of a baby forest elephant in Dzanga Bai, in central Africa, who is threatened by poachers. (Jane Goodall wrote forewords to both.) 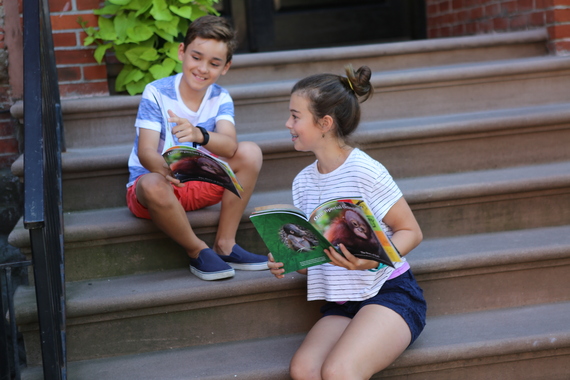 "The book project has become a rite of passage for the school's fifth graders," Eban says.

But its impact spreads beyond the page. For instance, Mulcahy and her mother now volunteer at the local animal shelter. And together with her friends Mulcahy raises money for the shelter with a lemonade stand. "It's simple," she says. "Drink lemonade and help animals."

The work has also affected many of the students' buying choices. "Now before I eat or drink anything, I always read the label and make sure there's no palm oil," Millward says. "It's not okay to be using it when we don't really need it, and it's more helpful for the orangutans to keep the forest whole."

Mulcahy too has stopped eating many things that contain palm oil to help orangutans. But, she admits, "giving up some foods, like Oreos, is hard."

Alan Knight, chief executive officer of International Animal Rescue, is encouraged by the students' efforts. "The fact that Budi's story has inspired the creation of such a wonderful book gives me real confidence for the future," he writes in the afterword.

Laurel Neme is a freelance writer and author of Animal Investigators: How the World's First Wildlife Forensics Lab is Solving Crimes and Saving Endangered Species and Orangutan Houdini. Follow her on Twitter and Facebook.

This article was originally published on National Geographic under the title "Schoolkids Write Adorable Book About Orphaned Orangutan" It is republished here with permission. For full article, please click here.