Cupcakes. Every single day during Paula Reynolds' first few weeks as a physical education teacher at Theodore Roosevelt Elementary School in Indio, California, she couldn't believe how often students were digging into the sugary treats.

The cupcakes arrived so frequently that they couldn't be called treats. Between birthday and other celebrations, cupcakes were practically becoming staples in the students' diets.

It may seem like a small thing, but every big change starts somewhere. And the abundance of cupcakes is what fueled Reynolds' desire to implement a health makeover at her campus.

Administrators already were interested in the Healthy Schools Program offered by the Alliance for a Healthier Generation, an organization founded by my organization, the American Heart Association, and the Clinton Foundation. Reynolds led the way, taking smart steps such as:

And, of course, birthdays are celebrated quite differently.

"Now the kids get just as excited for fruit trays as they used to for cupcakes," she said. "It's really amazing." 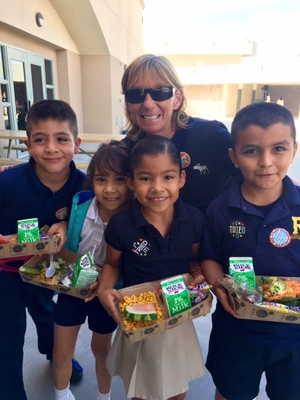 Roosevelt's overhaul has grown year by year, as has its recognition from the Alliance for a Healthier Generation. After earning National Healthy Schools Bronze status in Year 1, then Silver in Year 2, the school climbed to the top spot in Year 3 -- last year -- earning Gold. Roosevelt was among just 14 schools nationwide to reach that plateau.

With a new school year under way, I caught up with Reynolds on the first day of classes to learn more about this incredible -- and incredibly quick -- transformation.

Reynolds learned about the Healthy Schools Program before she was hired. So when Principal Clayton Hill mentioned wanting to launch it, she was ready to go.

While working at a middle school near Palm Springs, Reynolds implemented a program that got every student to be physically active for 30 minutes per day, five days a week, over a 30-day period. The reward: a $100,000 fitness center.

At Roosevelt, her first step was creating a School Wellness Council. The group evaluated the school's way of doing things and found a lot of quick fixes. That's a nice way of saying they recognized lots of unhealthy habits. For instance:

"You don't realize you are doing things wrong until you go through the guidelines for the Alliance and take a deep look at your systems," Reynolds said. "Once you take a look, you think, `That's terrible.'"

Cancelling cupcakes prompted pushback from parents. Some parents tried sneaking in the treats. Then the school put a list of alternatives on its website. The next year, they talked about it at the back-to-school night.

"The whole climate changed," she said. "Parents got on board."

The turnaround at Roosevelt began with canceling the cookie dough sales. They found healthier alternatives -- like a jogathon that raised about $6,000 -- and silly ones, like selling strips of duct tape to pin the principal to a wall; that brought in $400. 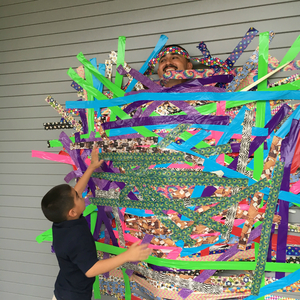 Instead of buying nachos, kids could buy their way around the dress code, such as $1 to wear jeans on Friday or buying a particular T-shirt.

They also started a dance, a first for Roosevelt and a great way to get kids moving for a few hours. All that gyrating makes you thirsty, so the school sold bottled water.

Holiday celebrations got a new look, too.

Instead of candy canes at Christmas, students only send notes. For Valentine's Day, chocolate kisses gave way to pencils.

"The first year, they didn't like it," Reynolds said, laughing. "But they realized they couldn't give anything sweet and they wanted to send something to their friends."

The internal evaluation also revived efforts to make health part of the curriculum. This led to a nifty discovery.

"The principal and I went into our storage room to see what materials we might have and we found a brand-new set of books that were only about a year old!" Reynolds said. "Someone ordered them and then just put them in a cabinet. Every grade level had a set, plus workbooks."

They also began using materials from the California Dairy Council.

Soon, students were learning how to read food labels and doing homework assignments such as going grocery shopping with their parents and having dinner-time discussions about what they were eating.

Meanwhile, the school was looking to get more out of the time set aside for computer labs. Originally a rare opportunity to use a computer, the classes were less focused now that every classroom has machines.

Someone came up with the idea of using an online health program.

"Once a week, they came in for a 40-minute interactive e-learning lesson," Reynolds said. "The kids loved it."

Then there was the cafeteria.

The big change, though, involved salad.

"They used to serve it a square package of shredded lettuce in cellophane," Reynolds said. "It would go straight to trash. They'd serve baby carrots in little plastic bags. Kids wouldn't even bother to open it."

The district's Nutrition Services came the rescue with a fresh salad bar. 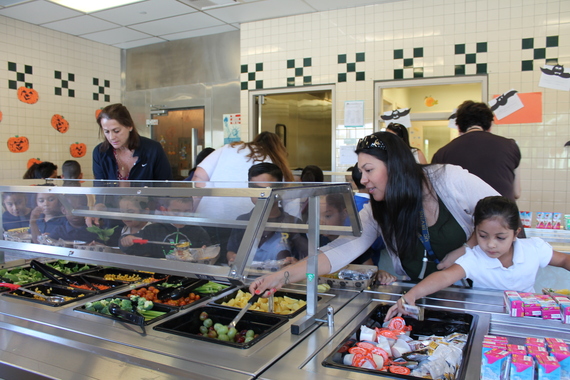 "The cafeteria staff encourages students to try things they haven't. Blood oranges went over big simply because of their name," Reynolds said. "Kids can pick whatever they want, but we had to institute a two-scoop limit because the younger kids were loading up on their favorites and some things were gone by the time the fifth-graders got there."

Another overhaul was perhaps the most obvious and most logical ...

California schools are required to offer 120 minutes of PE over two weeks. Roosevelt went all the way to 300. Under the leadership of a new principal, Daniel Martinez, the school day was tweaked to reach that level with only a minimal impact on instructional time. 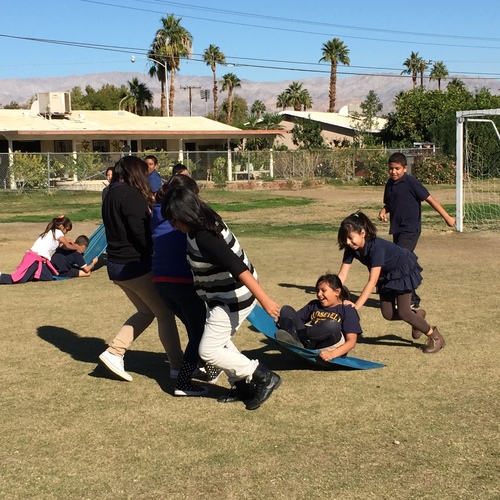 Requiring kids to do more physical activity, and do it more often, paid immediate dividends.

"When you're only doing it once a week, it's easier to pull back and hide, but when you're doing it three times a week you have to become involved," she said. "I could see those kids become more comfortable with moving and with their bodies. And they could see the changes in themselves, which helped with their self-esteem."

The best example is a boy named John.

John was a third-grader when Roosevelt began its health push and was in fourth grade when the PE time was expanded. He also was obese.

He tried hiding his body by wearing the same hooded sweatshirt every day. This is especially significant because Roosevelt is located in the Coachella Valley of Southern California. That's the desert.

"Even when it was 110 and 120 degrees he'd wear his sweatshirt outside to PE," Reynolds said.

As the PE minutes went up, John began thinning out. Early in fifth grade, he shed the sweatshirt. He also signed up for a flag football team.

And there was this: In fourth grade, John passed one of six fitness tests. In fifth grade, he passed them all.

As Roosevelt begins its fourth year working with the Alliance, kids run a warmup lap at the start of PE without even being told. They carry water bottles instead sipping sodas.

This story could go on and on with anecdotes such as those ... or with details of their fabulous running/walking club ... or perhaps about the new after-school athletic programs.

Instead, I'd like to bring it back to what a radical shift this is.

Roosevelt is located in an area of high poverty and high obesity, problems that are often linked. This story shows it doesn't have to be that way. 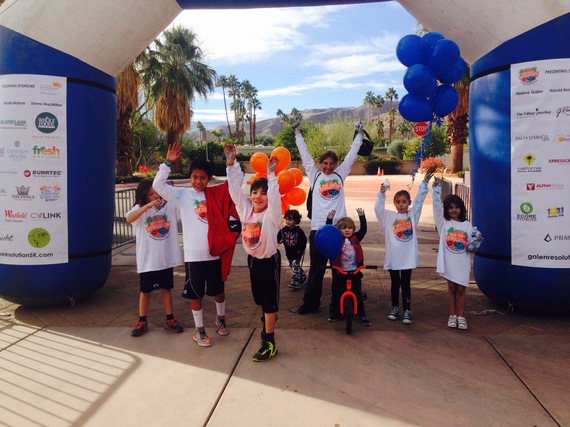