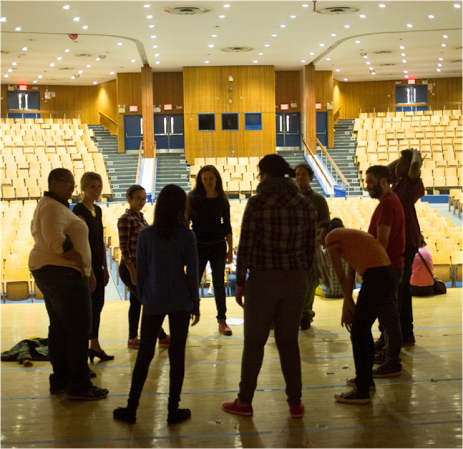 Few individuals over the age of thirty could ever have imagined the reality confronting so many young people today: a world fraught with insecurity about the future, violence at school (and frequently at home), gangs, guns, the lure of ever more potent and dangerous drugs, and peer pressure that demands that one both conform and stand out from the crowd. For too many, the response is anxiety, depression, and, in the worst cases, self-harm and suicide. To anyone observing the modern physical and virtual landscape young people occupy, it is clear that now, more than ever, students need the time and space to stop, think, and reboot.

One organization helping them do so is ENACT, founded by Diana Feldman, a licensed drama therapist. More than 25 years ago Ms. Feldman developed an innovative methodology using professional actors to engage students directly in the classroom. Trained extensively in the ENACT method, actors create a "safe container" for students, many of whom are recruited for the program because of behavioral or truancy issues that are threatening to derail their academic careers. Over a period of up to thirty weeks, the actors present carefully customized scenes of real-life conflict, unveiled at the pace and readiness of the audience.

ENACT resonates with the more than 2,000 students it reaches each year because its curriculum and scene work reflect real-world experiences. Scenes and role-play are "ripped from the headlines," as it were, but supervision by licensed clinicians assures that issues are approached in the safest and most therapeutic fashion.

"Safe distance" is the phrase Ms. Feldman uses to explain this approach, meaning that students can identify with the issue or scenario being enacted in the classroom, but no student feels that his or her issue is being singled out or put on display. "Kids have told us time and again that we 'get' where they are coming from," said Ms. Feldman, "but they like that we don't preach."

As Cristina Hernandez, an ENACT site director at a Bronx middle school puts it, "humor goes a long way, as audiences universally love laughing at bad behavior. Initially, kids can point their fingers at the actors and make fun of all the 'mistakes' they are making as they [intentionally] fumble in their attempts to negotiate conflict."

Ms. Hernandez described the way ENACT teaching artists help students break down each scene through facilitated discussions about what is taking place on the classroom's "stage." "Over time, students begin to recognize the way the scenes ring true in their own lives. We then let them take the stage and give them the tools they need to rehearse healthier, happier outcomes."

ENACT is currently working in more than 50 schools and alternate learning centers around the city, and I asked Ms. Feldman what some of the more prevalent issues seem to be. She did not hesitate. "Bullying is something that crisscrosses all social, economic and class terrains and can be as devastating in adulthood as it is in childhood."

As someone who was bullied as a child, and who has seen the effects of bullying on children close to me, I know how insidious it can be. Starting as an unkind word here, a physical aggression there, its progress is iterative, emboldening and empowering the aggressor, eroding the target's emotional center and destroying fragile social bonds.

"Sadly, bullying has taken over as large a place in cyberspace as it once did on the playground, with almost mythic ramifications," Ms. Feldman pointed out. "We actually wrote a short one-act play around it because of the enormity of the issue, and schools grappling with it now ask us to present it to their students with a very focused, facilitated discussion."

While bullying can target anyone and can even seem randomly assigned at times, it is particularly devastating for English language learners and students presenting as LGBTQ. "I have heard stories from our social workers that would absolutely break your heart," she said. "We must address this issue in all its guises. Whether it's bullying or any of the other myriad issues we work on, every time one of our students can put himself or herself into the role of the 'other,' we are breaking down barriers."

By all accounts, ENACT is working. A four-year study completed by Columbia University in 2011 concluded that, across the board, ENACT students improve significantly in levels of verbal and non-verbal expression, demonstrations of trust, focus, engagement, and collaboration and cooperation with other students and adults. Researchers found that "the self-knowledge and understanding of others became actualized in the ENACT scene work." Teachers report dramatic and consistent improvements in classroom behavior and principals have documented improvements in attendance, grades and test scores.

In addition to weekly workshops with teaching artists, ENACT's Safe Haven program "embeds" itself in a school. What this means is that ENACT social workers and drama therapists become part of the fabric of the school, providing individual and small group counseling, serving on school leadership committees, and even doing home visits to parents and guardians. Jeffrey Chetriko, a principal in Harlem who has hosted ENACT's Safe Haven program in his school since the fall of 2014, has seen a 73% decrease in behavioral "incidents" that he must file. "My teachers love ENACT, not only for what they are doing for our kids, but for the practical professional development they provide."

"Schools like us because when we help students find their authentic voice, it's a win win for all involved," said Ms. Feldman. "Teachers report calmer classrooms, students start attending classes and disciplinary problems begin to abate."

But, she continued, the real champions are the students themselves. "When kids recognize that they are playing a starring role in the circumstances of their life, they begin to think seriously about how they want to develop and shape their story."