For Cy Gavin, this summer is merely a break from school. The Pittsburgh born artist received his BFA from Carnegie Mellon University in 2007, before joining the MFA program at Columbia University. His debut solo show at Sargent's Daughters is definitely worth a visit. 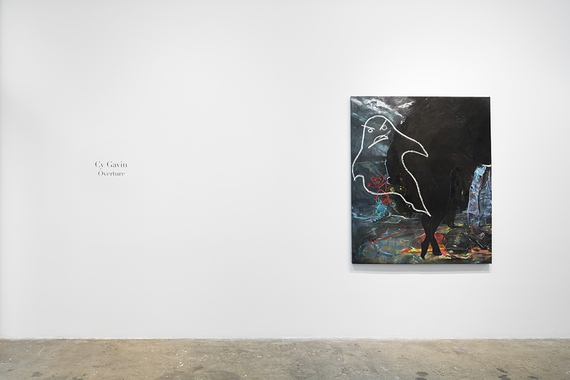 After getting distracted by the Lower East Side's eclectic horde of food and fashion, I made it to the gallery shortly after its 6 o'clock opening. The space was already bustling with emerging-art-enthusiasts and free-wine-opportunists alike, drawn in by the artist's own ambitious assortment of abstract, landscape and figurative works of art. Deeply personal to the artist, the show's thesis, reassured by a lengthy gallery press release, surrounds the idea of collective identity among African Americans as well as an individual one. Sparked by the sudden death of his father after a "consistently bellicose" relationship, Gavin burrowed into the lack of documentation of his ancestry and became absorbed with constructing an account from the spectral and shadowy years behind him.

In addition to the complex family relationships, the writings of W.E.B Du Bois, and specifically the "double consciousness" of black American lives that he writes about in The Souls of Black Folk, are of great importance to the artist's practice. Gavin represents this double consciousness through two motifs: a ghost and a black figure.

"One ever feels his two-ness, - an American, a Negro; two souls, two thoughts, two unreconciled strivings; two warring ideals in one dark body, whose dogged strength alone keeps it from being torn asunder."

There are twelve works in the show, but one piece was particularly powerful. It includes just one of the two symbols that Gavin uses to represent his thesis: a dense black silhouette of a lone male figure. The opacity of the figure (created through his own medium of tattoo ink, umber and translucent blue) forms a deep void in many of the show's works; a figure both being absorbed and being isolated by the surrounding vibrancy. 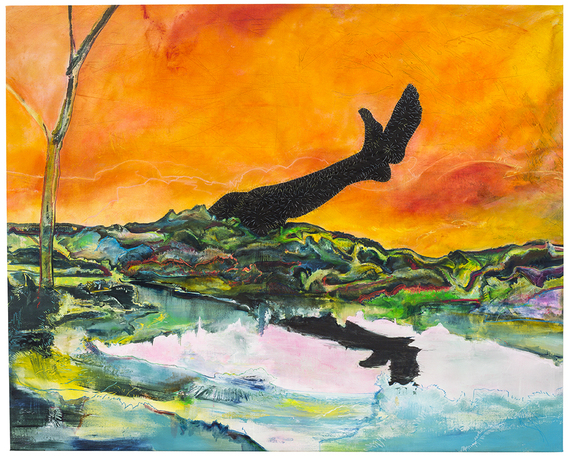 Spittal Pond, Bermuda (2015) captures the mesmerizing atmosphere of a lagoon landscape with banks of luscious multi-colored vegetation. Gavin invites us to marvel at his play of color and texture; fiery orange-red paint of the sky dominate the top half of the composition while the contrasting cool blue and pink hues of the water dominate the bottom, creating a notion of transience, the space between reality and the imaginary. The various greens of the vegetation are intermingled with chalk, oil and acrylic streaks of yellows, reds and purples. An enigmatic inverted universe sweeps out towards us in the bottom half of the composition, reflecting an appropriately abstract concoction of light and color as well adding to the dreamlike quality of the painting's main feature: a pair of deep black silhouetted legs protruding into the sky from the horizon.

It is this dense abyss of legs, here, and in a number of the other works, that prompted me to write about this show. The distorted reflection and oversized protruding legs, at once in motion and stagnant, immediately turned something in my stomach. While touching upon a whole plethora of artists' techniques and styles through the last century, Gavin creates a painterly fantasy in which all sense of depth and surface, scale and proximity, materiality and illusion is denied. What effect does the black figure add to this work? What emotional reaction does it provoke? Like in many of the works, such as Emissary (2015), the figure (or, in this case, the legs) is supine or floating, creating an appearance of weightlessness and uncertainty. Aggressively punctured by hundreds of staples ("a reference to the Nkisi Nkondi--spirit vessels of the Kongo peoples into which nails are driven"), the figure is sinister and threatening - these are not the legs of someone frolicking playfully in the grass. Yet this figure bears a much greater weight than just the artist's personal manifestation and, somehow, engages the universal crowd to which it has been presented. Further than this, in a number of works in the show, the surface of the paintings have been scratched away which is Gavin both reference the erasure of African cultures in America's history while at the same time challenging ideas of a mandatory assimilation to Western ideologies. 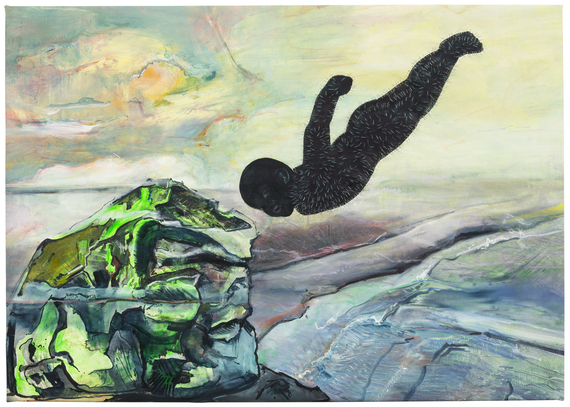 Cy Gavin has a style that is young, but assured. Visually, his paintings capture artistic effects similar to those of Peter Doig, in their spectacularly colorful, painterly compositions that fall in and out of focus, and Gerhard Richter, in its striking ability to manipulate colors and traditional techniques. Yet, Gavin is able to create something distinctive. After a number of years of heavily abstract and minimalist artworks saturating the emerging market, we are now seeing more and more figurative works. This young artist in particular has found a distinctive and powerful way in which to convey his message of both his place in society as well as African Americans as a whole. Check it out before it closes.