UPDATE: Gov. Schwarzenegger has denied that he intentionally sent an obscene message to lawmakers. The Governor claimed it was one of those "wild coincidences." Details here.

SACRAMENTO, Calif. -- Gov. Arnold Schwarzenegger typically attaches a message to bills he signs or vetoes telling lawmakers why he took the action.

A Democratic assemblyman who heckled the governor during a recent event in San Francisco actually received two messages: the veto letter itself and a not-so-subtle rebuke creatively hidden within it.

Like a find-the-word puzzle, the second message was visible by stringing together the first letter of each line down the left-hand margin. It consisted of a common four-letter vulgarity followed by the letters "y-o-u."

"My goodness. What a coincidence," said Schwarzenegger spokesman Aaron McLear. "I suppose when you do so many vetoes, something like this is bound to happen."

Schwarzenegger's veto messages are sent to the lawmakers who authored the bills, and posted on the governor's Web site. McLear noted that the left-hand margin of past veto messages has spelled out words such as "poet" and "soap."

The target was San Francisco Assemblyman Tom Ammiano, who had sponsored AB1176. The bill, which passed unanimously in the Assembly and Senate, would have granted the Port of San Francisco expanded financing power to redevelop a former shipyard into a new neighborhood known as Pier 70.

"Kudos to the governor for his creative use of coincidence," said Ammiano's spokesman, Quintin Mecke. "You certainly have to have a sense of humor in politics. Unfortunately, this humor came at the cost of the Port of San Francisco."

Whether coincidence or smackdown, the phrase contained in Schwarzenegger's Oct. 12 veto message could be seen as retaliation for Ammiano's behavior during a local Democratic Party fundraiser earlier this month in San Francisco.Story continues below

Schwarzenegger, a Republican, had been invited to the event by former San Francisco mayor and Assembly speaker Willie Brown, a Democrat.

His appearance at the Fairmont Hotel caught many of the attendees by surprise and came after a summer of contentious budget negotiations that forced lawmakers to cut billions of dollars from core state services, including education and health care programs.

On a video clip of the governor's appearance, Ammiano can be heard shouting "you lie" and other derogatory phrases as other attendees booed and heckled Schwarzenegger's brief speech.

After the governor left, Ammiano took the stage and gave a rambling diatribe in which he criticized Schwarzenegger for a wide variety of perceived offenses. In part, the freshman lawmaker was upset that Schwarzenegger had vetoed bills in 2005 and 2007 that would have legalized gay marriage.

The governor has said the issue should be decided by voters or the state Supreme Court. Schwarzenegger also opposed Proposition 8, the initiative voters passed in November to ban same-sex marriage.

Of the eight Ammiano bills sent to the governor's desk this year, Schwarzenegger vetoed six -- five of them after the Oct. 7 heckling incident.

Mecke, Ammiano's spokesman, said the lawmaker wants to move on.

"We will call it even and start with a clean slate with the governor from here on out," he said. 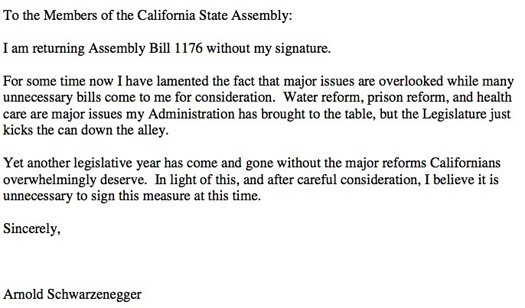