Now that Washington has ruled out an immediate bailout for California, we know who will pay the ultimate price for the crisis born on Wall Street: the state's most vulnerable citizens. And with many states facing similar crises, this could be a preview of where the country as a whole is headed. California is facing a $24.3 billion dollar budget gap, and the governor wants to attack it with cuts to social programs alone. If Schwarzenegger has his way, the price will be paid by 1.9 million people who lose their health care coverage, 1.3 million who lose basic welfare, thousands of state workers who get fired, schools that lose $5 billion in funding, having already survived brutal cuts earlier this year. 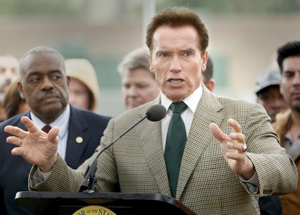 I just spent a week in LA and Sacramento filming a documentary on the crisis for Fault Lines, the show I co-host on Al Jazeera English Television. We interviewed teachers who are on hunger strike against the cuts, students organizing protest marches, health care workers and their patients, politicians from both parties, undocumented immigrants and the talk show hosts who demonize them (Californians will know the John and Ken Show...) What we discovered (beyond some priceless video of Arnold Schwarzenegger introducing Milton Friedman's TV series on PBS in 1990, is that thanks to the quirks of California's system, the state is a Petri dish for some of the most virulent strains of American political culture.

Around the world, government is seen as the last hope to stimulate a comatose economy. In California, anti-tax, anti-spending, and anti-government sentiments are converging: California is facing a de-stimulus package of epic proportions. Watch both parts of my half-hour documentary below, and check out AJE live, 24 hours day, at livestation.com.