More than 60 researchers and technologists are running for federal office in 2018 as part of a historic wave of candidates with science backgrounds launching campaigns.

At least 200 candidates with previous careers in science, technology, engineering and math announced bids for some of the nation’s roughly 7,000 state legislature seats as of Jan. 31, according to data that 314 Action, a political action committee, shared exclusively with HuffPost.

The group, which launched in 2014 to help scientists run for office, said it is talking with 500 more people and is pressing about half of them to run. An additional 200 such candidates are running for school boards.

The surge in congressional bids comes as scientists are experiencing a fierce political backlash. A year into his first term, President Donald Trump has yet to name a science adviser and has proposed dramatically slashing research budgets across federal agencies. He openly mocks the widely accepted science behind global warming and has nominated ardent climate deniers to key environmental positions. Under Environmental Protection Agency Administrator Scott Pruitt, the White House has reversed regulations to reduce greenhouse gases and put new rules in place to give control of the agency’s science advisory boards to researchers paid by industries.

The so-called war on science is being waged in Congress, too. Under the leadership of Rep. Lamar Smith (R-Texas), a virulent climate change denier and fossil fuel ally, the House Committee on Science, Space and Technology has mounted repeated “witch hunts” to tarnish the credibility of scientists, leading some to call it the “House (anti)science panel.”

“The attacks on science, of course, didn’t start with the Trump administration, but it has been a catalyst to getting scientists out of the lab and into running for federal office,” Naughton said. “That is one bright spot.”

This weekend, 314 Action plans to announce its support for two new candidates running for the House of Representatives, bringing its total endorsements to 16.

The group is backing Brian Forde, a former senior technology adviser in the Obama administration, in his bid to unseat Rep. Mimi Walters. The Orange County Republican, who has served two terms from California’s 45th Congressional District, so routinely votes against climate change legislation that she has a paltry 4 percent lifetime score on the League of Conservation Voters’ ranking.

“She’s voting for herself to rise up in leadership, she’s not voting for her constituents,” Forde, who led a climate data initiative under President Barack Obama, told HuffPost by phone Friday.

These are people that are genuinely outraged and concerned by the direction the country is going in, especially in this administration and this Congress. Shaughnessy Naughton, 314 Action founder

“I grew up in this district. This is where I won the local science fair in fifth grade. This is where I learned how to code and build a computer,” he added. “This is one of the most highly educated districts in the country.”

314 Action is also endorsing Suneel Gupta, a systems architect and former executive at Mozilla and Groupon, who is running for Michigan’s 11th District seat. His campaign bills him as the “first tech candidate in the industrial Midwest.”

He’s running to replace Rep. David Trott, a Republican attorney nicknamed the “foreclosure king” because he used to own one of the state’s largest “foreclosure mill” law firms. Trott, who said he would not run for reelection this year, has a 4 percent lifetime League of Conservation Voters score, and the crop of Republicans running to succeed him don’t seem poised to improve on that. At a Republican debate held last month, all six candidates answered no when asked 59 minutes in if they believed “in manmade climate change.”

“This is what we’re up against,” Gupta told HuffPost, adding that he wants to bring “evidence-based policy solutions into Congress.” “We don’t have enough of that now, and we need it now more than ever.”

314 Action is working with roughly 20 other federal campaigns and plans to endorse up to 10 more candidates before the election cycle is over. The group raised $207,157 and spent $223,159 in 2016, according to data collated by the Center for Responsive Politics. But the group said it raised $2 million in 2017, and is on track to bring in $5 million to $7 million throughout this election cycle.

“These are not people that envision themselves as politicians and build a résumé around that,” Naughton said. “These are people that are genuinely outraged and concerned by the direction the country is going in, especially in this administration and this Congress.”

“It seems that time has really come,” she added. “I find that really encouraging.”

This story was updated with 314 Action’s latest fundraising numbers.

The Largest Number Of Scientists In Modern U.S. History Are Running For Office In 2018
March For Science Kids 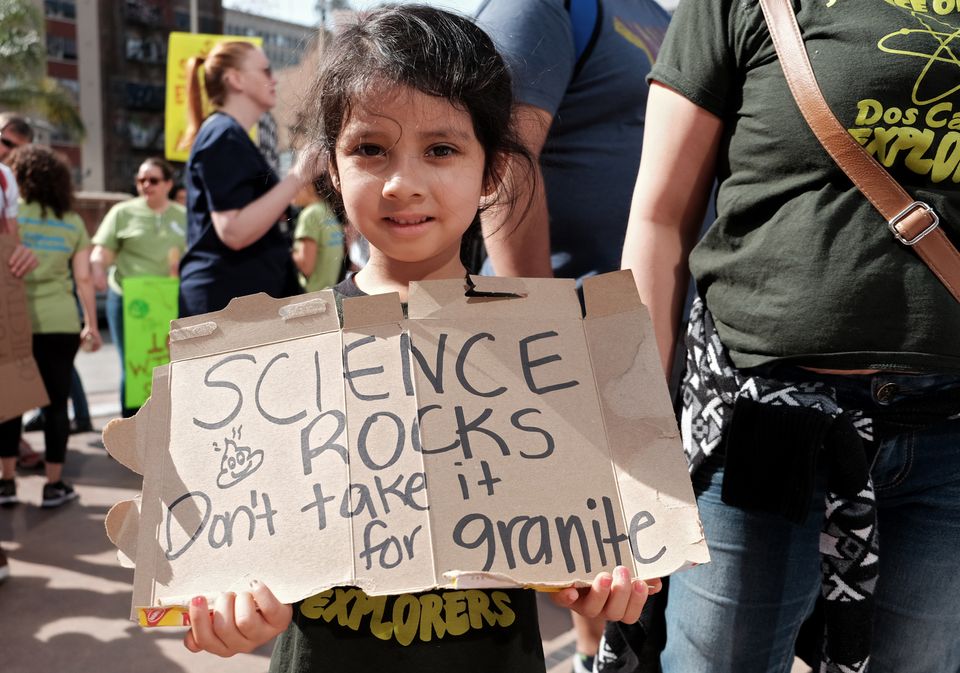 1 / 20
A young girl marches with scientists and supporters in a March for Science on April 22, 2017 in Los Angeles, California. (Photo by Sarah Morris/Getty Images)
Sarah Morris via Getty Images