As the World Science Festival kicks off in New York City this month, the art and technology gallery Eyebeam is bringing art and science together for their new summer exhibit, 'Surface Tension: The Future of Water.'

Upon walking into the gallery, visitors are immediately faced with hypnotic, large-scale installations and the constant sounds of water across the space. Projects are mounted on walls, suspended like mobiles from the ceiling, and tucked away in hidden, dark corners. Ranging from maps to instruments, films to laboratories, pumps to prisms, it's a mesmerizing homage to water's essence. Plentiful as it seems to be, flowing through massive waterways and raining down upon urban centers, the actual availability of drinkable water is a dwindling reality in light of world population growth. The exhibit is meant to engage lovers of science and art in a global phenomenon of ever-increasing importance -– the idea that water must be managed in order to remain sustainable. 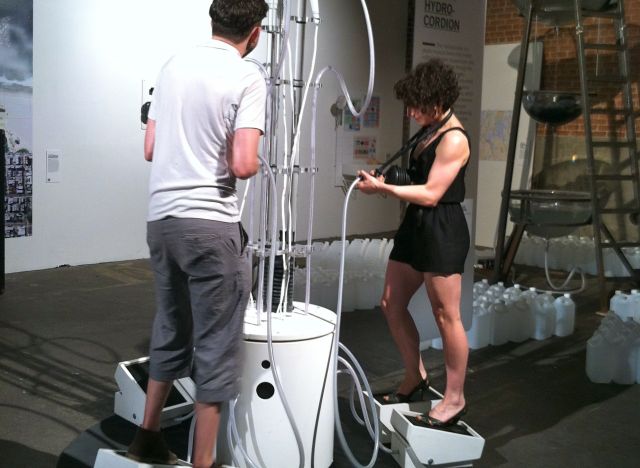 Some artists and designers approach the idea of water's future from a playful perspective. Hydrocordion, a musical device constructed by artist Di Mainstone, Louis McCallum and other designers, is a complex water organ that invites visitors to become "squeezicians." Reminiscent of a Rube Goldberg invention, the transparent pipes filled with water move up and down as visitors simultaneously perform a "slipper-jig" on foot pedals and play a water-belly attachment like an accordion. It's a physical and auditory experience for jiggers and passer-by alike. As Mainstone explained at the exhibition, "I modeled it after a village well, like the one in my mum and dad's village. I wanted people to have to input energy in the same way for this project."

Other artists highlight the pure scientific mystery behind water. "Hydrogeny," a project created by artists Eveline Domnitch and Dmitry Gelfand, celebrates the atomic wonder that is hydrogen. It consists of a transparent glass tank filled with water and equipped with electrodes that is continuously illuminated by a spectrum of colors emanating from a laser positioned a few feet away. The electromagnetic treatment transforms the glass tank into a window to some distant universe, as the viewer looks out onto a constellation of dancing particles and flickering colors. Peering into the water tank we asked the two artists if the liquid was just water, to which Dmitry quickly replied, "Water is never just water. It's never just H20." Evelina went on to explain the phenomenal features of the complicated molecule that makes up water. "In three weeks, life starts emerging in the tank similar to how life first emerged on earth, through sunlight interacting with water in the seas and oceans."

Still from Fergal McCarthy's The Swimmer.

A few of the exhibits are more didactic, like Lane Hall and Lisa Moline's "Basin," which depicts a simple flow chart of water politics, or Matthew Laws and Hal Watts' "Urban Water Needs," that consists of a topographical map made out of used sponges. But other projects have abandoned the typical visual aids used in mapping the role of resources. One in particular is Fergal McCarthy's reimagination of the 1968 Burt Lancaster film The Swimmer. Also called The Swimmer, the newer film follows artist McCarthy's swim through Dublin's public and private waterways, elegantly cutting a new map of the city as he maneuvers through swimming pools and rivers to get from one end of the metropolis to the other.

There is a clear connection between technological advancement and the future of water throughout the exhibits, a partnership that is conveyed in both unity and tension. Artist Julius Popp showcases a giant waterfall of text titled BIT.FALL, that supplies tranquil soundscapes by representing computer-generated texts through a stream of water droplets acting like pixels. Yet while the installation is a fete in water-text, it seems more illustrative of the fleeting nature of information rather than the pressing nature of water scarcity.

Like Popp, most of the artists share a background in the hard sciences, such as curator Ralph Borland, an artist and designer who recently completed a PhD in engineering. As a result, some of the installations rely more on higher-tech mechanisms to create visually appealing demonstrations of water's capacities, rather than using ready-made or used material to create compelling installations that are less directly educational and more abstractly meaningful. The "Protei 002" project seems to skirt this approach, creating DIY sailboats that could potentially be used to clean oil spills, which remains a functional design rather than a truly provocative piece.

The message of water's paradoxical existence is undoubtedly and imaginatively conveyed though, and the interwoven community of scientists and artists does its best to eliminate the imagined divide between the disciplines, providing an interactive space for visitors and designers to explore their liquiphile interests. In this way, "Surface Tension" transcends the typical gallery-walk, making for a genuinely enjoyable viewing experience.

"Surface Tension," which originated at Science Gallery in Dublin, opened May 30th at Eyebeam in New York and will be on display until August 11, 2012.

Check out a slideshow of images of the water-themed projects below. 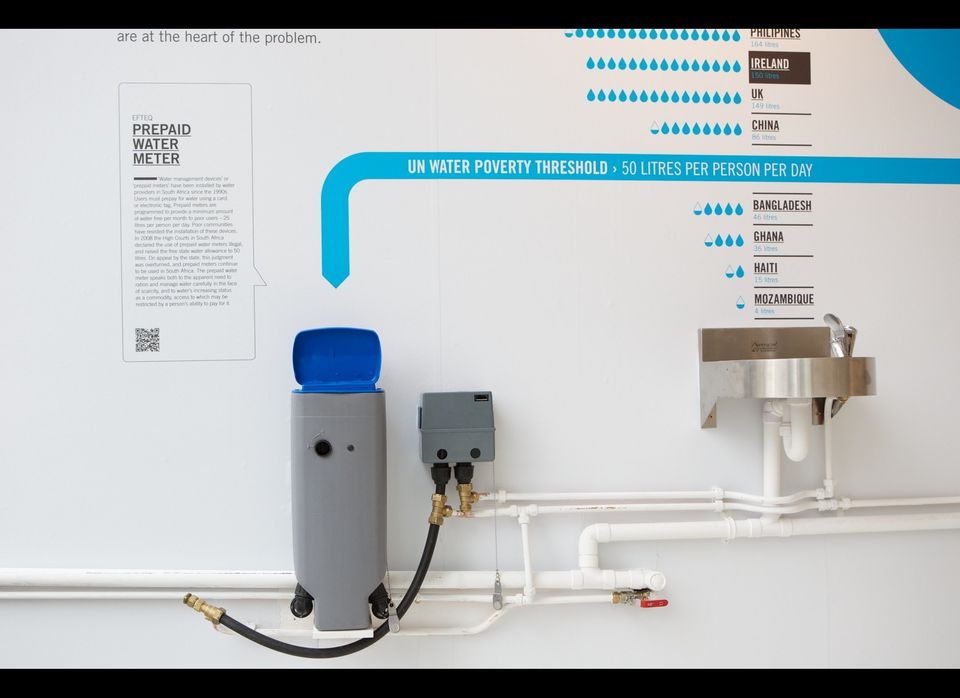