Many scholars of Renaissance art tell us that Botticelli's Birth of Venus (c. 1486, pictured above) captures the tension between the celestial perfection of divine beauty and its flawed earthly manifestation. As classical ideas blossomed anew in 15th-century Florence, Botticelli could not have missed the popular Neoplatonic notion that contemplating earthly beauty teaches us about the divine.

Evolutionary biologists aren't all that Neoplatonic. Like most scientists, we've long stopped contemplating the celestial, having -- to appropriate Laplace's immortal words to Napoleon -- "no need of that hypothesis." It is the messy imperfection of the real world that interests us on its own terms.

My own specialty concerns the messy conflicts that inhere to love, sex and beauty. Attempts to cultivate a simple understanding of beauty -- one that can fill a 200-word magazine ad promoting age-reversing snake oil, for example -- tend to consistently come up short.

Nowhere does the barren distinction between biology and culture grow more physically obvious than in the discussion of women's body shapes and attractiveness. The biological study of body shape has, for two decades, been preoccupied with the ratio of waist to hip circumference.

With clever experimental manipulations of line drawings, Devendra Singh famously demonstrated that images of women with waists 70% as big as their hips tend to be most attractive. This 0.7:1 waist-to-hip ratio (WHR), it turns out, also reflects a distribution of abdominal fat associated with good health and fertility.

Singh also showed that Miss America pageant winners and Playboy playmates tended to have a WHR of 0.7 despite changes in the general slenderness of these two samples of women thought to embody American beauty ideals.

Singh's experiments were repeated in a variety of countries and societies that differ in both average body shape and apparent ideals. The results weren't unanimous, but a waist-to-hip ratio of 0.7 came up as most attractive more often than not. The idea of an optimal ratio is so appealing in its simplicity that it became a staple factoid for magazines such as Cosmo.

There's plenty to argue about with waist-hip ratio research. Some researchers have found that other indices, like Body Mass Index (BMI) explain body attractiveness more effectively.

But others reject the reductionism of measures like WHR and BMI altogether. This rejection reaches its extremes in the notion that ideas of body attractiveness are entirely culturally constructed and arbitrary. Or, more sinisterly, designed by our capitalist overlords in the diet industry to be inherently unattainable.

The evidence? The observation that women's bodies differ, on average, between places or times. That's the idea animating the following video, long on production values, short on scholarship and truly astronomic on the number of hits (21 million-plus at the time of writing):

This rather questionable video, called 'Women's Ideal Body Types Throughout History,' is getting a lot of airplay on YouTube.

I note that Botticelli's Venus looks more at home in the 20th Century than among the more full-figured Renaissance "ideals." So do the Goddesses and Graces in La Primavera. Perhaps there was room for more than one kind of attractive body in the Florentine Renaissance? Or is the relationship between attractiveness and body shape less changeable and more variegated than videos like the one above would have us believe?

Not that I'm down on body shape diversity. Despite the fact that there seems to be only one way to make a supermodel, real women differ dramatically and quite different body types can be equally attractive. The science of attractiveness must grapple with variation, both within societies and among cultures.

For some years our research group has wrestled with exactly these issues, and with the fact that bodies vary in so many more dimensions than just their waists and their hips. To that end, we established the BodyLab project, a "digital ecosystem" in which people from all over the internet rate the attractiveness of curious-looking bodies like the male example below. 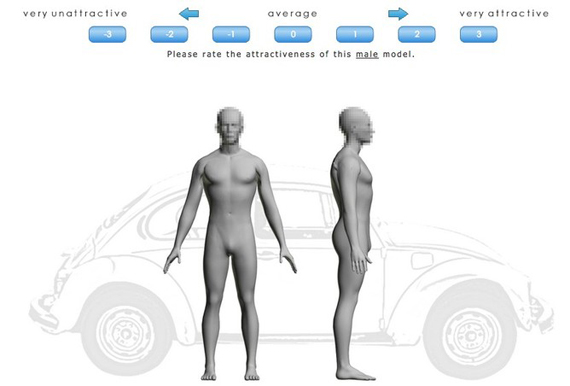 Example image from the BodyLab 'digital ecosystem.' The VW Beetle is provided as the universal symbol of something-slightly-shorter-than-an-adult-human. Faces pixellated to preserve any grey people's anonymity. (Rob Brooks/BodyLab.biz)

We call it a "digital ecosystem" not to maximize pretentiousness, but because this experiment involved multiple generations of selection and evolution. We started with measurements of 20 American women, a sample representing a wide variety of body shapes.

We then "mutated" those measures, adding or subtracting small amounts of random variation to each of 24 traits. Taking these newly mutated measures we built digital bodies, giving them an attractive middle-grey skin tone in an attempt to keep variation in skin color, texture etc. out of the already complex story.

If you want to help out with our second study, on male bodies, visit BodyLab and click through to Body Shape Study and then Rate Males (Generation 6).

This all involved considerable technologic innovation, resulting in an experiment unlike any other. We had a population of bodies (120 per generation) that we could select after a few thousand people had rated them for attractiveness. We then "bred" from the most attractive half of all models and released the new generation into the digital ecosystem.

What did we find? In a paper just published at Evolution & Human Behavior, the most dramatic result was that the average model became more slender with each generation. Almost every measure of girth decreased dramatically, whereas legs and arms evolved to be longer. 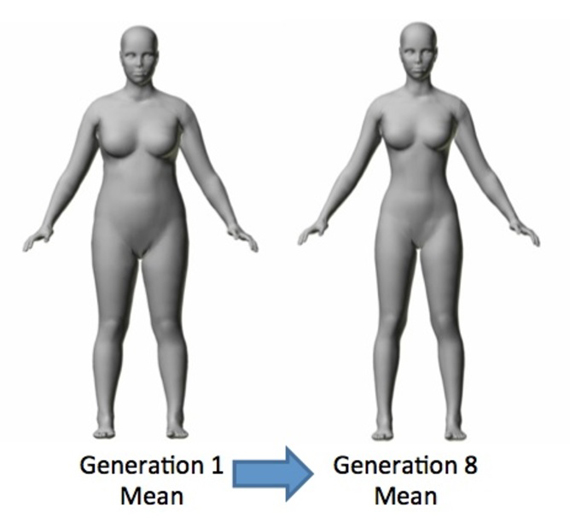 That may not seem surprising, particularly because the families "bred" from the most overweight individuals at the start of the experiment were eliminated in the first few generations.

But, after that, more families remained in the digital ecosystem -- surviving generation after generation of selection -- than we would have expected if there was a single most attractive body type. The Darwinian process we imposed on our bodies had started acting on the mutations we added during the breeding process.

More meaningful than the mean

Those "mutations" that we introduced allowed bodies to evolve free from all the developmental constraints that apply to real-world bodies. For example, leg lengths could evolve independently of arm lengths. Waists could get smaller even as thighs got bigger.

When we examined those five families that lasted longest as our digital ecosystem evolved, we observed a couple of interesting nuances.

First, selection targeted waist size itself, rather than waist-hip ratio. No statistical model involving hip size (either on its own or in waist-hip ratio) could come close to explaining attractiveness as well as waist size alone. Our subjects liked the look of slender models with especially slender waists. There was nothing magical about a 0.7 waist-to-hip ratio.

Second, within attractive families, which were the more slender families to begin with, evolution bucked the population-wide trend. These bodies began evolving to be more shapely, with bigger busts and more substantial curves.

It turns out there's more than one way to make an attractive body, and those different body types evolve to be well-integrated. That's a liberating message for most of us: evolutionary biology has more to offer our understanding of diversity than the idea that only one "most attractive" body (or face, or personality) always wins out.

What about the cultural constructionists? Are body ideals arbitrary, or tools of the patriarchal-commercial complex?

Our results suggest that the similarities between places, and even between male and female raters, are pretty strong: the 60,000 or so people who viewed and rated our images held broadly similar ideas of what was hot and what was not. But their tastes weren't uniform. We think most individuals could see beauty in variety, if not in the full scope of diversity on offer.

What's cool about our evolving bodies, however, is that we can run the experiment again and again. We can do so with different groups of subjects, or even using the same subjects before and after they've experienced some kind of intervention (perhaps body-image consciousness-raising?). I'm hoping we can use them to look, in unprecedented depth, at the intricate ways in which experience, culture and biology interact.