Do you know why you eat?

We eat because we are hungry. We eat for energy. You might know some of the reasons we crave certain foods, but most of our food decisions come from hidden forces.

In fact, food psychologist Dr. Brian Wansink has found that we make more than 200 food decisions each day but we are unaware of 90 percent of them. Here at the Science of People, I like to explore the hidden forces that drive our behavior and in this post I want to talk about the science and psychology of eating.

Mindless Eating: Why We Eat More Than We Think by Brian Wansink, Ph.D. was our May Book Club book, and his research was fascinating. I am going to sum up the best parts for you in this article.

I want to convince you of this big idea:

The best diet is the one you don't know you're on.

If you understand the science of eating, you can reengineer the way you think about food and the way you diet-in other words, you shouldn't be on a diet at all.

Questions We Will Answer:

Okay, onto the science of food. 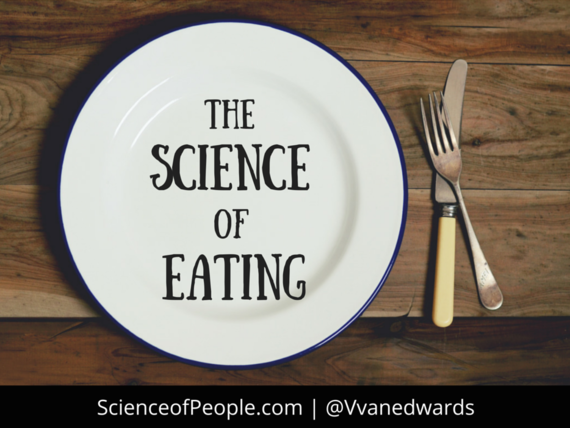 "Food is a great pleasure in our life -- not something we should compromise. We simply need to shift our surroundings to work with our lifestyle instead of against it" -- Brian Wansink

Don't ever let anyone tell you that food is the enemy. Food is and should be a pleasure. One of the scientific food principles that intrigued me most was the idea that we shouldn't restrict our eating.

Every diet ever tells you to cut out or eliminate certain foods. The diet tips we hear all the time:

Here's the problem: The moment we consciously deny ourselves something, the more we're likely to end up craving it more and more.

For example, I'm not a big meat eater. I happened to read the book Skinny Bitch a few years ago, which is a pro-vegan book. I am not kidding you, within 10 pages of learning that I should cut out animal products of all kinds I had the biggest craving for BBQ ribs. Before that moment, I had never in my life craved BBQ ribs until I was told I couldn't have them. This is incredibly common. Most people will tell you that they have something that they don't eat as a matter of principle (leaving aside food allergies of course). This sets you up for craving that exact food. Before we move onto the other science of eating tips:

One of my favorite food science studies has to do with wine -- also one of my favorite foods! In this study, researchers wanted to know if what you think about food effects how you eat. Researchers got $2 wine and put two different labels on them. One said the wine was from North Dakota and the other said the wine was from California. North Dakota is not exactly known for its vineyards, whereas California wine is known to be superb around the world. Researchers wanted to know if this thought expectation changed people's expectation of the taste. Sure enough, people who got the California wine said the wine tasted better AND the entire meal tasted better. People who got the North Dakota bottle rated the wine and the meal lower. This tells us that the power of thought is incredibly powerful. This is called:

This builds upon #2 with a slight twist. How your food is presented is just as important as how it tastes. In other words, presentation is everything. In one study, researchers gave brownies to three groups of participants. The brownies were exactly the same but presented in different ways:

The researchers then asked participants how much they would pay for each brownie.

Take the time to make your food look awesome. This is great for you and your dinner parties. I wasn't sure how powerful this principle would be until I did it myself. I went to Goodwill and got some beautiful serving platters and vases. I then switched my fruit (normally on the counter or in a plain wooden bowl) into these nice displays: 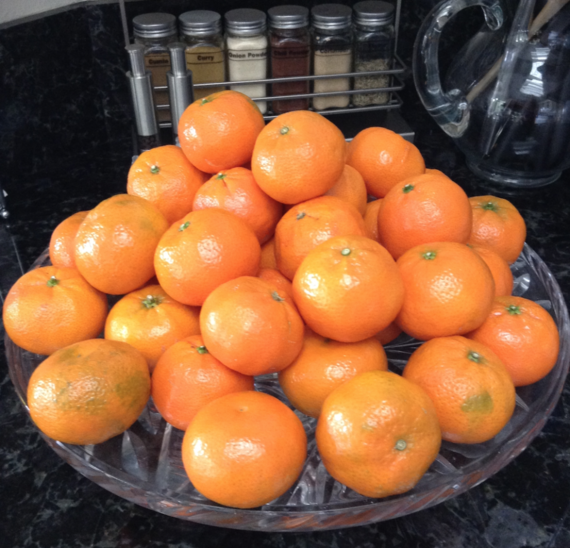 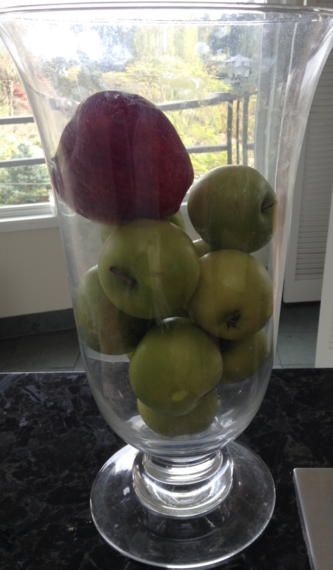 I'll be darned if that fruit doesn't disappear much quicker! Instead of ignoring the fruit completely, my husband and I have been gobbling them up. We also have people over all the time and I have noticed they are much more likely to grab a tangerine from my glass platter than when it was in the mesh bag it came in sitting on my counter!

Wansink explains something called "the mindless margin," which is a span of about 200 calories that can make the difference between gaining 10 pounds in a year (by eating 100 calories more a day) or losing 10 pounds in a year (by eating 100 calories less a day). The reason he calls it mindless is because your brain and body won't even notice that the 100 calories are missing. In fact, he says 20 percent is the magic number. Our brains and stomach don't notice if things are 20 percent smaller or 20 percent different -- 30 percent is too much and 10 percent doesn't cut enough for you to see a difference in weight.

Wansink found that when secretaries sit near clear dishes filled with Hershey's Kisses, they ate 71 percent more -- or 77 calories a day -- than those sitting near opaque dishes of Kisses. Over the course of a year this adds up to more than five pounds of extra weight. We eat what we see because if we walk by the kitchen without a craving but see a rolled up bag of chips, our brain triggers the salty, crunchy goodness and creates a craving.

One idea Wansink shares quite convincingly is the idea that convenience leads to consumption and distractions really can slow us down.

Some terrible person (my mother) sent me Easter candy. It was on my kitchen counter for not even 24 hours and before I realized it, this happened: 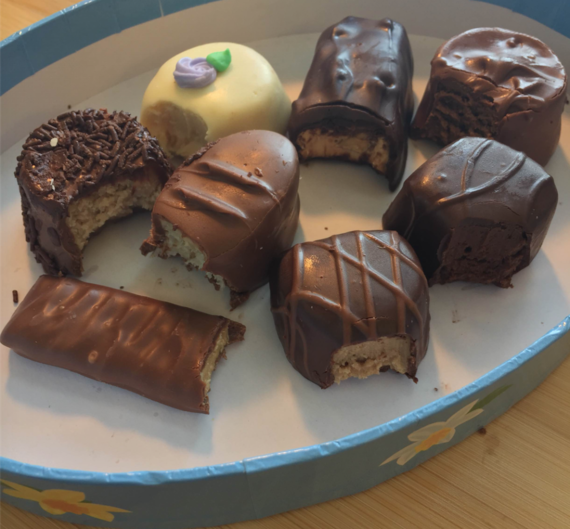 Use your brain and vision to help you curb your eating. Wansink found a few interesting psychological behaviors around eating:

We are pretty bad at knowing how much we have eaten and how much we want to eat, so keeping the visual evidence and setting ourselves up to see exactly what we have consumed sets us up for natural stoppers.

You have probably heard this one before, but it is worth reminding you: 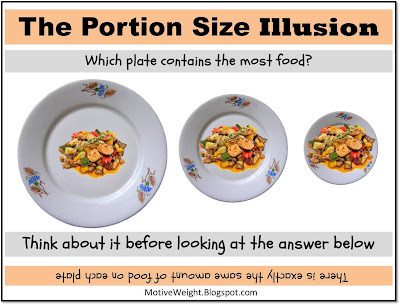 This post and the book are filled with tiny changes. Wansink gives an interesting tip to change small habits one day at a time. He recommends trying to implement three changes each day and keeping track with a simple chart. Make a chart with a column for each day of the month. Then put three small changes on the right side. As you go through the month put a check near each one. It's okay if you skip some, but every check adds up to 100-200 less calories which adds up to significant poundage at the end of the month. Here's mine for the first few days of April:

My three small changes were:

This chart was kinda fun to do and helped me see the hundreds of calories adding up!

One concept Wansink introduced me to was the idea of a food narrative or food story. Our favorite foods all come from an emotional place. He builds mental maps of where cravings come from. I decided to do this for myself with one of my favorite foods: DONUTS. I frickin' love donuts. I decided to dig deep into what my emotional ties are to the food. Here's what I came up with: 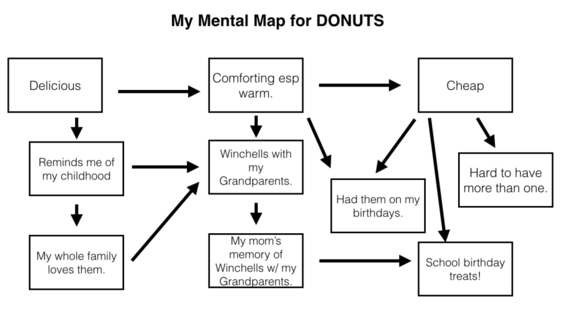 I loved learning about the hidden forces that drive my eating. I am definitely a more conscious eater and have optimized my kitchen to make eating healthy a bit easier. I hope you have some changes you can implement right now!