We're living in a golden age of happiness -- the scientific study of happiness, at least.

The field of positive psychology has exploded in growth since its inception in 1998, dramatically increasing our understanding of human flourishing. We now know more than ever about what makes us happy, how we can spread happiness socially and geographically, and how happiness affects our physical and mental health.

But it's just the beginning. In the next decade, we're likely to see not only a greater understanding of positive emotions, but also the application of this research on a practical level to improve well-being on a global scale.

"Positive psychology has just scratched at the surface of the benefits of topics like meditation, gratitude and forgiveness," Emma Seppala, Ph.D., a positive psychologist at Stanford and associate director of Stanford University’s Center for Compassion and Altruism Research and Education, told The Huffington Post in an email. "The next decade of research will dive deep into these topics."

Already, this burgeoning research offers valuable tools for each one of us to bring more joy into our own lives and the lives of others. In honor of HuffPost's 10th anniversary, here are eight scientific findings about happiness from the past decade -- and reasons why we'll be happier in the future, too. 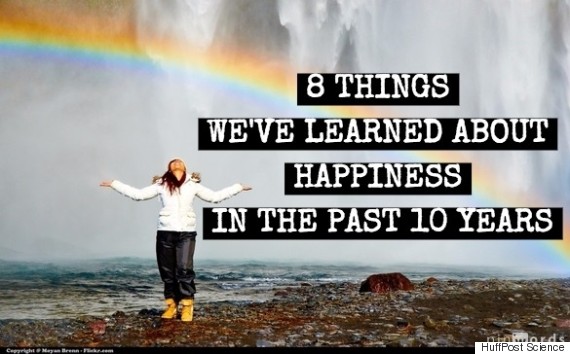 1. We get happier as we get older.
Although we tend to focus on the downsides of aging, a robust body of research suggests we've got a lot to look forward to as we get older. One survey conducted in 2013 found 23 and 69 to be life's two happiest ages. Other data suggests that after happiness levels drop around mid-life, they tend to increase steadily into old age. One conducted by Duke University researchers in 2006 found that 70-year-olds tended to rate themselves as being happier than 30-year-olds did.

Why? Greater appreciations for life's little triumphs and acceptance of life's trials likely play a role, as well as lower stress levels.

"As we age, we have the opportunity to accept who we are, instead of focusing on who we feel we need to become," psychoanalyst Ken Eisold wrote in Psychology Today. "We relax into being ourselves."

"As we age... we relax into being ourselves."

2. You can rewire your brain for happiness.
One of the most amazing things about the human brain is neuroplasticity -- the brain's capacity to rewire itself in response to new experiences.

We can actually wire our brains for happiness by focusing our attention on positive experiences and emotions, says neuropsychologist Rick Hanson, author of Hardwiring Happiness: The New Brain Science of Contentment, Calm, and Confidence. When you linger on a positive experience, it becomes encoded in your neural chemistry. Linger on many of these experiences, and the connections become strengthened over time and easier to retrieve.

“The longer the neurons fire, the more of them that fire, and the more intensely they fire, the more they’re going to wire that inner strength –- that happiness, gratitude, feeling confident, feeling successful, feeling loved and lovable," Hanson told HuffPost in 2013.

3. Happy mind, healthy body.
More and more science is revealing the depth of our mind-body connection. We know now that cultivating a positive state of mind isn't just good for your mental health -- it can also keep your body healthy and protect you from disease.

4. Social connection is key.
Human beings are social creatures, and the quality of our relationships is inextricably linked with our physical and mental well-being.

"Over a given period, people who have strong ties to family, friends, or coworkers have a 50 percent greater chance of outliving those with fewer social connections," CNN medical correspondent Dr. Sanjay Gupta wrote last year. "If our relationships can have such an effect on our overall health, why don't we prioritize spending time with the people around us as much as we do exercising and eating right?"

5. We can thrive in the face of life's challenges.
The field of post-traumatic growth -- which investigates how people not only survive but come to thrive in the wake of adversity -- is one of the most exciting in all of psychology right now, says Dr. Scott Barry Kaufman, a psychologist at the University of Pennsylvania.

"I believe we need to move beyond positive emotions and incorporate trauma and anxiety, and investigate how these 'negative' emotions can lead to greater personal growth and well-being," Kaufman told The Huffington Post in an email.

6. We're happier when we're helping others.
Being kind to others is a fast track to happiness. Volunteering makes people happier and boosts their longevity, according to a 2013 review of studies from the University of Exeter.

Helping others may also be an effective way to combat feelings of disconnection in our increasingly online lives.

"Too much use of technology can actually isolate us and make us lonelier," Kaufman told The Huffington Post. "Also, generations appear to be getting more and more narcissistic and self-focused, and we know that’s not conducive to well-being. I think we will only be happier in the future if we can figure out a way to harness new technologies for the benefit of helping others."

An added benefit? Kindness is contagious.

7. Lasting happiness is born of purpose.
"Happiness cannot be pursued; it must ensue," Austrian psychiatrist and Holocaust survivor Viktor Frankl wrote in his 1946 manifesto Man's Search for Meaning. "One must have a reason to 'be happy.'"

In recent years, psychologists have demonstrated what Frankl long held to be true: Happiness doesn't just come from chasing pleasure or positive experiences. As mounting research has demonstrated, sustainable happiness (and good health) comes from having a deep sense of purpose in life.

Studies have shown that a sense of purpose and meaning increases well-being and life satisfaction, boosts self-esteem and can even ward off depression.

8. Mindfulness is a gateway to happiness.
You don't have to be a veteran yogi or a meditating monk to make yourself at least "10 percent happier," as ABC anchor Dan Harris says, through a mindfulness practice. Studies have shown that meditation boosts positive feelings and psychological well-being, in addition to warding off stress, depression and anxiety.

"Research suggests that we are happiest in the present," Seppala told HuffPost. "We will be happier in the future, if we learn to be present!"