Little 11-year-old James had a big, impractical idea. He was going to graduate from high school. Before you dismiss what would seem a pretty average accomplishment for most, consider his story.

James lived in rural, war-torn Uganda. He lost his entire family to disease by the time he was six and was raised by his poor grandmother who didn't earn enough for the $130/quarter tuition.

A high school diploma was not in the cards for James. You could hardly blame him if he saw his goal as impossible and gave up to go work in the fields.

But he didn't. Instead, he and his grandmother devised a crazy plan that would secure the financing he needed to finish school. All he needed to start was a goat to sell. His grandmother was able to sell one of hers and, with the proceeds, James was able to buy shoes, a change of clothes, and a ticket for an 8-hour bus ride to the capital city where he'd stay with his aunt.

That's where the plan gets really interesting. To get the money necessary for school, he needed to sneak into the president's compound and ask for help. He'd have to scale a barbed-wire fence and get past the armed security guards but once inside, he learned, he'd be greeted warmly and given money for tuition.

Making excuses and giving up would have been easy. The hurdles between 11-year-old James and James of today were immense. But something deep inside compelled him to take responsibility for his life and do whatever it took to realize his goal.

At the age of 11, James had mastered his psychology and brought his dreams to life. His story is heroic, but it's also well-explained by science. Regardless your situation in life, there's a direct link between the excuses you make for yourself and how much success you achieve.

If you have big plans for yourself -- but you see immense hurdles in front of you -- you'll need to learn to be like James.

We've all experienced disappointment. You don't get the promotion you wanted. You fail a test. An important relationship crumbles.

When this happens, you have two choices for how to respond. You can ask yourself, "What could I have done differently?" Or, you can tell yourself, "It wasn't my fault. There was nothing I could have done."

If you choose the second option, the science says you're doomed.

The more excuses you make, the worse you'll do in school. But why? Not enough research has been done to draw a definite conclusion, but I have a theory. 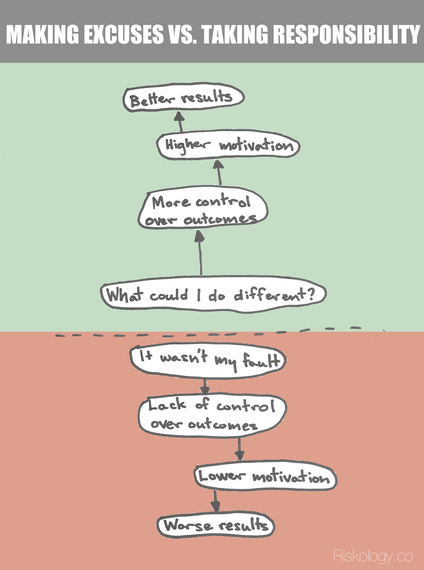 Making excuses has a cascading effect on how you behave in the future. An excuse is a way to externalize your failures -- blame them on something else. We've all done it. And we all know why we do it. It makes you feel better!

But, when you externalize failure, it also makes you feel like the outcomes in your life are out of your control. When you lack control, it's pretty darn difficult to find motivation work harder. And, when you lack motivation, your performance suffers. That chain reaction pretty much ensures failure not just now, but spiraling into the future as well. Pretty bleak!

Of course, that's only one path. You can take another.

James Robertson (yes, another James) has been offered a new car, multiple times, by complete strangers. Someone offered to chauffeur him around each day. Other's have offered to pay the insurance bill for whatever new car he ends up with.

Why on Earth is this generosity coming to him? Because The Detroit Free Press wrote an article about him. And why did they do that? Because he walks to work every day. Not that impressive, you say? I haven't mentioned how far his foot-powered commute is: 21 miles. [3]

James is loyal to his job. That's why, when his car broke down and Detroit buses stopped serving his route, he woke up one morning and just started walking. And then he kept doing it.

"Tough times don't last. Tough people do." That's what James' dad told him. I guess it stuck. When people heard about his daily marathon commute, people across the country jumped at the opportunity to help.

That's right in line with what researchers at The University of Missouri-Columbia found when they studied the connection between future commitment -- the resolve to make something happen -- and excuse making. They tested the excuses their subjects would make (or not make) while completing tasks and how that lined up with their resolve to improve. Unsurprisingly, those who made the fewest excuses were the most committed to improving themselves. [4]

The point of the story is not so much about generous strangers as it is about what created them. Who would blame James for giving up in such a dire situation? He could have quit, gone on public assistance, and felt sorry for himself. This wasn't his fault.

James didn't look at it like that, though. That's why strangers are rushing to lend a hand. And it's why people who take responsibility for their own situations -- regardless if they deserve the blame for it or not -- end up in a better place.

If making excuses allows you to externalize your failures, then taking responsibility does just the opposite. Taking responsibility leads to introspection. You study everything that went wrong and you ask yourself, "What could I have done differently" and "What can I do now to fix it?"

How To Take Responsibility For Yourself

We all want to be the best we can be at whatever we do. But excuses are easy to make, and genuine commitments to improve are hard.

If you want to be the person who takes responsibility and gets what you want, it could all come down to the stories you tell yourself when you feel overwhelmed or fail.

Today, take a second ask which of those stories you tell. What excuses are you making in your own life? And how could you change the story you tell yourself to make success more likely?