It's a staggering paradox, when you think about it.

We live in a country, the United States, that boasts the finest universities in the world. It's a country that invests far more in scientific research than any other nation -- the president's total 2011 budget request for research and development is $148.1 billion.

We're the globe's scientific leader, then -- but there's no telling how long it will last. We're allowing ourselves to fall behind other countries in science education and clean energy innovation, and behind what the times require in medical research. Meanwhile, the U.S. public barely seems aware of what's wrong, what's being missed, why science matters to their lives.

The Tea Party is the latest incarnation of Americans' scientific cluelessness. It has impelled a field of congressional candidates who overwhelmingly deny one of the most central conclusions of modern earth science: Human beings are driving a dramatic change in global climate that will unleash increasingly severe consequences in our lifetimes and well beyond.

But this latest politico-scientific transgression emerges against a broader backdrop of American scientific disengagement. We've all heard the statistics about how large percentages of our fellow citizens don't know how long it takes for the Earth to revolve around the sun, or reject the scientifically established theory of evolution. But I'm more disturbed by polling figures on the public's general distance from the scientific world. Figures like these:

These kinds of statistics have consequences. Take clean energy, the industry of the future. Globally, the clean energy economy is booming -- and China is now its clear leader. The U.S. fell into a distant second place last year in clean energy investment and finance, as China spent $ 34.6 billion to our $18.6 billion.

A similar story emerges in the biomedical arena, where our research investments haven't kept pace with national health priorities. For instance, Alzheimer's disease is now the seventh leading cause of death in the US, and accounts for 34 percent of total Medicare spending. Yet in terms of research, it's a stepchild: Funding through the National Institutes of Health is currently less than $ 500 million per year. 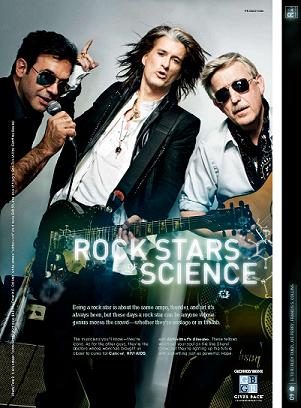 How do you make Americans more focused on the centrality of science to our future? It isn't easy given the nature of our national conversation -- with serious science news vanishing from the media -- and our already limited attention constantly directed elsewhere, including debating whether to elect global warming denying candidates to Congress this November 2.

One initiative I've begun working with to help counteract this trend is the Geoffrey Beene Gives Back® Rock Stars of Science ™ campaign (100 percent of net profits from this designer menswear brand funds cancer research and other causes). The idea is to pair together researchers with top musicians -- e.g., Joe Perry meets NIH director Francis Collins, who actually happens to be a guitar player, pictured at right -- to raise the visibility of the scientific life and endeavor, and to call for a greater commitment to finding cures to the most devastating diseases. The first installment appeared as a public service ad in GQ last summer, and the next one hits just after the election, in GQ's December "Men of the Year" issue.

The point to emphasize here is that our scientists are heroes, not geeks. They're the last caste of explorers, and represent the very epitome of passion for a career. They don't do what they do for personal enrichment, but rather, because they get a crack at solving the greatest remaining mysteries. Their lives are adventure stories.

We need to mobilize American kids to want to be scientists; and American adults to see how science -- and the policies tied to it -- affect to their lives and our future. Science has to stop being something those strange other people do; it has to be something we all live and breathe.

In this context, if a group of rock stars can cast some refracted light -- if that's what it takes -- then so much the better. We'll all benefit in ways each of us can understand -- in health, jobs, prosperity and quality of life. And, oh yeah: We'll understand ourselves, and the universe, a little bit better.

Now that would really rock.