What color is it?

That question had just about everyone with a social media account scratching their heads on Thursday, when 21-year-old Scottish folk singer Caitlin McNeill posted a photo of a dress on Tumblr.

"Me and my friends can’t agree and we are freaking the f*ck out," McNeil wrote in the photo's caption--and they weren't the only ones who couldn't. Some people saw the dress as white and gold, while others say it as blue and black.

The dress really is blue and black, so why do some perfectly sane people see it as white and gold? Here comes the science. 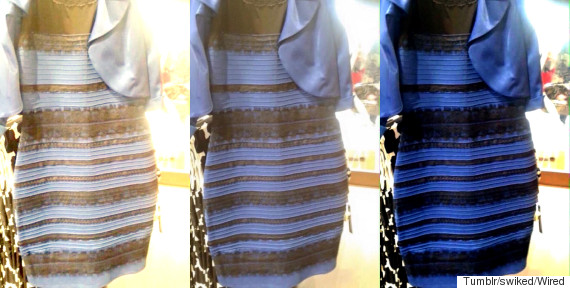 "It's a phenomenon known as color constancy," Mitchell Moffitt, co-creator of the YouTube series ASAPScience, says in a new video (above). "People who picture the dress as white have brains who may be interpreting the dress in a blue-lit room for example... It makes perfect sense then that the white dress would be tinted blue and that the gold color wouldn't really change."

In other words, our brains automatically adjust our color perception depending on the context in which something is viewed.