Over the past few years, there has been a troubling rise in the number of individuals claiming that scientific collections contribute to species loss. These accusations are often filled with hyperbole, characterizing the practice of field collecting as indiscriminate, unnecessary, and barbaric -- sometimes going so far as to describe it as "slaughter." In a recent piece, the scientific collection of a single bird -- a mustached kingfisher in the Solomon Islands -- was portrayed as the "totally unnecessary killing of this remarkable sentient being."

While debate in science is vital, these criticisms erroneously conflate the individual rights of a single specimen with species survival, vastly overstate the impact of scientific collections on populations, and minimize the specimen's value in helping us understand -- and protect -- the natural world. They tend to overlook several other facts as well: 1) Field research sites require detailed project descriptions and justifications from scientists before they grant collecting permits, and such projects invariably include demonstrations that collections won't impact species survival; 2) scientific institutions require detailed protocols, which always include humane euthanasia methods, before authorizing collections; and 3) an indiscriminate approach to collecting would not only defeat the purpose of conservation but also that of scientific collections themselves, which is to selectively sample organisms from specific locations to help us better understand those organisms and ecosystems. 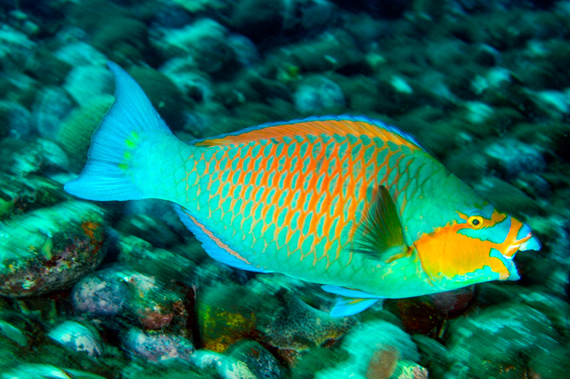 The vast majority of the data used to evaluate the conservation status of groups like parrotfishes came from specimen collections. Photo by Luiz A. Rocha.

With all these safeguards in place, why then are scientific collections so often attacked and mischaracterized? The answer is simple: Collections are easy targets.

Collection databases are nothing if not thorough and now they're easily accessible online, so it is possible to know exactly how many specimens of each species have been collected in a given place -- even if the scientific reasons for collecting them aren't clearly stated. Combine that with the IUCN Red List of Threatened Species and you have an easy, but crude, way to assign blame, simply by determining which threatened species were collected where, and by whom.

Critical information, such as the actual ecological reasons for species decline, is typically overlooked by those who find it simpler and easier to target the practice of scientific collection. For example, the collection of a New Guinean bat previously thought to be extinct was recently portrayed as unnecessary. What the article's author failed to recognize is that the only reason we know that the bat is not extinct is it's very collection -- there is no way to identify it without a specimen. In addition, its rediscovery (only possible because of the collection) might be the only thing that stops further habitat destruction and the eventual extinction of the species and possibly many others in the area.

As with the New Guinean bat, the rediscovery and collection of the mustached kingfisher in the Solomon Islands might just be the trigger necessary to slow down, or even stop, logging companies from destroying what's left of this species' habitat. It will also help to shed some light on the other main threat to this spectacular bird's existence (and many other endangered birds out there): domestic and feral cats. Although the impact of cats on bird populations in the Solomon Islands is not well studied, the fact that they kill an estimated 3.7 billion birds every year in the U.S. alone, suggests that they are a much greater threat to mustached kingfishers than scientific researchers are.

Another theme common to criticisms of scientific collection is that researchers should surely be able to gather all of the information they need from photographs and tissue samples. While this is true for many species -- and that is exactly what we do when studying those -- it is not the case for a lot of others. For many organisms, a photo is simply not enough to confidently identify a species, as illustrated by the classic example of the ivory-billed woodpecker. In 2005, an article published in Science magazine declared that the species still persists in the U.S. The article's only evidence: grainy video footage. A heated debate quickly followed this publication, and the conclusion was that we do not know if the ivory-billed woodpecker was in fact the bird in the video. The whole debate would have been avoided if a single specimen had been collected, and most importantly, confirmation of the species' existence would have immediately triggered powerful measures to protect its habitat, thus ensuring the woodpecker's continued survival -- if, in fact, it still existed.

In the case of the mustached kingfisher, this was the first and only male specimen ever collected of this species. Even if a photo had been enough to identify it, a specimen is not only a more reliable record, but can be used for many other types of advanced studies, such as disease screenings that are not possible without the entire specimen. A single specimen in a scientific collection is not a threat to the species' existence; instead, it is an invaluable resource that can be used in the future in ways that we can't possibly imagine today. Clearly, naturalists who collected during the 1800s had no idea we would be sequencing DNA of their specimens today, or using their location information to track the spread of disease or the impacts of climate change.

Data contained within scientific collections are invaluable and are routinely used to inform conservation decisions. Over the past 10 years, I have been involved in evaluating the conservation status of hundreds of reef fish species, including charismatic taxa such as groupers and parrotfishes, and 90 percent of the data used in those evaluations (including abundance, distribution records, age, growth, etc.) would simply not exist if we hadn't collected specimens. If, as suggested by critics of scientific collections, we stop collecting now, there will be no data with which to re-evaluate these species 50 or 100 years from now.

Here is what I propose instead: that we continue collecting responsibly (as we currently do) and that we focus on the real major threats to species' survival: habitat degradation, overexploitation, and invasive species.