An in-depth look into Melville's shaky science? Might as whale.

Scrutinizing the science of Moby-Dick is definitely beside the point, especially because there's evidence in Herman Melville's notes that he purposely skewed facts to bolster his story. Melville even wrote a friend saying he embellished things writing, "To cook the thing up, one must needs throw in a little fancy."

But the rambling scientific musings of the character you're supposed to call Ishmael are often so maligned by high school and academic readers alike that noting a few places where the facts are all wrong seems a worthwhile exercise. Today, November 14, is the anniversary of the United States release of Moby-Dick, so it's as good a time as any to knock it down a peg leg. 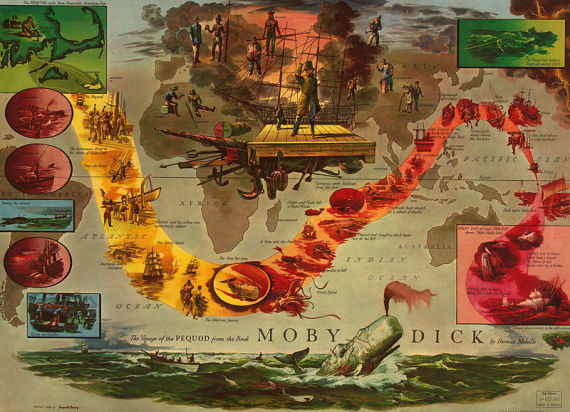 It was discovered in the 1930s that Herman Melville owned a copy of Thomas Beale's The Natural History of the Sperm Whale and based much of the "science" in Moby-Dick off of this book. From reading his notes in the margins of Beale's work, it can be determined that Melville purposely exaggerated the size and ferociousness of his whale. Professor Steven Olsen-Smith of Boise State University writes in his "Introduction to Melville's Marginalia" about the specifics:

In the margins of his source Melville marked dimensions of the sperm whale's mature length, its tail and blubber, and bones. Then, in manuscript composition, he systematically enlarged upon what he had marked, adding six feet to the length of the sperm whale, and nearly four to its circumference, six feet to the width of the tail, more than two feet to the span of its largest rib, an inch to the thickness of its blubber, and half an inch to the width of its terminal vertebra.

While making the sperm whale seem larger than it truly is, Melville also made other competing whales in the sea smaller than what he read in Beale. In the chapter "The Fossil Whale," Melville writes, "To produce a mighty book, you must choose a mighty theme. No great and enduring volume can ever be written on the flea." Melville is hyping Moby Dick into a monster to create a better fish story (more on Melville classifying whales as fish in a second.)

Other deviations of Beale's work that make Moby Dick into a more atypical monster include that sperm whale's teeth are supposed to have a row of cone-shaped teeth while Moby Dick has rows of sharp ones, a move sperm whales make with their tails to avoid running into ships is characterized as menacing when Moby Dick does it, and sperm whales are usually very peaceful creatures while Moby Dick is not. The monster instinct of ramming ships is based off stories Melville heard of Mocha Dick and the whale that sunk the Essex, but that behavior is atypical. Once again, this is a purposeful scientific inaccuracy that Melville is making. When describing killer whales in the cetology section, Melville writes that the name seems redundant, "For we are all killers, on land and on sea; Bonapartes and Sharks included." Moby Dick might not have been a killer if it weren't for the harpooners, but it was always possible.

Much of Ishmael's basis for his own classification of whales by size and for saying, "a whale is a spouting fish with a horizontal tail," is that the character feels as if current whale wisdom is essentially terrible and that he might as well come up with his own classification. Talking about the science of whales, Ishmael says, "though of real knowledge there be little, yet of books there are a plenty," and then lists out the literature that features whales, written by authors of whom only a handful actually saw whales. Then he narrows and says, "there are only two books in being," that get the sperm whale right, one of which is the Beale book mentioned before and the other of which is Frederick Debell Bennett's Whaling Voyage Round the Globe. So Ishmael concludes, "As no better man advances to take this matter in hand, I hereupon offer my own poor endeavors."

It is obvious that Ishmael's Cetology section is completely different than our current understanding, but it was never supposed to be a "correct" classification, it simply was a classification. What's funny though is that Ishmael's belief that any classification could do was almost immediately debunked when Charles Darwin's On the Origin of Species came out just eight years later than Moby-Dick in 1859. Whales were definitively shown to be mammals and spending a very long time classifying whales by size almost immediately seemed scientifically ridiculous.

Further in Ishmael's "lol" approach to science, Ishmael makes the claim, "That for six thousand years ... it should still remain a problem, whether [the whale's] spoutings are, after all, really water, or nothing but vapor -- this is surely a noteworthy thing." From Melville's notes in Beale's work mentioned above, it is clear that he knew that whale spoutings were made of vapor and that they were not spewing water.

Melville is trying extremely subtly to establish Ishmael as someone who doesn't exactly know what he's talking about and naively believes he can contribute to our scientific understanding, as it's a wide open field. Ishmael hunts whales for a living, and it's common wisdom that history is written by the victors in war. Is Melville establishing Ishmael as authoritative-seeming, but ultimately unreliable factually to show us he may be unreliable for other reasons as well?

For what it's worth, New York Times columnist Carl Zimmer argued in an essay entitled "The Science of Moby Dick" that the science of the time was truly spotty so it's hard to say exactly what is Ishmael, what is Melville and what is simply the accepted science of the day:

It would be unfair, though, to single out Melville for such mistakes. Naturalists in the early 1800s were just becoming acquainted with the world’s biodiversity, and they were overwhelmed by the animals they encountered– the gorilla in Africa, the duck-billed platypus in Australia, the lungfish in Brazil.

Moby-Dick is full of ridiculous similes that probably deserve their own article. In just the second chapter, Melville gives us, "like a Czar in an ice palace made of frozen sighs, and being a president of a temperance society, he only drinks the tepid tears of orphans." There's, "like that of a heart-stricken moose," and the super-bleak, "like a man cut away from the stake, when the fire has overrunningly wasted all the limbs without consuming them."

Although the science of ridiculous similes probably shouldn't be held to much scrutiny, let's do it anyway!

One simile that Melville got wrong was when he described Ahab leading a group of boats writing, "Like noiseless nautilus shells, their light prows sped through the sea; but only slowly they neared the foe." Unfortunately for Melville, Beale actually had the science wrong about the nautilus, a marine mollusk. In more of the writing of the previously mentioned professor Steven Olsen-Smith, it's explained:

On the same page as Natural History Melville read of the "argonaut, or paper-nautilus," as being endowed with a shell light enough to float on the surface of the sea and a thin membrane it employs as a sail while using "its tentacula as oars on either side, to direct as well as accelerate its motion." Discredited by modern marine biology, Beale's description of the nautilus prompted an annotation by Melville.

Cue Nelson pointing at Herman Melville and laughing, "Ha-ha!" Really nothing Melville could have done there.

Let's further pedantically pick apart Melville's similes! A couple more examples would be his writing: "Like oysters observing the sun through the water" and the classic "blind as a bat." Oysters don't observe things -- they're basically considered vegan-approved now -- and bats aren't blind. Get it together, Melville! 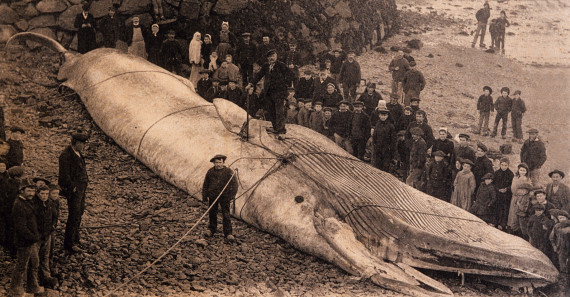 In Chapter 105, "Does the Whale's Magnitude Diminish? -- Will He Perish?" Ishmael argues that the whales shouldn't be compared to the nearing extinction of the hunted American buffalo as they have fortresses that are "impregnable" and are essentially a worthy foe to harpooners. Ishmael explains:

Forty men in one ship hunting the Sperm Whales for forty-eight months think they have done extremely well, and thank God, if at last they carry home the oil of forty fish. Whereas, in the days of the old Canadian and Indian hunters and trappers of the West, when the far west (in whose sunset suns still rise) was a wilderness and a virgin, the same number of moccasined men, for the same number of months, mounted on horse instead of sailing in ships, would have slain not forty, but forty thousand and more buffaloes; a fact that, if need were, could be statistically stated.

Ishmael is a hunter and he is giving his own spin. Unfortunately the sperm whale and many others are in fact endangered as harpooning became more sophisticated and oil more sought after. The bad science here is that the whale is not "immortal in his species, however perishable in his individuality" as Ishmael claims and therefore the justification for hunting Moby Dick should actually be less of an afterthought for the harpooners. 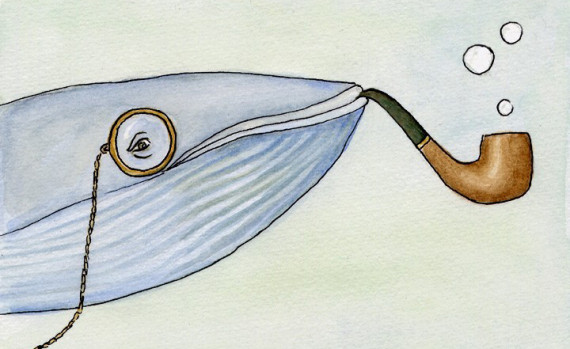 But still another inquiry remains; one often agitated by the more recondite Nantucketers. Whether owing to the almost omniscient look-outs at the mast-heads of the whaleships, now penetrating even through Behring's straits, and into the remotest secret drawers and lockers of the world; and the thousand harpoons and lances darted along all continental coasts; the moot point is, whether Leviathan can long endure so wide a chase, and so remorseless a havoc; whether he must not at last be exterminated from the waters, and the last whale, like the last man, smoke his last pipe, and then himself evaporate in the final puff.

The addition of bold and italics added here to point out the line about a whale smoking "his last pipe." Whales don't smoke pipes. That's bad science.