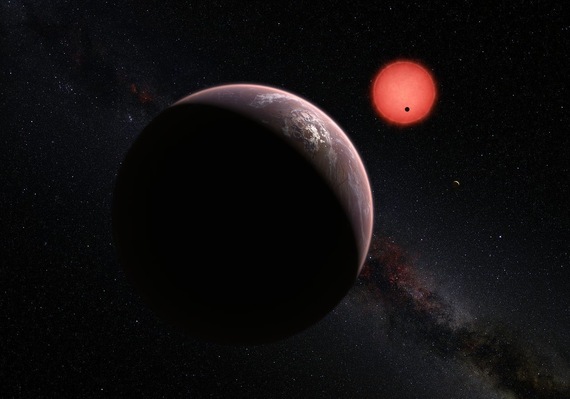 Monday's bombshell announcement that scientists found three new potentially habitable exoplanets raised our hopes of finding extraterrestrials more than any discovery beforehand. Now then, can we go there and see for ourselves if there are aliens?

The reason there's so much hype surrounding these three planets is because of how close they are to Earth. They orbit the ultra-cool dwarf star called TRAPPIST-1, which is just a mere 40 light-years from Earth. Granted, that's still a staggering distance in terms of how we operate here on this planet. In space, however, that's just a stone's throw away (well, maybe a really powerful throw).

Unfortunately, we're nowhere near the capabilities of making interstellar travel possible within a generation. Currently, Voyager 1 has traveled farther from Earth than any other spacecraft. At a distance of 12.47 billion miles, it is the only spacecraft to have reached "interstellar space." And it took the little guy 46 years to get there. One light year is several trillion miles long. We're all going to be dead before Voyager 1 comes close to meeting that distance. 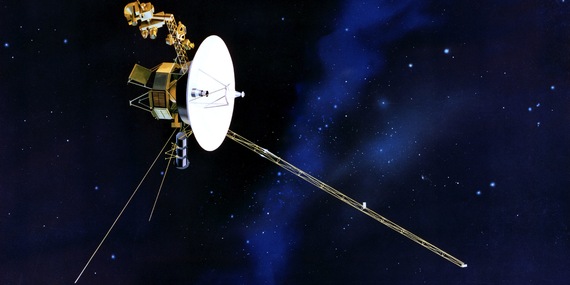 But we're getting better about interstellar travel. As experimental architect Rachel Armstrong told Inverse last year, one of the biggest impediments to long-distance travel is finding a propulsion mechanism that can get spacecraft to travel fast enough over long distances, based on sustainable technology. That means you have to make something light enough so it can accelerate quickly. It can't be weighed down by a finite amount of chemical fuel.

Perhaps this will be something radical, like the legendary EmDrive that's supposed to accelerate through space without fuel, based on ambient microwave energy. The EmDrive might become reality one day, but at the risk of sounding like a broken record, we're all going to be dead before that ever happens.

No, if we want to feasibly get us to TRAPPIST-1 and explore those three exoplanets, we'll have to think smaller and more lightweight in terms of spacecraft, and bigger in terms of launch and propulsion power. That's why there's so much excitement surrounding solar sails -- a technology we are actually building and testing these days.

A solar sail basically works because the material actively responds to photons and -- in the vacuum of space -- is pushed forward. The material for the sail is extremely lightweight, but also not very expensive to make.

That's exactly why the Breakthrough Starshot initiative, featuring hotshot minds like Stephen Hawking, is working to produce ultra-cheap spacecraft fitted with solar sails and launch them out to the Alpha Centauri star system at a fifth the speed of light. With just 4.37 light-years to travel, they could probably make the journey in just 20 years time.

The problem with that idea is that you need something very powerful to push those spacecraft out at such a high speed. Like, a million laser beams firing off at 100 gigawatts. Some scientists don't think that's as insane as it sounds, so hey -- if they work out the technological kinks and energy considerations, maybe it will work. 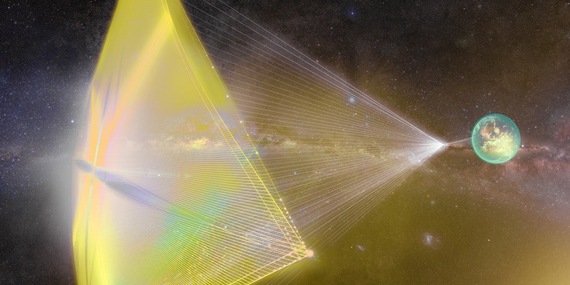 Artist's impression of the Starshot nanocraft.

Let's hypothesize we're able to get the Starshot project to successfully function and fire spacecraft off into interstellar space (and we'll ignore the minimal amount of data those spacecraft can probably collect). At a fifth the speed of light, if we fire off those nanocraft toward TRAPPIST-1, they'll make it there in about 200 years, give or take a couple decades.

So, two centuries worth of waiting. Is that worth investing in? While conventional wisdom would suggest spacecraft technology will improve dramatically before then and give us a much better shot at reaching TRAPPIST-1 and other stars faster if we just wait even one century, there's reason to be concerned.

After all, Voyager 1 is still the fastest spacecraft we've ever pushed out into space, with a heliocentric speed of 38,000 mph. That's about 3,000 mph faster than New Horizons, which just flew by Pluto and is now heading further out into the Kuiper Belt of the solar system. That spacecraft was launched in 2006. So in 36 years, we have slower spacecraft we're still launching into space.

That's all changing soon, hopefully. Even if solar sails aren't adopted as the game-changing technology many are hedging bets on, NASA and private companies will never stop trying to make more experimental and conceptual propulsion mechanisms a reality -- be it laser-based fusion, ion-harvesting power, the mythological EmDrive, or something else. There's no way we're going to settle for a 200-year journey just to see whether another world could support alien life -- or humans for that matter.