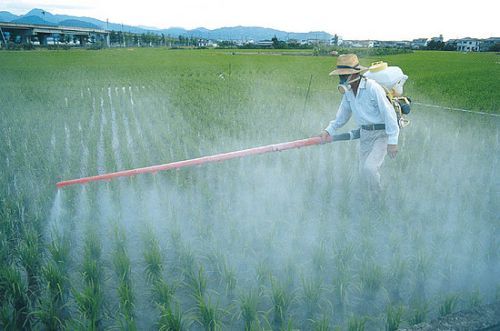 On Tuesday, a delegation of independent scientists urged the EPA to ban RoundUp, Monsanto's flagship herbicide at the O'Neill House Office Building in Washington D.C. Providing testimony that it poses an unreasonable risk to humans, animals, and the environment, scientists spoke at a closed meeting with EPA scientists and host Ted Lieu, (CA-33). The scientists explained the physiological reasons why exposure to glyphosate, the active ingredient in RoundUp, is linked to autism, Alzheimer's, cancer, birth defects, obesity, gluten intolerance, among other health issues.*

300 million pounds of RoundUp are sprayed each year on corn, soy, sugar beets, canola, and weeds in the United States alone. $5 billion, or half Monsanto's annual sales, comes from glyphosate-containing products.

Dr. Stephen Frantz, Pathobiologist Research Scientist led the team. "When a cell is trying to form proteins, it may grab glyphosate instead of glycine to form a damaged, mis-folded protein. After that it's medical chaos. Where glyphosate replaces glycine, the cell can no longer conduct business as usual causing unpredicted consequences with many diseases and disorders as a result."

RoundUp also harms crops' ability to capture carbon from the air, an important factor in fighting climate change. "Glyphosate negatively affects the soil microbiome," said Frantz. "It is destroying the ability of soil to be a nutritive medium for producing crops. Organic or biological regenerative agriculture is the solution for the sustainable agricultural sector and will conserve soil, air and water quality, and sequester carbon that helps to mitigate the climate crisis. We call for a ban on glyphosate."

Glyphosate is a patented antimicrobial. Frantz says, "by eating glyphosate-laden foods, we are exposed to a chronic, low dose antibiotic. This is likely causing antibiotic resistance and superbugs."

Moms Across America founder Zen Honeycutt was a participant at the meeting. Her son had been a casualty of processed foods, diagnosed with autism until his mother switched to an all-organic diet. "Mothers and caretakers are seeing their loved ones get sick on GMOs and glyphosate/herbicide sprayed foods and get better when they avoid them. Because glyphosate is contaminating our urine, water, breast milk and nearly all our foods, we are systematically causing sickness throughout America. For the sake of our country, this must stop. We simply cannot afford glyphosate."

Sterling Hill, DNA Research Scientist added, "Glyphosate is impacting DNA and causing disease. These diseases are skyrocketing and we will only see more of this if we do not put a stop to the use of glyphosate."

It is going to be incomprehensible to future generations how our generation could have let glyphosate poison the earth's ecosystems and destroy global human health for over four decades. --MIT senior research scientist Stephanie Seneff

The Deputy Director of EPA's Pesticide Programs said the EPA could take well into 2017 before a final decision is made whether or not they will re-register the chemical for continued use.

Frantz wants to see immediate action because he sees the use of glyphosate as outright poisoning of our food and soil. "By the end of 2016, the EPA will have something done and then comment periods, and then there's another step, and there's more comment periods, and this is like business as usual. The evidence we presented about this chemical being a glycine analog, that really should excite people. And I didn't see any excitement. It should upset people."

*For more information, please become a fan of this author for future articles.