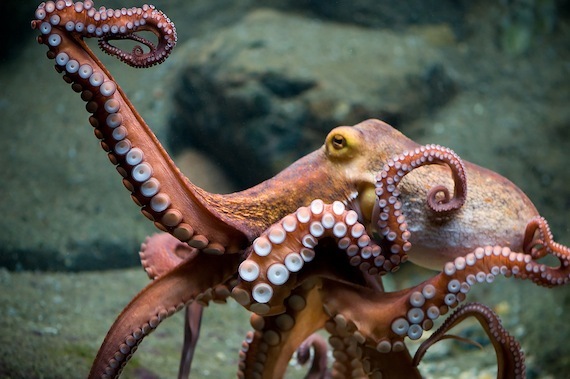 Finding a human mate is difficult enough. We at least, however, have bars and online dating sites. For the octopus, things can be a little more challenging.

Sure, there might be the proverbial "plenty more octopuses in the sea," but actually locating one in the vast ocean is no easy task. So when a male finds a female, he flies into action. What if there is competition for a female's interest? Mate-hungry males often make their move on the female first, before taking up arms against another male, according to recent octopus sex research. Especially if the female in question is young.

Most octopuses live no more than a year or two and spend nearly all of that time alone. These anti-social (cannibalistic) animals look for other octopuses only to mate, a rite of passage that may only happen once in their lives. It turns out, though, that we know very little about octopuses' mating habits (apparently even less than we do about cuttlefish and squid sex). We're mostly in the dark about how they find mates, how much males are willing to fight for a female and how much say the female gets in selecting the pop octopus of her offspring.

So scientists in Texas put out an order for a few dozen two-spot octopuses (Octopus bimaculoides) and played a little match making.

After acclimating the octopuses to the lab, the researchers placed a female octopus in a center holding section of a large tank. On either side of her, behind clear, removable barriers, they put a mature male octopus. The octopuses were allowed to check each other out -- visually and potentially through chemical sensing -- from behind the plastic walls for about an hour.

The two-spot octopus is most active at night, so researchers simulated a dark environment and waited until 8 p.m. to unleash the male krakens. When the hour arrived, the two barriers were lifted at the same time, and the three octopuses were left to their own devices for the night. A video camera captured the first hour of their amorous interactions -- when most of the action occurred -- and then snippets throughout the rest of the night. Details of the encounters were described in the journal Marine Biology.

How do these slippery animals do it? "Insertion of male hectocotylus [mating arm] into the female's mantle was initiated either by mounting her, or by probing her mantle with the hectocotylus from a distance," the researchers described. "Males typically settled a short distance from the female while maintaining the hectocotylus within her mantle." Males often guarded the female from the other male during -- and occasionally after -- mating.

But things didn't always go smoothly for the guy who thought he was getting lucky. The non-mating male often tried to interrupt the action, and six out of 10 times managed to do so -- and then go on to mate with the female himself. In about 10 cases, the females rebuffed the first male advances. In fact, the authors noted, sperm "transfer rarely occurred in the first mating attempt."

And sometimes things went quite differently. In one case, the males went right on the offensive and attacked each other first. And in another case, two males mated with the female at the same time.

In many trials both males ended up mating with the female at some point, a practice that has been observed in octopuses in the wild. The female will store the sperm until she is ready to lay her eggs, which will be fertilized as she lays them. In subsequent studies, using genetic testing, the researchers hope to discover more about which male -- or males -- end up becoming octo baby daddy to the egg clutch.

One of the more interesting findings of the research was that the female's age seemed to be a large determinant of what happened after the barriers were lifted.

Seven of the females were considered mature -- large, with large ovaries and ripe eggs -- whereas six were immature, without ripe eggs and about half the overall size of the mature females. The males actually seemed to be more aggressive toward each other when they were with an immature female -- "attacking each other sooner, more frequently and engaging in longer fights," the researchers noted. This suggests that the octopuses have a way of determining when a female is mature -- likely through chemical signals. ("They are also capable of sex recognition since they never attempted to mate with another male," the scientists wrote.) The researchers posit that males might have better odds of fertilizing more of a female's eggs if they are the first to mate with her, thus making these females even more desirable.

Of course, a small lab tank hardly replicates the vast Pacific Ocean, where these octopuses live in the wild. So, the researchers suggest that the repeated mating seen in the study might not be representative of what happens when octopuses encounter each other in a much bigger pond.

The octopus may be an invertebrate and a relative of the humble snail. But its love life is apparently not a simple affair. The study "shows that octopus mating dynamics may be more behaviorally complex than initially assumed," the researchers noted.

So for the octopus, too, we're learning: it's complicated.

Read more about the weird world of the octopus in my book Octopus! The Most Mysterious Creature In the Sea, now out in paperback.