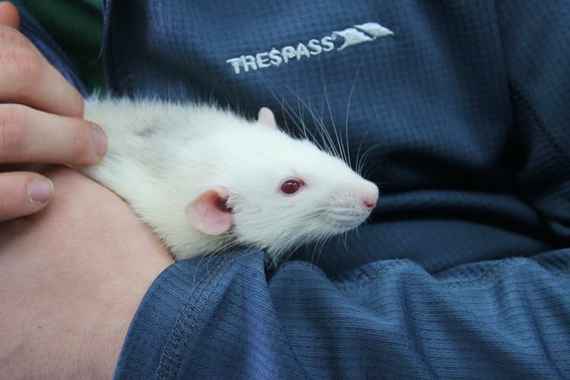 In 1994, researchers noticed that when rats anticipated an opportunity to play, they would let out a series of squeaky chirps. These were high-pitched, measured at 50 kilohertz. The researchers began to question whether these chirps might actually be ... laughter.

Scientists Jaak Panksepp and Jeff Burgdorf document this moment in their 2003 paper "Laughing Rats and the Evolutionary Antecedents of Human Joy?" In it, Panksepp and Burgdorf document how they and their team tickled rats for years. They noticed that the 50-khz vocalizations more than doubled when they tickled the rats versus when the rats were left to their own self-initiated play activities. They learned that just like humans, rats had ticklish spots, namely at the nape of their necks. And they noted that, like human children, juvenile rats found tickling to be a rewarding experience; they ran mazes and pressed levers eagerly, knowing the reward would be a giggle-inducing tickle.

"Across subsequent years we became increasingly convinced that we had discovered a true laughter-type response," they write. "We decided to remain open to the possibility there was some type of ancestral relationship between this response, and the primitive laughter that most members of the human species exhibit in rudimentary form by the time they are three months old."

For as far as we've come in our understanding of the brain, we still don't understand why we laugh. We know that emotional feelings are rooted within the action apparatus of mammalian brains. There's also strong evidence that mammals experience emotions very similar to humans: fear, rage, lust, care, panic, play. But laughing, at first glance, doesn't seem to serve an evolutionary purpose.

The uncertainty of human laughter and the ensuing debate over whether animals can experience the emotions humans do means that Panksepp and Burgdorf were blamed for committing the "sin of anthropomorphism," because subjective experiences are difficult to measure in both humans and animals. Their methodology was roundly criticized.

"It was hard to publish this kind of work, and it was ironic that the publication of our initial manuscript was impeded by prominent emotion researchers, some of whom take pains to deny that we can ever know whether animals have any emotional feelings," they wrote in 2003.

In the subsequent 13 years, that opinion -- that animals do not feel emotions akin to human emotions -- is steadily changing. Anthropomorphism is always a concern, but researchers increasingly can't deny that animals exhibit behavior that doesn't serve any evolutionary purpose -- like crows who slide down snowy hills for the apparent thrill of it and apes who enjoy being tickled (which tacks on another example that laughter might not be a uniquely human trait).

In his book, The Emotional Lives of Animals ecology and evolutionary biology professor Marc Bekoff writes:

"It's bad biology to argue against the existence of animal emotions ... Emotions have evolved as adaptations in numerous species, and they serve as a social glue to bond animals to one another. Emotions also catalyze and regulate a wide variety of social encounters among friends, lovers, and competitors, and they permit animals to protect themselves adaptively and flexibly using various behavior patterns in a wide variety of venues."

More researchers are proving that yes, rats do like to be tickled. In a 2012 study published in PLOS One researchers trained rats to press a lever in response to one sound tone, which meant they would get a food reward, and in response to another tone which meant they would get a little foot shock. Afterward, the rats would either be held or tickled. They measured the ultrasonic vocalizations of the rats -- those 50-kHz chirps -- and found that the noises in response to tickling were "positive emotions akin to human joy." These positive emotions, they argue, made the rats look forward to pushing that lever.

We might not yet have figured out what makes us laugh and if rats -- and other animals -- laugh. But hey: At least now we know rats are always down for a good tickling sesh.