One of the many bombshell allegations in the HBO documentary "Going Clear" explains how officials in the Church of Scientology keep in-depth records on everything its members say during private "auditing" sessions and then use their secrets against them. HuffPost Live's Caroline Modarressy-Tehrani found out just how deeply Scientologists' personal lives are probed during a discussion about the film on Monday.

The church officially describes auditing as a way to "travel to higher states of spiritual awareness" by answering "exact sets of questions asked or directions given by an auditor to help a person locate areas of spiritual distress." During these sessions, members reveal the most intimate and private parts of their lives, according to Sara Goldberg, a former Scientologist who left the religion in 2013.

"I was audited for 35, 36 years, so there's really no aspect of my life that wasn't asked about or touched on. I mean, to answer that question [would be like answering] what food have you eaten in your lifetime? Probably everything had been touched on and asked about," Goldberg told HuffPost Live.

But the most valuable information to come out of auditing sessions are the potentially embarrassing details that the church can use against members who wish to leave, according to John Sweeney, author of The Church of Fear: Inside The Weird World of Scientology.

"On the question of auditing ... the big thing is sex. 'Who did you have sex with? What was she wearing? What was he wearing? What did you do? What did they do?'" Sweeney said. "So is it possible that Scientology's great stars, Tom Cruise and John Travolta, fear that they're in a blackmail position -- they'll deny all of this -- but fear that they could be blackmailed by their sexual indiscretions?"

But the "fantastic interrogation tool" of auditing and the files that result aren't just a concern for famous Scientologists. Tony Ortega, who writes extensively about Scientology on his blog, said all members are fully aware their audits are being documented.

"You know as a Scientologist that when you go to these confessionals and these sessions that what you say is being written down and recorded and might be used against you later on, so any Scientologist has to worry about that, not just the celebrities," Ortega said.

In a statement to HuffPost Live, the Church of Scientology dismissed "Going Clear" as "one-sided, bigoted propaganda." In the film's defense, it ends with a list of high-ranking Scientology officials who refused to be interviewed.

Inside Scientology's Auditing Process: How Members Are Pushed To Reveal Their Private 'Sexual Indiscretions'
Celebrities Linked To Scientology 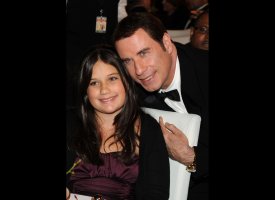