The worst thing that can happen to an attractive woman is not a car accident or getting fired or even losing a loved one -- it's getting fat. At least that's what the team behind the beloved cartoon Scooby-Doo seems to think.

In the new Scooby-Doo movie "Scooby-Doo! Frankencreepy," Daphne, a main character in the long-running animated franchise, is subjected to a terrifying "curse" -- growing from a “size two to a size eight." Oh, the horror!

Writers and producers seem to believe that the most sinister curse to place upon the resident pretty girl is to make her "overweight" -- a size eight, specifically, which is measurably smaller than the average American woman. An average woman in the U.S. weighs around 145 pounds and wears a dress size between 12 and 14. But yea, Warner Bros, a size eight must be straight out of every woman's worst nightmare.

[Warner Brothers had not yet responded to our request for comment at the time of publication. Scroll down to read their statement.]

The animators apparently don't understand what a size eight woman looks like (even though they can be seen everywhere, i.e. mothers, friends, random ladies on the street) since the "overweight" Daphne looks more like the blueberry ballooon version of "Violet Beauregarde from Willy Wonka" than an actual woman.

"It’s sad to think that my daughter can’t even watch a cartoon about a dog solving mysteries without negative body stereotypes being thrown in her face," writer Tom Burns poignantly noted for The Good Men Project. 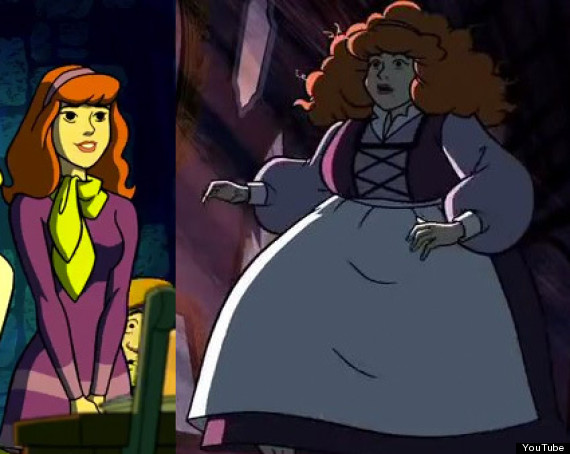 According to some Amazon reviewers, the "curse" may have been intended to promote self-acceptance rather than a negative body image. As user D.Davidson wrote (spoiler alert):

I was worried about [the movie] promoting a negative body image for women based on another review about Daphne being turned in to a "size eight" and her freaking out about it. I actually have to defend the writers here because Daphne realized she was being superficial throughout that story arc, it added to the story in a meaningful way (it allows her to evade iron face) and the most importantly: Fred didn't notice/care and said that she "always looked good to him." I would say it was more about acceptance and not being superficial than anything.

While we haven't seen the movie, we're certain there are better ways to use Daphne's fixation on her looks to teach a lesson about self-acceptance. "Why not have her cursed to look like one of the classic Scooby monsters (The Creeper or the Space Kook)?" Burns pointed out. "Why not cover her in hair and fangs and turn her into a wolf-girl? Why not give her a third eye, green skin, a tail?" Really anything other than stigmatize a clothing size, something known to be explicitly triggering for many women with body image issues.

Fat-shaming has permeated our culture so deeply that young girls are even getting barraged with negative body stereotypes while watching their Saturday morning cartoons. Leapin' lizards! We can do better.

Watch the scene where Daphne gets cursed below:

UPDATE: 8/21/14 9:30 a.m. -- Warner Brothers responded to our request for comment with the following statement:

All of our content is run through Standards and Practices, and there is always sensitivity to obesity and self image, especially when it comes to programming made for children and a family audience.

Although you are correct that Daphne becomes bigger in the course of the story, the message is actually a much more positive one.

The plot of the movie involves the Scooby gang becoming cursed and losing what means the most to each of them. Fred loses the Mystery Machine, Shaggy and Scooby lose their appetites, etc. Daphne loses her good looks (mainly her figure and her hair).

While Daphne is at first upset by the sudden change, there is a touching moment where Fred points out that he didn't even notice a change and that she always looks great to him.

At the end, when Velma explains how they figured out the mystery, she points out that the curse actually DIDN'T take away what means the most to each of them: their friendship.

The loss of Daphne's regular appearance is proven to be a superficial thing, and not what actually matters the most to her.