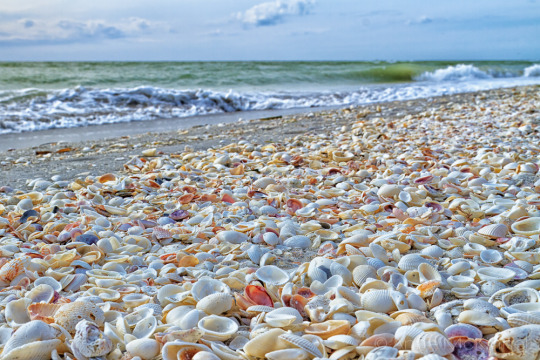 The Capital of Shelling.

Sanibel is one part of a two-part chain of islands off the West coast of Florida. The small barrier island off the southwest coast of Florida faces the Gulf of Mexico and is famous for the best shell collecting in the continental United States - some say the World!

Only 12-mile long and three miles across at its widest, the place is a bicyclers' paradise and cars are sometimes abandoned to favor walks and rides. With its pristine white sand shores and spectacular seashells, the bending exercise has become known as the "Sanibel stoop."

Each time we visit, we collect so many shells of all shapes and all colors that we could set up our own shell shop by now!

The amazing beaches are covered with the shells of various creatures, to a point where you need to wear plastic sandals or other waterproof shoes to walk the beach. When you'll hear the crunch under your feet while trying to go swimming, you'll know what I am talking about.

Colored broken pieces of beached glass are also to be had, but I prefer the intricate shapes of the wonderfully detailed seashells.

Why so Many Shells There?

The tribe Calusa Indians of Sanibel based their subsistence on the island's ecosystem and its seashells. They utilized the mollusks and their shells as efficient tools and decorative objects for trade.

The best time to go shelling is at low tide during a new moon, when the tides are lowest. Along years of visiting, we have found giant conch shells, the kind of habitat that can house a large animal crouched and curled up inside.

Pinks, oranges, blues, and every shade of white, brown and yellow, those magnificent shells are addictive to collect, and one of the reasons we always return to the island.

According to Ken Meeker, executive director of the Sanibel-Captiva Islands Chamber of Commerce, the reason for the millions of shells on the shores has to do with

"The Gulf Stream flows to the north, this is the only island around here extending east and west, and it serves as a trap for the shells as the Gulf carries them along, and since there`s not a sharp drop-off out in the water here, as in most places. A sharp drop-off leaves, in effect, a wall under the water, and the shells can`t get up over the wall very well so they stay out there in shell beds."

"Here, there is a long, gradual slope up to the beach, so they can get washed up in shallow water, and eventually up on the beach, where they die."

How to Get There?

Located away from Fort Myers and ending in Captiva Island, Sanibel is only accessible by a paying causeway. Sanibel has only two main roads.

The Sanibel Causeway spans the San Carlos Bay, from the mainland in Punta Rassa to Sanibel Island. The causeway is three miles long and has a $6 toll in effect for island-bound vehicles only. They only charge you to get there - it's free to leave!

Already in 1912, car ferries serviced Sanibel Island from the mainland. The idea of a bridge instead was highly controversial and clearly not welcomed by the early residents of the island. But by the mid-1950s, long lines of vehicles waiting to cross the bay, and frequent summer wildfires finally convinced the county to build a bridge, to improve access for firefighters. In 1967, the causeway was born.

What Else to Do on The Island?

The Ding Darling National Wildlife Refuge, a 6,354-acre protected natural preserve, home to hundreds of species of birds, some 50 types of reptiles, plus 32 different kinds of mammals.

With bike and walking paths, canoe trails winding among lush seagrape, salt myrtles, red mangrove, cabbage and sabal palms, nature walks are a big draw to the island. The area can be filled with mosquitoes in the summers, so better bring your own DEET insect repellent. But that's just the same precaution needed all over Florida.

Several beaches are open to dogs on Sanibel, and we sometimes rent a cottage for the weekend with direct access to the sand, where our Labrador can jump in the water right at dawn when the light is rosé and the air still cool. She knows and smells when we drive there and gets excited several miles before we even reach the bridge. 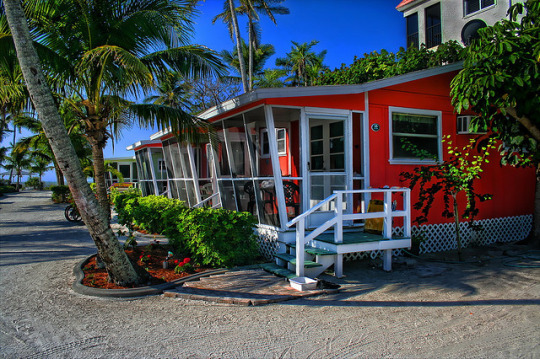 My kind of relaxation: doing NADA! Just putting one foot in front of the other is the extent of my weekend exercise while on Sanibel - but the salty air, the calm wind, the smell of sea water, all put me to sleep like a baby in lalaland.

The very silent nights also bring an amazing canopy of huge and seemingly close stars. Even my dog has learned to meditate while watching the deep blue heavens.

Be aware that the taking of seashells containing live animals is strictly prohibited on Sanibel Island, as well as in the rest of Florida - and that includes starfish and sand dollars.

Last time we were there, we saw a school of dolphins dancing right by our windows and having fun in the high surf. Life here is simple and quiet: we shell, we eat, we sleep, then repeat. 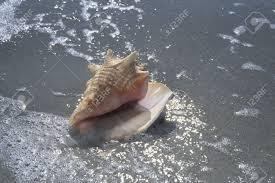